'I Have a Dream': Arvind Kejriwal Takes Oath as Delhi CM for Third Time

The AAP convenor's speech began and ended on grand notes, focusing on work done and future plans for the city. Arvind Kejriwal during his swearing in ceremony on February 16 at Delhi's Ramlila Maidan. Photo: Twitter/@AamAadmiParty

After Congress’s Sheila Dikshit, Kejriwal is now the only leader to become Delhi chief minister thrice.

Apart from Kejriwal, all the six ministers in his previous government – deputy chief minister Manish Sisodia, Satyendar Jain, Gopal Rai, Kailash Gahlot, Imran Hussain and Rajendra Pal Gautam – also took as ministers. The party has decided to retain its previous Cabinet in order to ensure continuity of its schemes and to implement its planned programmes.

Speaking after taking oath, Kejriwal began his address with “Bharat Mata ki…”. The audience in the grounds shouted “jai” back. He also encouraged the crowd to raise cries of “Inquilab zindabad” and “Vande mataram”.

Kejriwal thanked the people for voting him to power.

“My dear Delhi’ites today your son has taken oath as Delhi CM for the third time. This is not my victory, it is your victory, of every Delhi’ite, of every mother, sister, youth, student and family,” he said, adding that in last five years his government had “tried the best to provide some happiness and relief to every citizen and develop Delhi rapidly”.

Kejriwal assured that “this effort would continue in the next five years.”

He also declared that he would work for all.

“Some voted for AAP, some for BJP, Congress and other parties, but today I am the CM of all. In the last five years I have never meted out step-brotherly treatment to anyone. I worked for every area irrespective of who they voted for. I assure all two crore citizens that the election is now over and all citizens are now my family. I will work for all.”

Huge crowd gathered at Ram Leela Maidan to witness yet another historic event.

Sprinkling his speech with appeals, Kejriwal said, “All of you please call people back in your villages and say, ‘Our son has become the CM, there is no fear now’.”

Kejriwal also noted that there were “several big tasks to perform for Delhi”.

He sought the support of all citizens and parties in this.

“I cannot perform those alone, I want to work with all to make Delhi better and beautiful. Politics does happen in elections, I forgive my opponents for whatever they said. I urge them too to forget all that was said. We will work with the Centre to make Delhi the number one state. The Prime Minister could not come [to the swearing in] but I seek his blessing too to take Delhi forward.”

Clearly indicating that as he did 2013, when he left Delhi to fight the Lok Sabha polls, he still nurtures national ambitions, Kejriwal spoke about how his government’s work would now resonate in other states.

“Delhi’s people have given birth to a new politics of work, schools, hospitals, free and 24-hour power and water supply, good roads, safety of women, and that of making an India of the 21st century.”

He said his idea of politics was what his recent advertisement campaign spoke of with the slogan: “Jab Bharat Maa ka har bachcha achhi shiksha payega, tabhi tiranga aasman main shaan say lehrayega…’’ (‘When every child of an Indian mother gets good education, only then will the tricolour fly with pride’).

Similarly, he noted that national pride was associated with “safety and respect of women” and “provision of basic facilities to all citizens”.

“This is the new politics and it is taking root everywhere. From everywhere we are getting reports of state governments announcing mohalla clinics, making power free,” he said. Incidentally, with AAP seeking to expand in other parts of the country, it did not invite leaders of ‘secular’ opposition parties for the swearing in ceremony the way other chief ministers had done in West Bengal, Andhra Pradesh or Bihar in the past. 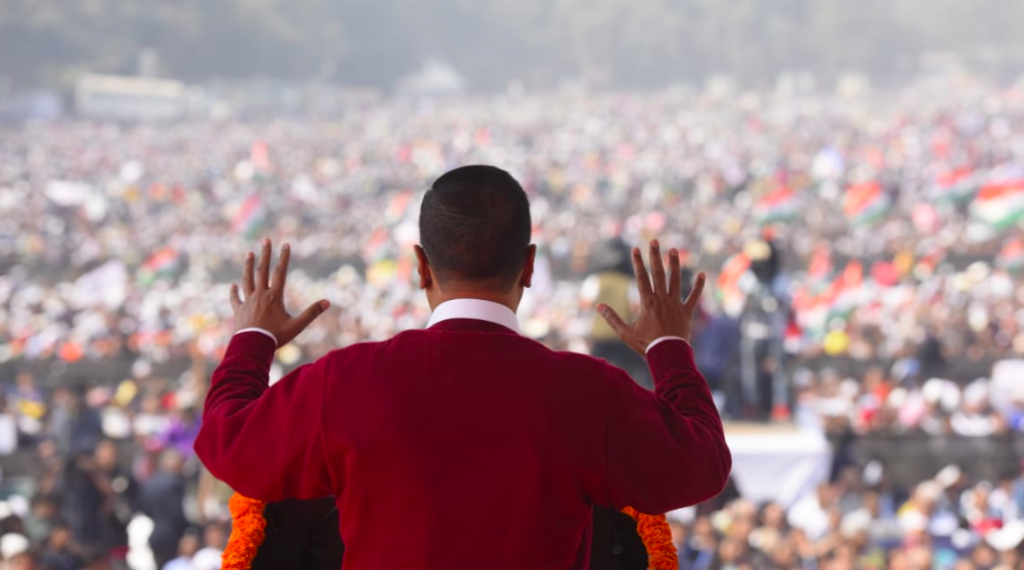 Arvind Kejriwal during his swearing in ceremony on February 16 at Delhi’s Ramlila Maidan. Photo: Twitter/@AamAadmiParty

Kejriwal also quipped that now in some states when a leader says government schools or hospitals cannot be made better, people cite the example of Delhi. “Delhi has redefined politics,” he said.

Citizens given pride of place on stage

For the swearing in ceremony, AAP also invited 50 citizens as “chief guests”. They were seated on the main stage. Kejriwal honoured them saying, “On our stage are our chief guests – people who have made Delhi. Delhi is run by its teachers, doctors, auto driver, rickshawwallahs, workers and traders.”

He even named a few of those present, like one Vijay Kumar, who studies in IIT Delhi; Dalbeer Singh, a former teacher of Najafgarh, who now works as a farmer; Nidhi Gupta, a Delhi Metro pilot; and bus marshal Tarun Kumar, who saved a six-year-old girl from being kidnapped.

“These are the people who run Delhi; leaders and parties come and go,” said Kejriwal.

The Delhi chief minister also defended his decision to make several services like water, power and travel free. “Some say Kejriwal is making everything free. All the invaluable things are free, a mother’s love for the child, a father’s staying hungry to support his child’s education, and Shrawan Kumar taking his parents on a pilgrimage. Kejriwal loves Delhi’s people, they love him back; this love is also free,” he quipped.

He then went on to ask if he should charge government school students for their education or the poor availing themselves of treatment in government hospitals.

He ended his speech with the song “Hum hongay kaamyab” (‘we shall overcome’), urging people to sing along.