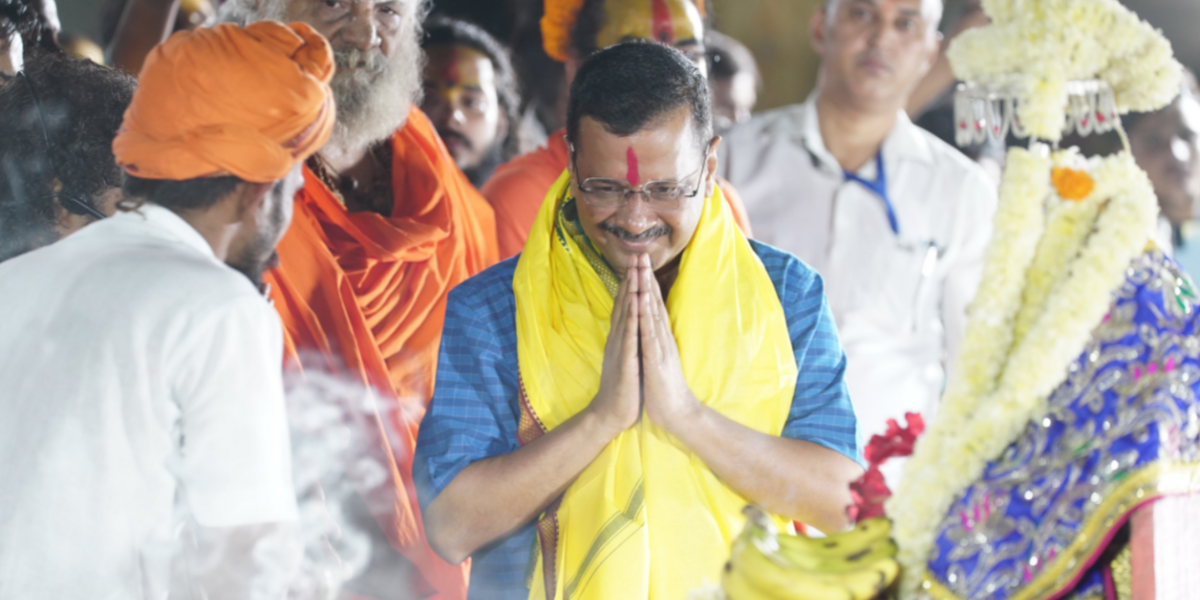 Jalandhar: Ahead of the Punjab assembly polls, taking place on February 20, Aam Aadmi Party (AAP) convener and Delhi chief minister Arvind Kejriwal had drawn heavy criticism from voters for a statement in which he talks about security fears among Hindu’s in the state.

“After the Prime Minister’s security lapse, Hindus and traders in Punjab are worried. They have fears about internal security,’ Kejriwal reportedly said on Tuesday, February 15.

AAP has emerged a major challenger to both the incumbent Congress, which is facing calls for anti-incumbency in Punjab as well as factionalism within the party, as well as to the Shiromani Akali Dal (SAD)-Bahujan Samaj Party (BSP) alliance in Punjab. AAP’s visibility on the ground has led to voters in some parts of the state talking about voting for change in the upcoming polls.

Kejriwal’s statement has been seen as an effort to play the ‘Hindu card’ in Ludhiana district and has invited sharp criticism, not just from the minority Sikhs and Dalits, but also within the majority Hindu community.

Among those who expressed resentment against Kejriwal’s statement is former Punjab Congress president and former member of parliament, Sunil Jakhar, who took to Twitter to express his discontent:

They aren’t gullible also. Any such scaremongering will not yield votes. https://t.co/VVwnjo1Z6F

In his tweet, Jakhar attached a clipping from news outlet Dainik Bhaskar which mentions Kejirwals claims that there are fears regarding internal security among Hindus and that Hindus have personally told Kejriwal about their worries. The news clip has gone viral on social media.

Many political observers had said that this time around, AAP is focussing on majoritarian politics in Punjab, pointing to the ‘Tiranga Yatra’ and ‘Shanti March’ the party held in select urban and Hindu-dominated assembly constituencies of the state, eyeing votes from the majority community  only.

During the Ludhiana event, Kejriwal also evaded a question on the Sutlej Yamuna Link (SYL) canal, a major issue related to river water sharing between Punjab and Haryana. Despite being an important issue for the agrarian economy of Punjab, none of the political parties have raised the SYL issue this time.

Also read: From ‘Only Sikh Can Be CM’ to ‘Why Not a Hindu’: Is AAP Trying to Polarise Punjab Polls?

A video of Kejriwal’s speech was also shared by News24 channel, in which he said, “…then that person (referring to the person who supposedly approached him with fears about security) told me that whatever happened in the past few days has him worried. The way the BJP and Congress indulged in dirty politics over the Prime Minister’s security lapse, it led to fear in the hearts of people, particularly the Hindus.”

Later, the AAP convener also spoke about other recent security-related incidents in the state, such as the recovery of tiffin bombs and drones from Indo-Pak border; the Ludhiana bomb blast; and sacrilege at the Golden Temple in Amritsar. “I want to assure the three crore Punjabis that when the AAP government will come to power, your security and that of every single trader will be our responsibility,” Kejriwal said.

What political experts have to say

“Punjab has a unique culture and history. It is distinct from that of other parts of the country. Basically, AAP leadership has failed to understand Punjab. The Hindus of Punjab are not like those from other states. Punjab has enjoyed Hindu-Sikh brotherhood for ages and both communities are culturally and economically connected with each other. The Hindus of Punjab are not in any danger. It is sad that Kejriwal is raking-up this issue just for the sake of votes,” Nauli said.

Further, Nauli said that the party’s focus on wooing Hindus is why people have begun calling it the BJP’s ‘B-team’. “They are following BJP’s agenda. Whether it is the ‘Tiranga yatra’ or the ‘Shanti March’, AAP has been using tricks to woo Hindu voters. Perhaps Kejriwal does not know that even in the worst period of militancy, nobody ever held a Tiranga yatra or peace march in Punjab. Even during the 1984 anti-Sikh pogrom, there was not a single incident of Sikhs attacking Hindus or vice-versa in the state. But people know how Kejriwal remained mum over the Citizenship Amendment Act (CAA), the abrogation of Article 370 and many issues affecting minorities,” he said, adding that Kejriwal has “attacked Punjab” through this statement.

The senior journalist also pointed out that there are temples in South India with boards outside that say only Hindus are allowed inside. “But that is not the case in Punjab. Here, none of the Hindu temples or Gurdwaras have ever put up such a message,” Nauli said.

Rakesh Shantidoot, former editor of Dainik Jagran, said, “During the 2017 assembly polls, AAP was banking on Sikhs, NRIs and hardliners. This time, they are targeting Hindu voters. The way erstwhile partners SAD-BJP divided Sikhs and Hindu voters’, AAP is trying to divide them along the same lines. That’s why they lost in the Doaba and Majha regions last time. Kejriwal might be playing the Hindu card but the fact is that Punjabi Hindus are not scared. There is no such difference between Hindus and Sikhs. Rather, the difference of opinion has remained between Hindus and ‘Arya Samajis’; Sikhs and ‘Nirankaris’. This is a desperate attempt from AAP to scare Hindus, which will not yield results.”

Shantidoot also said that Kejriwal should not forget how in the 2014 and 2019 Parliamentary polls, as a clear Hindutva-backed Modi wave swept the nation, Punjab still went against it. “Punjabis, whether Hindus or Sikhs, didn’t vote for Modi. Rather, they supported congress. Even Sikhs, which call the Congress their enemy because of the 1984 pogrom, voted for the Congress. The reason is that the Congress has a general acceptance among voters as a party of all communities. Also, Kejriwal is raising the Prime Minister’s security lapse issue because he felt that the Congress and SAD-BSP alliance was focussing on Dalit votes, so he is wooing the Hindus of Punjab by creating fear among them. But it will not work here,” he said.

Meanwhile, AAP spokesperson Neel Garg blamed the Congress for politicising this issue, saying, “Why should we create fear among a community? Look at the recent incidents of sacrilege, bomb blast in Ludhiana and drones in Punjab. Who is the mastermind of these incidents? Why did all this happen before elections? It is not AAP but the Congress which was trying to create fear in the minds of urban voters. We were also blamed for the Maur Mandi blast in Bathinda, which took place days before 2017 polls, but the Congress government never investigated the matter. A true nationalist will never compromise on national security and we are not creating any fear.”

Garg also called the allegations that AAP is not an urban party baseless, citing the party’s recent win in the Municipal Corporation polls in Chandigarh. “AAP is all set to form government in Punjab,” he added.

It is pertinent to mention here that a video of Chadha has also gone viral in which he questioned the Congress for not making Sunil Jakhar the chief minister of Punjab despite his being a Hindu. Chadha said the Congress did wrong by Jakhar just because he was a Hindu and that AAP feels for sad for him.

On social media, people were questioning Kejriwal for following the BJP’s ideology of doing majority appeasement. Twitter users were not only questioning AAP’s ideology but also the party’s use of fearmongering as a tool to woo voters as well as Kejriwal’s silence on the anti-CAA riots in Delhi in 2020.