The AAP government intends to bring a confidence motion in the Assembly to prove its majority and also to indicate that BJP has not been able to 'lure' any of its MLAs. 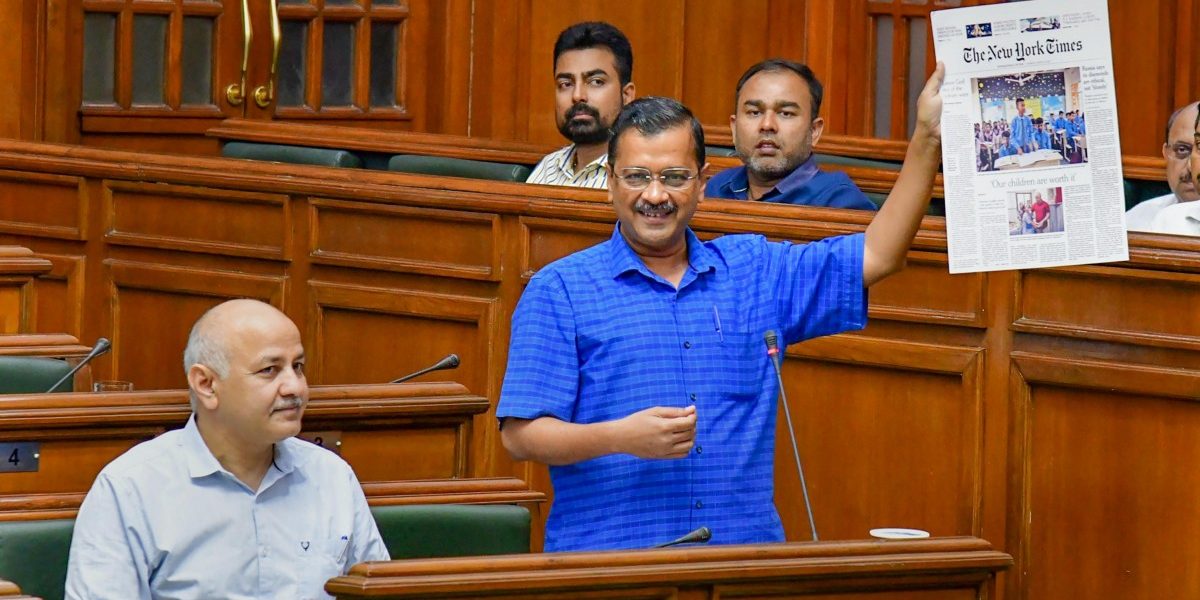 New Delhi: Amid the ongoing political slugfest between Aam Aadmi Party (AAP) and Bharatiya Janata Party (BJP), Delhi chief minister Arvind Kejriwal on Friday, August 26, dubbed the BJP as a “serial killer of governments”, referring to the fall of elected state governments in Maharashtra, Karnataka, among others.

Speaking at a special one-day Assembly session convened by the AAP government to discuss “Operation Lotus” of the BJP, Kejriwal said, “There’s a new serial killer in town. The people select the government, they (BJP) topple them. They are following the same pattern in Delhi.”

Talking of the “pattern” employed by the BJP-led Union government, he said central agencies, like the Central Bureau of Investigation (CBI) and Enforcement Directorate (ED), would be unleashed against legislators of the Opposition parties to threaten them to join hands with the BJP in toppling governments. The agencies “vanished” immediately after a government fell, he added.

Referring to the recent allegations by four AAP MLAs that they had been offered Rs 20 crore to switch to the BJP side, he said, “The rate for Delhi MLAs is Rs 20 crore and in Maharashtra, they announced Rs 50 crore. I don’t know why they have offered less in Delhi…They spent Rs 5,500 cr to buy 277 MLAs, now they have reserved Rs 800cr to buy Delhi MLAs.”

He said his government would face a trust vote to prove its majority in the state Assembly and also to expose the failed attempt of the BJP to lure any of their MLAs. According to NDTV, the AAP government is likely to bring a confidence motion on Monday, August 29. In the 70-member House, AAP has 62 MLAs while the BJP has eight legislators.

Kejriwal also sought to know how BJP had money to “buy” MLAs from other parties. “All the money coming from costly oil, fuel, basic necessities is being used for buying MLAs. All this money from GST (Goods and Services Tax) and inflation is being spent for two things – buying MLAs and writing off loans of billionaire friends of the government,” he alleged.

Meanwhile, Delhi deputy chief minister Manish Sisodia called the first information report (FIR) registered against him by the CBI in connection with the alleged irregularities into the Delhi excise policy “fake and fabricated”. Sisodia has been named as ‘accused no.1’ among the 15 people mentioned in the FIR.

Reiterating Kejriwal’s “serial killer charge” against the BJP, Sisodia said he had never seen a prime minister with such “small thinking” who was out there to “destroy the Delhi government as it is being praised all over the world”.

He also repeated his earlier allegation that he had been promised that cases against him would be closed if he shifted his allegiance to the BJP.

“I received a call from a BJP leader saying join BJP, all the cases filed against you will be closed. They said, if you will not join the party, ED will also register a case against you…I said okay, let them file any case they want, I will get out like earlier because all are fake…they said Manish Bhai, these cases will go for long, if you will join BJP, you will be made CM, bring others also…I want to tell you I am not here to become CM, I am here to change the education system of Delhi,” he said in the state Assembly.

There was pandemonium during the session with BJP and AAP resorting to competitive sloganeering. While AAP leaders shouted “20 khoka (slang for crores, referring to the Rs 20 crore BJP allegedly offered to AAP MLAs to switch sides)” slogans against the BJP, the saffron party MLAs responded with “Dhokha dhokha (cheat)” slogans against AAP.