The Delhi chief minister said the Centre's farm laws are 'death warrants' which would only enrich a few industrialists at the expense of farmers. 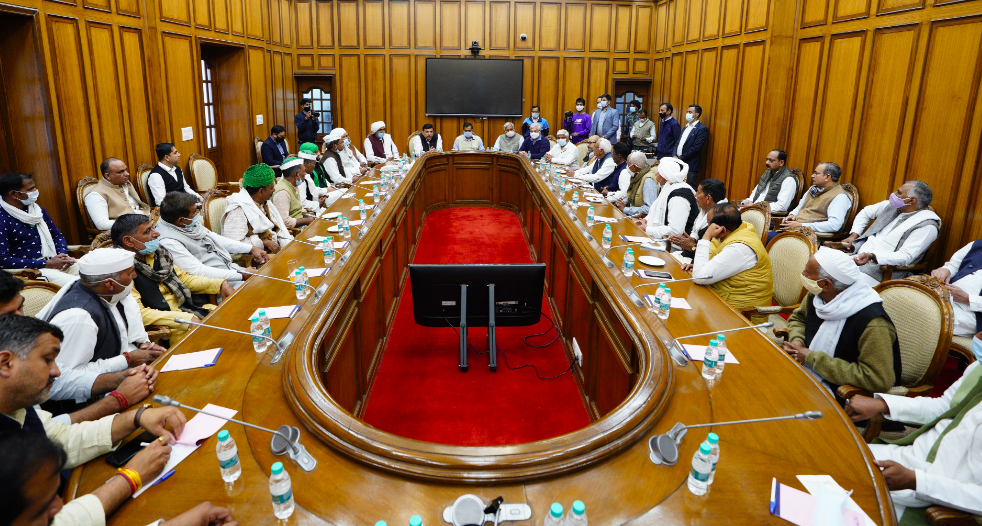 Farmers from Western UP at the Delhi Assembly on February 21, 2021. Photo: Twitter/@ArvindKejriwal

New Delhi: With an eye on the Uttar Pradesh assembly elections due next year, the Aam Aadmi Party government in Delhi invited several farmer leaders to the Delhi Assembly on Sunday, February 21, for a meeting where chief minister Arvind Kejriwal termed the three contentious farm laws “death warrants to the farmers”.

He claimed that “with implementation of these laws, the crop will go to the hands of a few industrialists”.

During the meeting, which was also attended by Delhi Assembly Speaker Ram Niwas Goel, cabinet ministers Kailash Gehlot and Rajendra Pal Gautam, and party’s Rajya Sabha MP Sanjay Singh – who is heading the party’s campaign in Uttar Pradesh – and MLA Dilip Pandey, Kejriwal demanded that the Central government immediately withdraw all the “three black laws” and provide legal guarantee of minimum support price (MSP) to all the 23 crops in light of the Swaminathan Commission’s recommendations.

Kejriwal also urged the Centre to speak to the farmers. “If the government does not listen to the farmers then who will?” he asked.

The national convener of AAP also attacked the Bharatiya Janata Party, which is in power in Uttar Pradesh, of continuously saying that these laws will benefit the farmers but never clarifying as to how they will do so.

Also read: ‘Happened in US 40 Years Ago’: 87 US Farmers’ Unions Speak Out for Indian Farmers’ Protest

Kejriwal said on February 28, a Kisan Mahapanchayat will be organised in Meerut where discussion would take place on the three laws. “At that Mahapanchayat, farmers will demand immediate rollback of these three anti-farmer laws brought by the BJP-ruled Central government,” he added.

During the meeting, farmer leader Chaudhury Rohit Jakhar accused the BJP-ruled Centre of putting up barricades and embedding huge nails in the roads. But, with Kejriwal inviting the farmers of western Uttar Pradesh to the Delhi Assembly, he said, he has broken all barriers of caste, religion and sect and welcomed the “entire Chaudharahat” of the region.

Jakhar said the farmers are demanding the immediate repeal of the three laws, a new law to provide legal guarantee of MSP and implementation of Swaminathan Commission recommendations on MSP. He said the protests would continue till these demands are met. “This battle is for the farmers but this battle will become a battle of every citizen because farmers provide food to all,” he declared.

Another farmer leader, Chaudhary Yashpal Singh, said Kejriwal has assured farmers all support in their agitation.