He said if the Delhi police was under the state government's jurisdiction, it would have opened the Shaheen Bagh roads in two hours.

New Delhi: Delhi chief minister Arvind Kejriwal on Wednesday accused Amit Shah of playing ‘dirty politics’ over the anti-Citizenship (Amendment) Act (CAA) protests in Shaheen Bagh, asking why the Delhi Police has not opened the road where demonstrators have staged a sit-in.

He also told NDTV that if Delhi police was under the state government’s jurisdiction, it would have opened the Shaheen Bagh road in two hours.

#Watch | "If Delhi Police was under our jurisdiction, we would have opened the #ShaheenBagh roads in 2 hours": Delhi CM Arvind Kejriwal to NDTV. #DelhiElections2020 #KejriwalToNDTV #ElectionsWithNDTV pic.twitter.com/RYB2dowABQ

With the BJP repeatedly raising the issue of anti-CAA protests at Shaheen Bagh during its campaign, Kejriwal said, “People also want to ask the Union home minister why is he not getting the road near Shaheen Bagh opened, why is BJP doing dirty politics over it?”

The Delhi chief minister challenged Amit Shah to an open debate on issues affecting the state. The Aam Aadmi Party (AAP) chief said that since both his party and the BJP have released their manifestos, the people of Delhi now want to ask questions of the chief ministerial candidates of the parties.

On Tuesday, Kejriwal took a dig at the BJP, saying it had not yet declared who its chief ministerial candidate is. He said if the party declares its candidate, they could debate on issues affecting the people of Delhi. “I am prepared for a debate, prepared to debate all issues, but BJP has not declared its CM candidate. It is clear from this that BJP does not want to bring a CM face before the people or it does not have one.”

Terming the BJP’s approach “very unfortunate”, he said, “In a democracy, it is the right of the people to decide who will become a CM and who will not. Wherever I am going, I am telling people that every vote of theirs will come to me as they are voting to make me the CM. But if people would vote for BJP it would get wasted as no one knows who would lead them.”

He also urged the BJP leadership to “please at least declare your likely candidates for Delhi CM – let people know if Vijay Goel, Manoj Tiwari, Hardeep Puri or Smriti Irani are in the contention.”

Kejriwal said, “Amit Shah is saying, ‘Vote for me and I will decide who will become the CM.’ So if they would make any person or an illiterate person the CM, then people will lose badly. How can people write such a blank cheque.”

‘If Shah will choose CM, then he should answer questions’

Still, he said, “Since Amit Shah is saying that he would make the CM, I invite him to the debate. He should come and debate with me at the time and place of his choice. The debate should be conducted in an open park with one anchor each from both sides.”

On the BJP seeking to focus its campaign on issues such as dilution of Article 370 and Ram mandir in ayodhya, Kejriwal asked the saffron party what its achievements have been in Delhi. “What have you done for Delhi. Tell us that. We are asking why should people vote for you?” he said.

He added that the people of Delhi want to know why the saffron party is against the provision of free services. 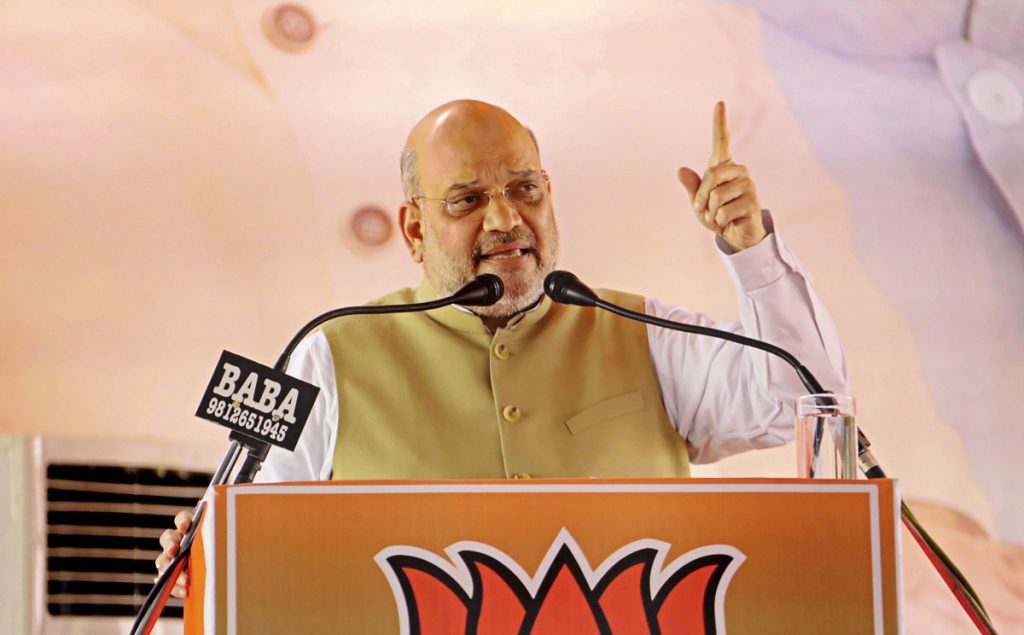 ‘BJP playing with lives of people to capture power’

He claimed that citizens in Delhi and across the country have realised that to capture power, the BJP is “playing with the lives of people”.

He also criticised the BJP leadership for making personal accusations against him. “People also want to know, how this ‘son of Delhi’ is a terrorist. Your leader Prakash Javadekar says he has proof. In that case, place the evidence before the people.”

Finally, the AAP leader said though the BJP has controlled the municipal bodies in Delhi for 15 years, it has no achievements to show for it. “Why have you filled the city with garbage, what have you done with municipal schools and hospitals? How many of them have improved?” he asked.