"This is a government and party of one-and-three-quarter people, with ‘one’ being Amit Shah and three-quarters, Narendra Modi. Arun Jaitley is 'Minister for Blogging'.... The opposition must pledge to put up one candidate against the BJP in every seat." 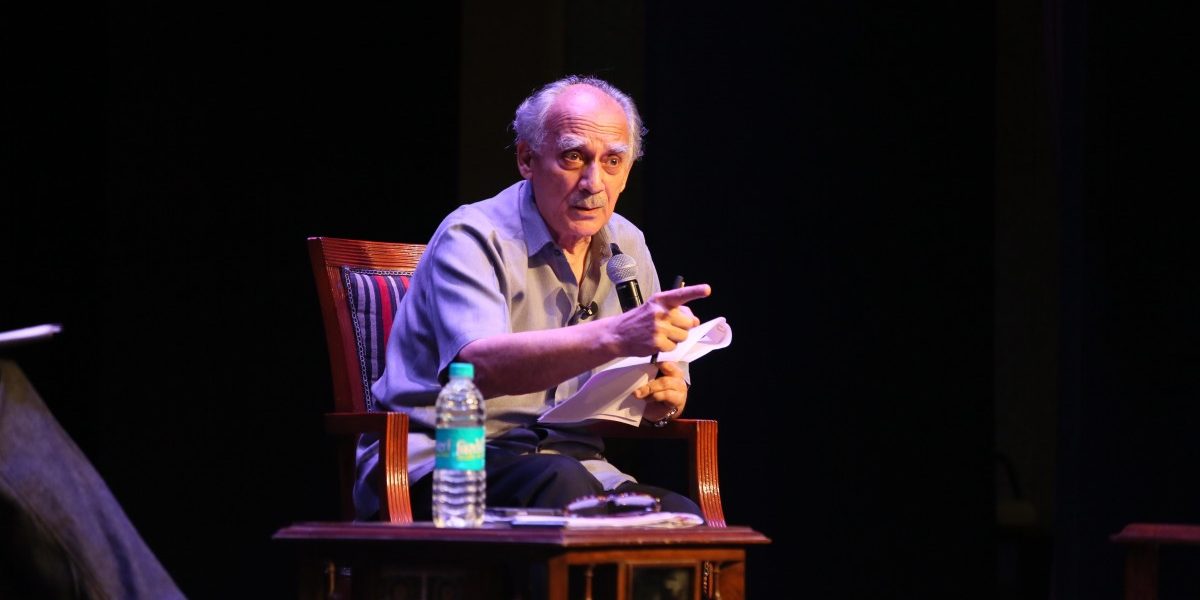 New Delhi: Painting a dire picture of the future of democratic rights and even free and fair elections in the country should Narendra Modi be re-elected prime minister in 2019, former BJP minister Arun Shourie said the opposition parties must pledge to ensure they put up one common candidate against the BJP in every constituency.

Speaking to a packed audience at The Wire Dialogues on Saturday, Shourie, who was interviewed on stage by Karan Thapar, said it was a myth to believe Modi is so popular a leader that the Opposition would be unable to provide an alternative. “So people ask, can it be Rahul Gandhi, can it be Mamata Banerjee but they forget to ask who the alternative to Indira Gandhi was in 1977. Was it Jagjivan Ram? H.N. Bahuguna? Morarji? Charan Singh?” Atal Bihari Vajpayee, who died last month, has been compared by many to Jawaharlal Nehru, said Shourie. “So who was the alternative to Vajpayee in 2004? Was it Sonia Gandhi? Was it Manmohan Singh, who was hidden behind a curtain? Yet the BJP lost that election.” He then quoted the former prime minister Chandrashekhar as saying, “The people have a way of solving problems that leaders are unable to do. And when the people strike, they don’t just slap, they deliver a body blow.”

Asked by Thapar what his advice to the opposition would be, Shourie said the first thing is to leave behind their old arguments and grudges and ensure they field one candidate against the BJP in each seat.

“So forget the past … This is a new situation. Realise it is not just the country that is in peril. You are personally in peril. Each one of these opposition leaders, Modi will finish them the moment he will use them, and this is especially meant for Nitish Kumar and Naveen Patnaik … So forget the past, don’t stand on ceremony. I would say forget the future too – the question of how I can ally with a party today against whom I will have to fight an assembly election tomorrow.”

Shourie warned, “Please understand, that election will never come if you lose this election. This is the last chance for stopping this onslaught. If we lose this chance in 2019 because of such considerations, my friend, don’t expect fair elections after that.”

“The opposition need to remember two numbers, 31-69 and 60-90”, said Shourie: “Thirty-one percent was the vote share Modi polled at the height of his popularity in 2014 and he is today less popular than he was then. So the opposition’s starting number is 69% of the vote.”

The second pair of numbers was a reminder that Modi became prime minister because he won 90% of the seats in states that contribute 60% of the Lok Sabha’s strength. “If the opposition combines in just three states – Uttar Pradesh, Bihar and Maharashtra – it will be impossible for Modi to win 90% of the seats again,” he said. 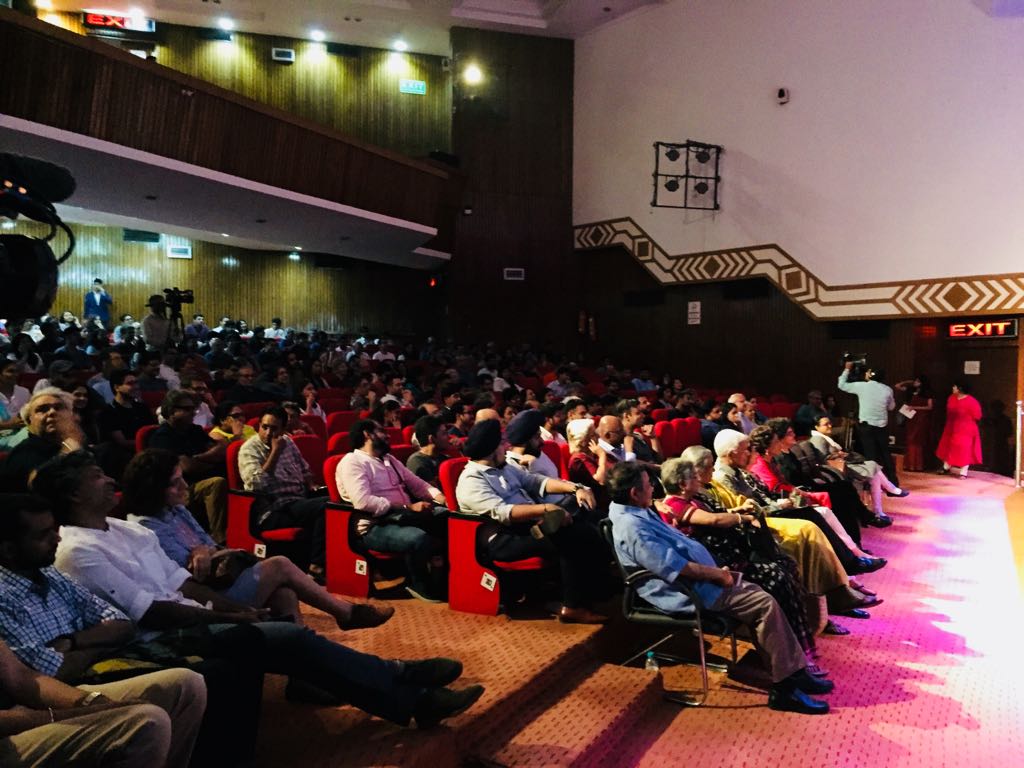 A section of the audience at The Wire Dialogues in Delhi on Saturday. Credit: The Wire

Citing media reports of Aam Aadmi Party leader Arvind Kejriwal saying he did not back the Congress candidate for Rajya Sabha deputy chairman because Congress president Rahul Gandhi did not telephone him, Shourie said the opposition cannot afford to stand on ceremony. “You are saying the country is in danger and then you complain, ‘Oh, he didn’t phone me’.”

To a question from the audience about the popular fear that if Modi were defeated, the same old discredited leaders of the past would come back to power, Shourie quoted an Urdu couplet, “For fear of a storm that might come our way if we set sail, we allowed the boatman to drown us at the shoreline”. A new government might bring new problems and those would also be confronted. He added that one can look forward to a “new leadership” that is fast emerging in India. “Jignesh Mevani, Kanhaiya Kumar, Alpesh Thakor, Hardik Patel. They have provided a new leadership.”

When Thapar asked him about the perception that the Modi government has remained relatively scam-free, Shourie spoke at length about both the Rafale deal, which he thought the government was trying to whitewash now, and the failure of the media to investigate allegations of wrongdoing. “In any case, please remember corruption is not merely an (illegal) exchange of money. There are other forms of corruption,” he said – the corruption of of justice, of ideology, of history, of society. 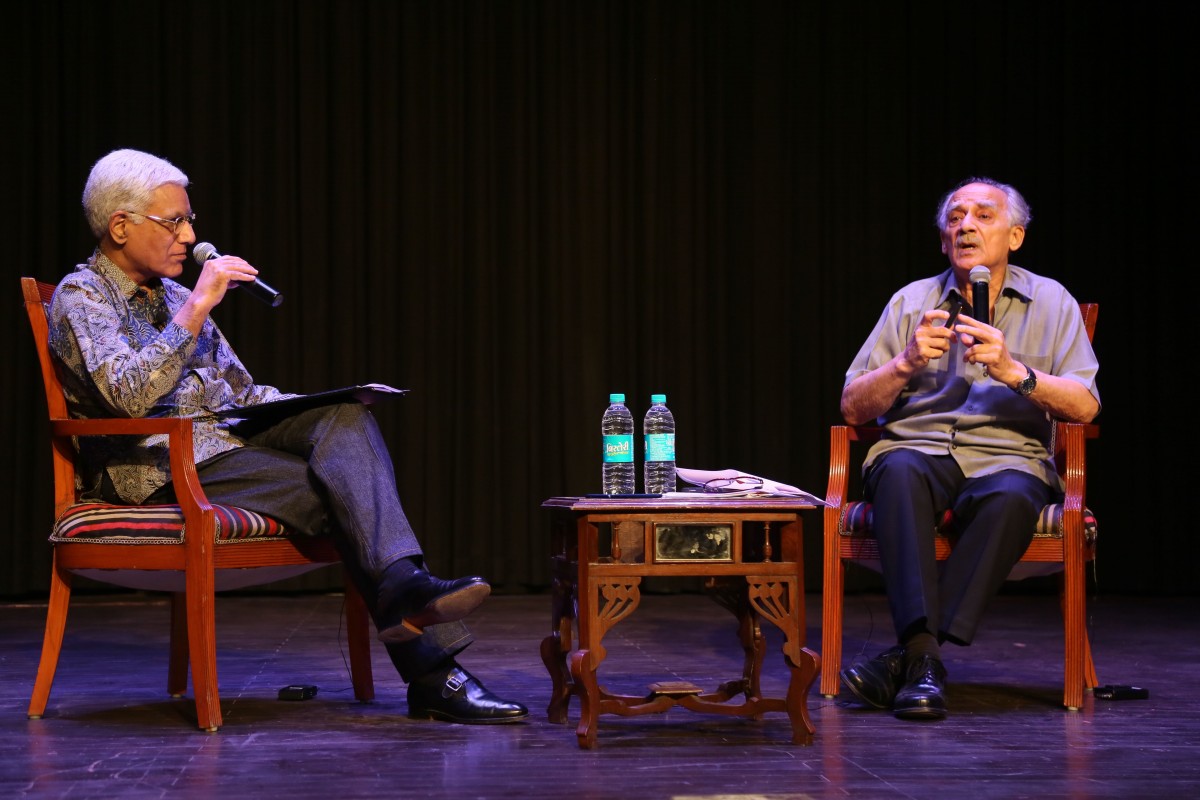 Karan Thapar in conversation with Arun Shourie at The Wire Dialogue in Delhi on Saturday. Credit: Moniza Hafizee/The Wire

In response to a question from Thapar about the roles of Sonia Gandhi and Amit Shah as party presidents in their respective party-led governments, Shourie said that Shah has assumed greater decision-making powers than Modi’s cabinet ministers. “Even a small person like me could challenge a big leader like L.K. Advani in Atal ji’s (Atal Bihari Vajpayee) government. Atal ji would encourage (free-flowing) discussions. You cannot do that anymore,” Shourie said indicating that both the government and the saffron party had become heavily centralised in the hands of only the Modi-Shah duo.

“There is no party anymore,” he said about BJP and added that members are scared to speak freely in front of Shah and Modi.

“This is both a government and party of one and three-quarters men, and the ‘one’ is Amit Shah and not Modi,” Shourie said. Modi busied himself making speeches and in event and image management while it was Shah who was wielding the coercive power of the state by directing the functioning of various agencies.

As for Arun Jaitley, he said the finance minister had been reduced to Modi and Shah’s “minister for blogging”.

In trying to elaborate how most government institutions have been subverted under the Modi regime, Shourie cited the example of how the police in Uttar Pradesh has been faking encounters, and how dissenters have been arrested. “Fifty-four witnesses have gone back on their testimonies in the Sohrabuddin fake encounter case. Is this not corruption?” he asked while alleging that the Modi-Shah duo has sabotaged the processes of law. He also denounced as a “fabrication” the documents the police claim to have recovered from the activists arrested in connection with the Bhima-Koregaon incident and a purported plot to assassinate Modi.

Shourie said the Modi-Shah duo will be looking to deflect people’s attention from real issues in the run-up to 2019 elections. “The recent arrests of five activists”, he thought, was a case in point. “This is the Gujarat model”, he said while alleging that from 2002-2014, the Gujarat police too claimed multiple times that Modi could be assassinated. He said such a tactic was advanced by the duo with elections in mind.”

Apart from this, he said, the only other card they have is to promote Hindu-Muslim divisions.