Army Version Under the Scanner in Killing of Four Civilians in Shopian, Kashmir

The first announcement spoke only of one militant killed. In a second statement, the civilian deaths were acknowledged but the victims were described as 'overground workers' of the militancy. Gowhar Ahmad Lone and the WagonR his body was found in.

Shopian: The unbloodied seats of the WagonR car in which his son Gowhar Ahmad was found shot dead, raise many questions in the mind of Abdul Rashid Lone, an apple grower.

Gowhar’s body was spotted inside his vehicle by villagers on early Monday morning, less than 300 meters from the shootout site at Pahnoo village in Shopian district where the J&K police late on Sunday evening said they recovered the bodies of three other young civilians – Suhail Khaleel Wagay, Shahnawaz Ahmad and Mohammad Shahid Khan.

Their deaths capped a bloody weekend in the district that saw two militants and four civilians killed by the security forces.

“His (Gowhar’s) body was inside the vehicle but there were no blood marks on the seats or anywhere,” said Lone at his two-storey house in Moul, a village nestled among apple orchards. “He had a bullet injury in his back but there was no bullet mark on the seat on which he was found dead. Neither was there a single drop of blood on the seat. I believe he was killed outside his car or the forces took him to their camp and killed him there and later dumped his body in the car,” he alleged.

Twenty-four-year old Gowhar had started a fertiliser business in Shopian last year after completing his masters in physical education from Nagpur. On Sunday morning, he left for the town to meet some people in connection with his business.

According to the elder Lone, Gowhar made his last call home at around 6:30 pm to say he would be returning in an hour. “When he didn’t return, we called his mobile but it had been switched off,” he said.

Gowhar’s car now stands parked on the lawn of a neighbour’s house. It has bullet marks on its sides. Another bullet has made a hole in the front windshield.

“Had he (Gowhar) been hit by a bullet inside, wouldn’t there have been blood all around? He was killed in cold blood and then they tried to show that he got killed in cross firing,” said a a villager outside the Lone house.

Around 10 kilometres from Moul, two spots on a road in Pahnoo village have been carefully circled by the villagers, with straw and pebbles. The blood stains still look fresh.

“A militant (Amir Ahmad Malik) was killed there,” a man in his late 30s pointed towards a spot on the steep road. More than 150 meters ahead, he stopped at the edge of the road. “And this is where the three youths were gunned down,” he said.

Less than two kilometres from the spot is Pinjoora village where the Wagay family lives. They are of apple growers. Inside his house, made of stone and brick, mourners sat around Khaleel Wagay, father of 19-year old Suhail, in complete silence. In the nearby mosque, tapes run on loudspeakers bemoaning the “martyrdom of innocents”. “My son was a blossoming flower, too young to die,” said Wagay. 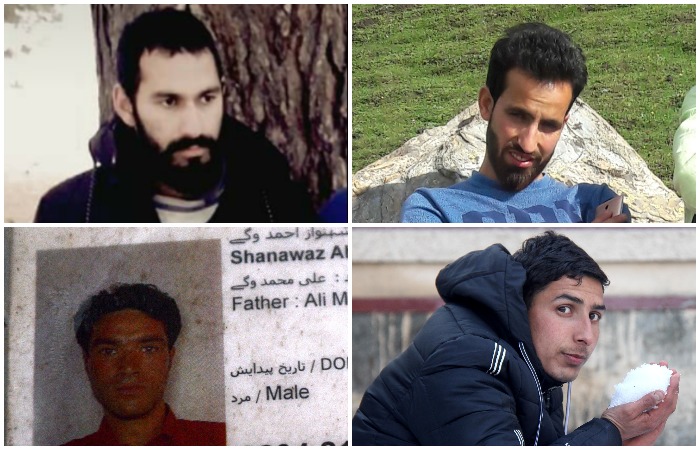 A class 11 student, Suhail had left home to pick up his mother from her sister’s home in the neighbouring village of Pahalipora.

According to his uncle, Suhail called home at around 7:22 pm, saying he would pick his mother up in the next 10 minutes. Shahnawaz (24), who worked in their apple orchards, was travelling with him in his Swift car.

A resident of nearby Trenz, Shahnawaz had dropped out from school in class X to work as a labourer and support his family.

Barely a kilometre from Shahnawaz’s house is Malikgund, the native village of Mohammad Shahid Khan, the youngest of the four killed civilians. A class 12 student, Khan would have turned 18 on Monday.

He left home around 4:30 pm, telling his sister that he was going to play cricket. Earlier in the day, he had gone to Shopian town and submitted some documents to a private company for a job, said his father Bashir Ahmad Khan.

Between army and chief minister, a version and counter-version

Soon after the shoot-out, the army said a joint mobile vehicle check post near Pahnoo had been fired upon by militants at 8 pm. “In a retaliatory operation, one terrorist was neutralised,” defence spokesman Col Rajesh Kalia had said.

There was no mention of any civilian deaths in the statement.

But when news spread about the killing of three civilians, the army issued a second statement terming the three youth killeds as over-ground workers of the militants.

On Monday, chief minister Mehbooba Mufti rejected the Army’s assertion that the four civilian killed were over-ground workers of militant groups, saying they were “civilians caught in the crossfire”.

“Deeply distressed by more deaths of civilians caught in the crossfire in Shopian. My heartfelt condolences to the deceased’s families,” Mehbooba tweeted.

In the afternoon, two senior army officials, 12-sector commander Brigadier Harbeer Singh and Colonel D.S. Negi of 44-Rashtriya Riffles, addressed a press conference. However, this time the army said the four youths killed were civilians but that an investigation would “ascertain their level of cooperation with the militants”.

“We will investigate if the killed youth had any affiliation with militant outfits,” said director general of police S.P. Vaid, while making an appeal to people “to maintain calm”.

A statement later issued by the police said the death of Gowhar and Ashiq Hussain Bhat (another militant) “is part of same chain of events that took place yesterday at Pahnoo”. Bhat’s body was found from an orchard in a village in Shopian and according to the police he had fled from the shoot-out spot after being hit by bullets.

These fresh civilian killings in Shopian have sparked protests across different districts of Kashmir, forcing the government to close down educational institutions for three days.

Hurriyat leaders including Syed Ali Geelani, Mirwaiz Umar Farooq and Yasin Malik called for a protest march towards Shopian on March 7. “The trigger-happy forces are deployed to kill Kashmiris and the pro-India politicians are here to provide a legal cover to the killers,” said the separatists said in a joint statement.

On the other hand, National Conference working president Omar Abdullah, while demanding a probe into the civilian killings, said, “The Shopian incident is yet another stark reminder of the grave and rapidly deteriorating situation in the Valley and the varying accounts from the CM and the security forces are unfortunate. It further perpetuates the sense of disenchantment and alienation.”

The MLA for the ruling PDP from Shopian, M.Y. Bhat too demanded a “judicial probe”, saying “no circumstances can justify these civilian killings which have tendency to further vitiate the atmosphere”.

Suhail’s father, Wagay, dismissed the calls for a probe. “We won’t seek registration of an FIR or demand a probe. This is all a farce. God will see us through this tragedy,” said Suhail’s uncle, Manzoor Ahmad.

A few minutes later, he said: “Didn’t you see how they have buried their own investigation into the killing of three other civilians from Gawanpora.”

He was referring to the killing of four youths in army firing in Gawanpora village of Shopian on January 27. The J&K government had ordered a probe into the killing and identified one Major Aditya of the army as commanding officer in the FIR it registered into the killings.

On Monday, the state government told the Supreme Court that the Army major had not been named in the FIR while the apex court stayed further investigation into the case till April 24.

“They first kill our son and then trap us in these never ending probes and investigations. It’s better to come out of this cycle of seeking justice that never happens. Our son was innocent but today we will say it proudly that his death will serve … [the Kashmiris’] fight against injustice,” Wagay said, as he struggled to control his tears.