Are Southern Political Forces Coming Together Like They Did in 1989? 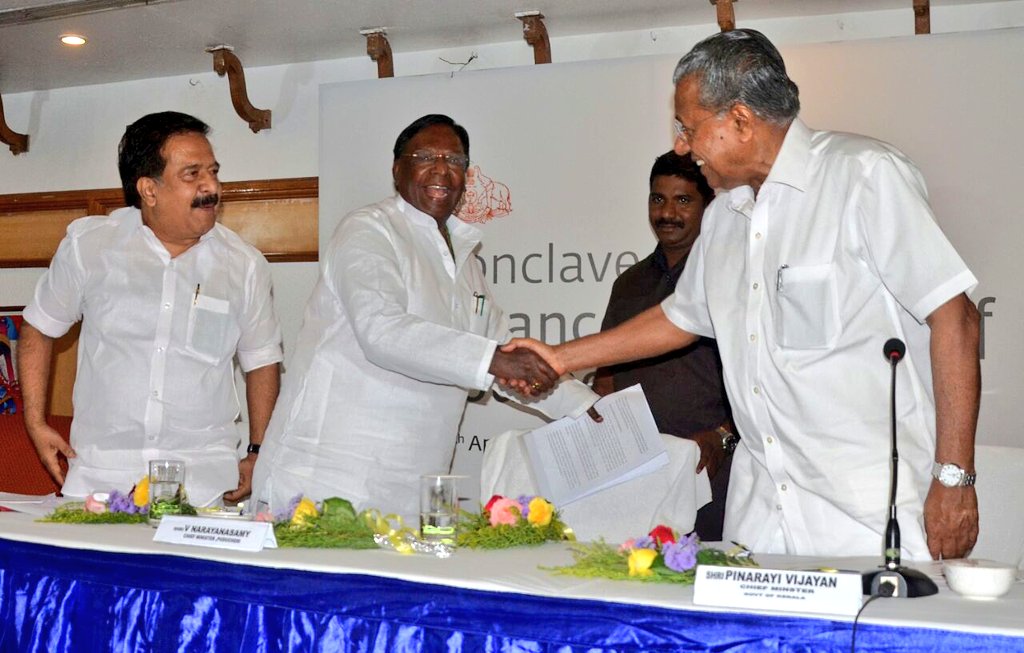 The past few weeks have witnessed a series of efforts, involving leaders from an eclectic array of parties, to gather forces against the Bharatiya Janata Party (BJP) ahead of the general elections expected to be held in May 2019. These include publicised confabulations by Trinamool Congress chief Mamata Banerjee with Telangana chief minister K.C. Rao in Kolkata, and her subsequent meetings in New Delhi. Akhilesh Yadav and Mayawati, on the other hand, wrested two Lok Sabha seats in Uttar Pradesh from the BJP in the by-elections to Gorakhpur and Phulpur.

Yet another such move, which indeed could assume great significance in the days ahead, was the conclave of finance ministers from the southern states hosted by T.M. Thomas Isaac and graced by Kerala chief minister and CPI(M) politburo member Pinarayi Vijayan. The conclave was not an attempt – if the statements from there are to be taken seriously (and one would be naïve to do that) – towards an alignment of anti-BJP forces. However, a decision was made there to have another such meet to formulate a critique of the terms of reference (ToR) for the Fifteenth Finance Commission at Visakhapatnam in N. Chandrababu Naidu’s Andhra Pradesh within a fortnight.

The meeting, we are informed, has also resolved to rope in finance ministers from Odisha, West Bengal and Delhi. The message is clear. The sticking point in the ToR – to hold the 2011 Census figures as the base for determining allocations (as against the 1971 census) – will place the states from southern India at a disadvantage because they have performed well on the population control front, cannot hold good if West Bengal and Odisha are drawn into the fold. And here is the hint that the idea has got more to do with political alignment.

There are similarities here with a sequence of events of this nature in the early 1980s. Although the Congress under Indira Gandhi had swept the opposition aside in January 1980, the tide began to change by January 1983. The Congress lost power to the Telugu Desam Party in Andhra Pradesh and to the Janata Party in Karnataka that year. And soon, Ramakrishna Hegde, the then chief minister of Karnataka, organised a conclave of southern chief ministers on March 20, 1983. K. Karunakaran, the then Congress chief minister of Kerala, was the lone absentee. Even while Hegde insisted that the meet was merely to raise issues involving fiscal federalism, the truth was otherwise.

On May 28, 1983, only a couple of months after the Bangalore conclave, leaders of 14 parties – then opposed to the Congress – assembled at Vijayawada. While N.T. Rama Rao was the organiser, the participants included Farooq Abdullah, the chief minister of Jammu and Kashmir; Jagjivan Ram, who had by this time walked out of the Janata Party to set up the Congress (J); H.N. Bahuguna, who left the Congress (I) once again to set up his own outfit called the Dalit Mazdoor Kisan Party; L.K. Advani, then the general secretary of the BJP; Maneka Gandhi, who was heading her Sanjay Vichar Manch; S.S. Barnala of Akali Dal; Sharad Pawar of Congress (S); and M. Basavapunnaiah of CPI(M). The leaders resolved to work towards establishing a political brotherhood that was necessary to fight against the undemocratic Congress (I).

It is necessary to stress here that these developments in early 1983 were guided by the rupture that marked the political discourse in 1967 and subsequently in 1977, and substantially belonged to the political strategy that Ram Manohar Lohia sought to mould – anti-Congressism. It will, however, be an error to see the developments in 1983 as another stage of that process in a linear fashion. Instead, 1983 represented a rupture with the past; the faces that dominated the conclave and the meets since then were leaders of regional parties with established ‘national’ leaders merely being there to hold hands on the stage.

Indeed, the TDP, whose presence was restricted to Andhra Pradesh (the state was yet to be bifurcated) emerged the largest opposition block in the Lok Sabha post 1984 general elections (with 30 MPs) and its leader, Rama Rao, emerged the chairman of the National Front in 1989.

Recall that the Janata Dal, to which V.P. Singh belonged, happened to be a constituent of the National Front as much as the DMK, the AGP and some other parties were. The point made here is that a new approach to the nation and national began to show in 1983 when the many ‘regional’ forces gathered to make the ‘national’. And this matured further in May 1996 to make the United Front.

This churning that began in 1983 and gathered shape through conclaves and meets in state capitals (rather than in the drawing rooms in Lutyens’ Delhi) also ensured that state governments led by ‘regional’ parties were not pushed around by the command headquarters located in Delhi. It is not just incidental that Delhi’s response to the March 1983 conclave of southern chief ministers (even while the Congress party’s K. Karunakaran did not attend) was to set up the Justice Sarkaria Commission to delve into federalism. The report, to this day, is indeed a treatise of Centre-state relationship and worthy of consideration. At another level, a constitution bench of the Supreme Court, in 1994, restricted the scope for abuse of Article 356 of the constitution enormously and restored the idea of federalism in the Bommai case.

The developments involving a cross section of the ‘regional’ parties and the ‘national’ perspective ahead of the 2019 general elections, indeed, belong to this trajectory. It is also worthy of recalling another important feature of this trajectory since 1983. In 1989, the National Front government depended on the BJP for support for survival; and the United Front survived on support from the Congress. In the end, the two ‘national’ parties – the BJP and the Congress – resigned to the reality to form coalitions with these ‘regional’ parties between 1998 and 2014. The landslide for the BJP in 2014, perhaps, was akin to the Congress party’s historic win in 1984 (415 seats in the Lok Sabha). And some even held that the era of ‘instability’ was over.

It now appears that there are many parallels between the 1980s and now. And the run up to 2019 could well have many things in common with 1989; albeit with a difference – while the ‘other’ in 1989 was the Congress, it is Narendra Modi’s BJP in 2019. It remains to see whether Amit Mitra, Shashi Bhusan Behera and Manish Sisodia go to Visakhapatnam when the conclave is held.

More importantly, even while the CPI(M) seems determined to reject any idea of forging a front inclusive of the Congress (at its Hyderabad congress beginning April 18) and the support to such anti-Congressism coming predominantly from its Kerala state unit, it was indeed an act of subversion, so to say, with party’s finance minister hosting a conclave and rubbing shoulders with Byre Gowda and V. Narayanaswami (both of the Congress) and even resolving that his counterpart from West Bengal should be approached to join a similar meet at Visakhapatnam. Well, none had expected Chandrababu Naidu to join this group a few months ago. Let’s return to the history of our own times and March 1983, indeed, could be a point from where we could start for now.