Several participants on social media sought to point out that such an incitement by a Union minister should amount to a charge of sedition. 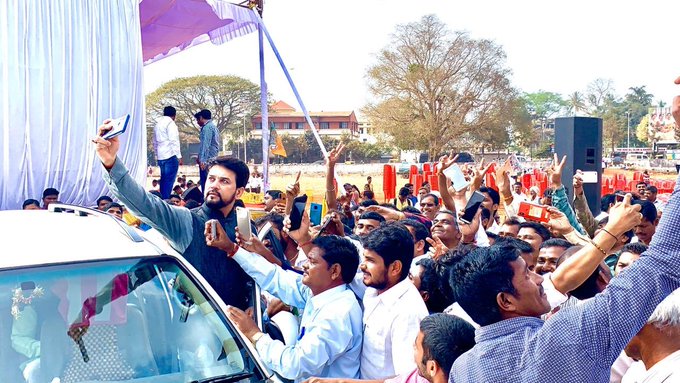 New Delhi: A video showing Anurag Thakur leading a crowd of BJP supporters into chants of ‘Desh ke gaddaron ko, goli maro salon ko’ has gone viral on social media, adding the Union Minister of State for finance’s name to the list of the party’s leaders who have been caught on video using the slogan in the aftermath of the resistance to the Citizenship Amendment Act.

The video was reportedly shot during a Delhi election rally, which was also attended by former BJP president and Union home minister Amit Shah.

The words on a large poster on the dais on which Thakur is seen standing, show that it is a meeting at the Rihala constituency.

Shocking: It was a local BJP leader from Delhi back then, its now a front line BJP leader and MoS Finance, Anurag Thakur who is leading the crowd to chant “Desh ke gaddaron ko, Goli maro salon ko”.

Such is the level of politics, ladies and gentlemen! pic.twitter.com/rXZ8M8m6lz

Translated, the slogan which has been used widely by supporters of the CAA against protesters, means, “Those who have been traitors to the nation, shoot them dead.”

Several participants on social media sought to point out that such an incitement by a Union minister should amount to a charge of sedition.

Kapil Mishra, a BJP candidate from Model Town, had been caught on video chanting the same slogan with a crowd that had assembled for a pro-CAA ‘protest’ in New Delhi.

Indian Express, in its roundup of situations where this slogan has been heard, notes a Nagpur rally attended by Union minister Nitin Gadkari and also by perpetrators of the the January 5 violence at Jawaharlal Nehru University.