First We Kill Our Love, Then We Target Someone Else's Love...

Who are the people setting terms and conditions regarding who shall love whom and how is it affecting society; who is being pumped up with hatred and who is planning a kill? 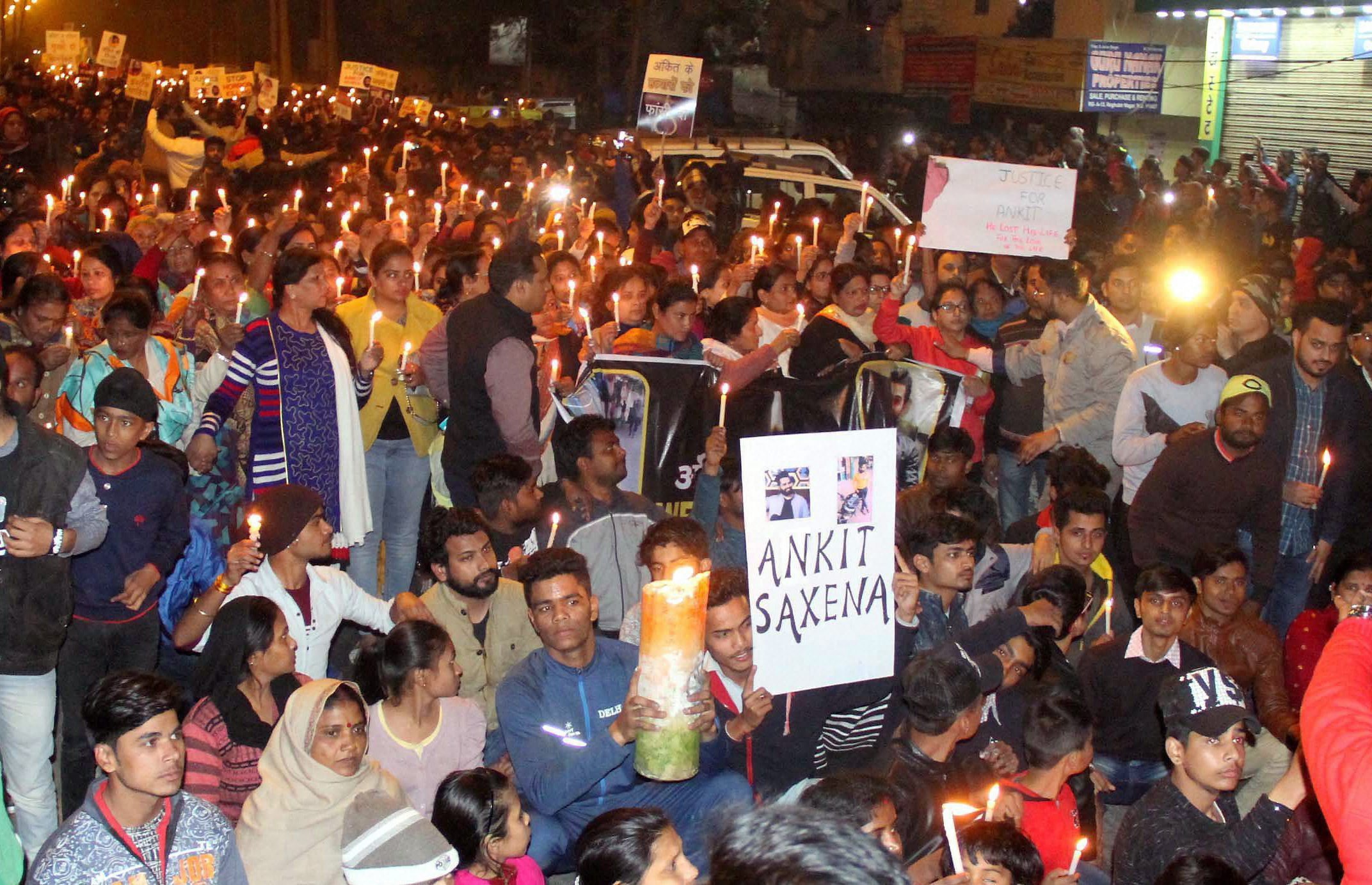 In a society that makes much of lurking in the bushes to catch lovers kissing, Ankit Saxena’s death is certainly not the last.

I silently look at photographs of him in happier times. A life that had had so many hues to it has been extinguished. What must be the depth of despondency in a country where those who love are cut down by swords and knives?

It is quite telling that those who are waiting for someone to write on this incident in an atmosphere of all-pervading despair are the ones who are already consumed with bloodlust. They are determined to clock every writing effort of yours, now or later, and raise an alarm. In a society of vultures, the act of writing increasingly feels like answering a roll-call.

How one wishes one could have seen Ankit’s love blossom. Even before he died, the lovers knew they were exchanging vows of love in the shadow of death. Why, Ankit’s beloved had made up her mind to run away forever, even locked up her own parents in their house – is it not possible to love without rebelling in India? Even today young women find themselves having to flee their homes to be true to their love. They are chased down by parents brandishing sharpened swords of caste and religion.

What must be going through the mind of Ankit’s beloved, whose desire to be with him made her leave home with a resolve never to return? There she was running towards the metro rail station, which resonates with the sound of modern India’s approaching footsteps. On the other end were heartrending images of Ankit’s mother screaming out her grief. On both ends it is daughters who are suffering. The son, both lover and beloved, has been put to death.

Ankit was also rushing in the direction of the metro rail station where she was waiting for him. How one wishes he had reached the appointed spot that day. They would have boarded a bus together and disappeared from a world soaked in hatred, sloughing off every marker of their existing identities. But his wretched car, it had to go and collide with her mother’s scooty, of all things. The newspaper reports said her mother collided with him on purpose – Ankit was surrounded. He was fatally stabbed in the neck.

Also read: Ankit Saxena’s Murder is a Time for Collective Introspection, Not Hate-Mongering

Ankit Saxena was a Hindu. His love is a Muslim and to make things very clear, her mother, brother, father and uncle are all Muslims too. I have no qualms mentioning someone’s religious affiliation. Even if I were to refrain from mentioning this fact, it would make no difference to a society of trolls addicted to fomenting hatred – it will see what it chooses to see, namely a Hindu and a Muslim.

What would have happened had the story been inverted – if she had been a Hindu, he had been a Muslim and parents on both sides had been willing? Those very groups that are now trying to make political capital out of Ankit’s death would have been creating a disturbance outside their doors, no question. The way the trolls are going on and on at present, it is as if they would have led the wedding procession of the star-crossed lovers. Ask yourselves, who are the people spreading venom against such inter-faith marriages?

This brings to mind the immense courage demonstrated by the father of a Hindu girl in Ghaziabad recently when those who were complete strangers to the girl and the boy came determined to cause a commotion on the day of their marriage. Undeterred, the girl’s father made sure the marriage went off without hitch and in that very city. What happened was that the district head of a certain political party gathered a crowd outside the girl’s house to disrupt the wedding proceedings. Not only did he not succeed, his party stripped him of his position as well.

Who are the people setting terms and conditions regarding who shall love whom and how is it affecting society; who is being pumped up with hatred and who is planning a kill – these are questions whose answers you can figure out for yourself. Even if you can’t figure it out, it doesn’t matter, for it is not that simple an issue. Within you also there are layers of violence that you almost descend to before stopping yourself.

The prevailing atmosphere has enfeebled everybody. There are very few who are able to defy their weakness as the father of the girl in Ghaziabad did. Some, like the Muslim parents from Khayala, give up and become killers. How one wishes that the parents and brother of Ankit’s beloved had not treated their daughter and sister as their and their religion’s preserve. We have raised so many walls of hatred around ourselves, built so many layers of ill-will deep within ourselves that it is a constant struggle to overcome them. One could win the battle – or lose and become killers.

Think about the couple from Coimbatore, Kausalya and Sankar. Both were Hindus after all. Then why was Sankar hacked with the sharp edge of a weapon in broad daylight? Why did Kausalya’s parents hatch a conspiracy to kill her love? He was a Dalit and she was from an ‘upper caste’. They fell in love, got married. It was when they were returning home from the market that goondas hired by Kausalya’s parents put an end to Sankar’s life. This happened in 2016. The video of the incident is terrifying.

From day one, Kausalya maintained that her parents were responsible for Sankar’s murder. The investigation took one year and the case resulted in a conviction. This must be one of the few cases of honour killing to be wrapped up so soon. It would be instructive to read the details of the case, available online, for there is a great deal to learn from it. May god give Ankit’s beloved the courage to do what Kausalya did. She has certainly given a statement that her parents killed Ankit.

Also read: ‘Love Will Triumph When Honour Killings Are Prevented. Caste Will Be Annihilated When Love Triumphs’

Add the tag of ‘Hindu’ or ‘Muslim’ to every name as many times as you want, but it will not suffice to explain away the reality of the violence entrenched in our society. Just the other day, those wanting to reap the bitter harvest of communalism were collecting donations for Shambhulal Regar, the man who hacked and burnt Afrazul. These are people who want a constant supply of firewood to keep society perpetually flared up.

Honour killing is a cocktail made of hate speech to which the colour red is contributed by religion, caste, father or brother as the occasion may demand. It is not just the act of falling in love that invites honour killing. When daughters are foetuses in their mothers’ wombs, they are killed in the name of honour. Towards which religion and its community is this reality pointing? Towards which country and its society is this home truth pointing? Which country has the rousing slogan ‘Beti bachao, beti padhao (Save the daughter, educate the daughter)’? Against whom do we need to protect our daughters? Every daughter has so many killers facing her – first and foremost her own mother and father.

We are perpetually intimidated by religion and caste. In a customary moment of love we may sing a note or two about taking wing like birds, but the truth is we continue to be trapped in the cage of religion and caste. The way things are in India, couples invariably find less of love and more of hatred in the course of their love. That they still dare to love is worthy of our salutations.

It is to be expected that a society with a veritable arsenal of ready reasons for thwarting love feels no grief over the killing of Ankit; if anything it is on the lookout for any benefit that can be reaped by the incident. In this context, the statement of Ankit’s father that he did not want any tension in the area following his son’s death was a big thing.

However, the tension has not reduced. No one seems to have quietened down. Anti-Romeo ‘squads’ that are against ‘love jihad‘ roam around, holding our daughters captive. Every killing whets the appetite for more killings. Those who are killers themselves are trolling you to ask when you plan to write about this – Ankit’s – killing.

My reply is as follows: look within yourself and think about what you are doing. Aren’t you among those who get couples attacked in parks and thrashed within an inch of their lives? Your aim is to kill love, isn’t it? You go hunting in parks to perform acts of honour killing, don’t you? Those who lurk in the bushes to catch couples in the act of kissing are spreading everywhere like stinging nettles.

By adding the prefix of maulana or mullah to my name, what do you think you are doing? You are mirroring that against which you want something to be written. Your politics of hate, and the very idea of snuffing out the love that exists in every home, is proving to be fatal. The frenzy is rising.

Why don’t you let the country breathe a little free, give flight to its youthful dreams? Youngsters who do not know what it is to be in love and marry the person of their choice remain cowards forever, timid for life. Living in a society of crores of unsuccessful and timid lovers, we have become killers. First we extinguish any possibility of love that we may have – we kill our love. Then we target someone else’s love…

Ravish Kumar is an anchor with NDTV India. This article was originally published in his blog Kasbah.