A controversy has erupted around Viradulli Nageswara Rao, as the ruling YSR Congress government tries to 'prove' that farmers in the state are receiving benefits under various welfare schemes.

Amaravati: A charitable act by Sonu Sood has sparked a political row around the condition of farmers in Andhra Pradesh.

The actor is no stranger to Telugu audience, having made his mark in Tollywood (he received a state award for ‘Best Villain’ in the blockbuster flick Arundhati). The Mumbai-based actor has been in the news ever since the COVID-19 lockdown was imposed, as he helped thousands of stranded migrant workers reach their homes by arranging chartered flights, special trains and buses.

In his latest act of charity, Sood sent a brand new tractor to a farmer family based in the drought-prone Chittoor district of Andhra Pradesh.

A video of two minor girls pulling a plough to sow groundnut in the fields of Mahal Rajupalli village of Chittoor district went viral on social media on Sunday. The video showed Dalit farmer Viradulli Nageswara Rao ploughing his one acre of land with the help of his two daughters—Vennela and Chandana— while his wife sows the seeds in the furrows.

The issue was brought to Sood’s attention after he was tagged in a video on Twitter.

Terrible! Tomato farmer in Madanapalle, #Chittoor dt, forced to use his daughters for ploughing as he doesn’t have money to rent bulls. He suffered huge losses last time due to #coronavirus pandemic. With no cash in hand, he begins Kharif season on a sombre note. #AndhraPradesh pic.twitter.com/p4Tqz0eD9I

Moved by the plight of the farmer, Sood, a day after the video was posted, promised to send a pair of oxen to the family of the farmer but later changed his mind. Sharing the video, Sood said, “The family doesn’t deserve a pair of ox. They deserve a tractor. So sending you one. By evening, a tractor will be ploughing your fields. Stay blessed”.

Telugu Desam Party leader N. Chandrababu Naidu, who is also leader of the opposition, late on Sunday tagged Sood in a tweet and said, “Spoke with @SonuSood ji & applauded him for his inspiring effort to send a tractor to Nageswara Rao’s family in Chittoor District. Moved by the plight of the family, I have decided to take care of the education of the two daughters and help them pursue their dreams.”

Spoke with @SonuSood ji & applauded him for his inspiring effort to send a tractor to Nageswara Rao’s family in Chittoor District. Moved by the plight of the family, I have decided to take care of the education of the two daughters and help them pursue their dreams pic.twitter.com/g2z7Ot9dl3

Sonu, in his reply, responded saying, “Thank you so much sir for all the encouraging words. Your kindness will inspire everyone to come forward and help the needy. Under your guidance millions will find a way to achieve their dreams. Keep inspiring sir. I look forward meeting you soon”.

The lull that existed until Naidu’s tweet gave way to a political storm, with the ruling YSR Congress swinging into action to ‘prove’ that the family had received several benefits from government welfare schemes. Even as the brand new Sonalika tractor, with an estimated value of Rs 8.5 lakh, rolled straight up to the doorstep of Nageswara Rao, KV Palli mandal parishad development officer (MPDO) Mohan Raju visited the village on a fact-finding mission, as instructed by district collector N. Bharath Gupta.

Later, the officer told reporters, “The media reports that the family is impoverished and could not afford to engage oxen or tractor to plough the field is absolutely false. The family voluntarily did it. I was informed that the family wanted to have the experience (of pulling the plough) as a sweet memory. The family have confessed that they never expected the issue would take such a turn”.

Chintala Ramachandra Reddy, the YSR Congress MLA representing the Piler assembly segment under which Nageswara Rao’s village falls, also took to Twitter, endorsing the MPDO’s version. The tweet listed out a slew of financial benefits the family has received under government schemes.

The government’s feverish reaction is apparently intended to present a rosy picture of the situation of farmers under the chief ministership of Y.S. Jagan Mohan Reddy. The swift reaction also shows that the government is eager to prevent Naidu, who was the CM before Jagan, from capitalising on any reports of farmer distress.

But Nageswara Rao told The Wire that he is a small farmer, owning 1.85 acres of land. “I did not even cheat the government by making wrong claims…. and the benefit (tractor) which I got did not come from the government. I don’t understand why this controversy is getting flared up around me,” he lamented.

He said that the COVID-19 pandemic delivered a deadly blow to his smalltime business in Madanapalli, which is 40km away from his village. “I used to make a living by earning Rs 400 a day by running a tea stall. When the lockdown was imposed, I was forced to wind up my business and return to my village to get back to cultivation,” he said. He tried to rent a tractor to sow groundnut in one acre of his land, but could not afford the Rs 2,000 demanded by the owner. Therefore, he decided to till the land manually by engaging his daughters, Nageswara Rao said.

“We did not shoot the video intentionally to draw the attention of philanthropists. Sonu Sood’s donation was just coincidental,” Nageswara Rao explained.

Nageswara Rao said that usually, oxen were used for tilling farmlands and drawing carts to transport farm produces. But they have not had one for nearly three decades. The price of a pair of oxen ranges between Rs 1.5-Rs 2.5 lakh, said Nageswara Rao, adding that it is out of reach for small farmers like him who hardly own 2 acres of land.

Bojja Dasaradharami Reddy, the secretary general of the Consortium of Indian Farmers Association (CIFA), explained the reason for the decreasing number of cattle in the Rayalaseema region. He said the region faces recurring drought conditions every season, which leads to an acute shortage of fodder. This has seen the near extinction of agriculture-enabled cattle in Rayalaseema, he said. 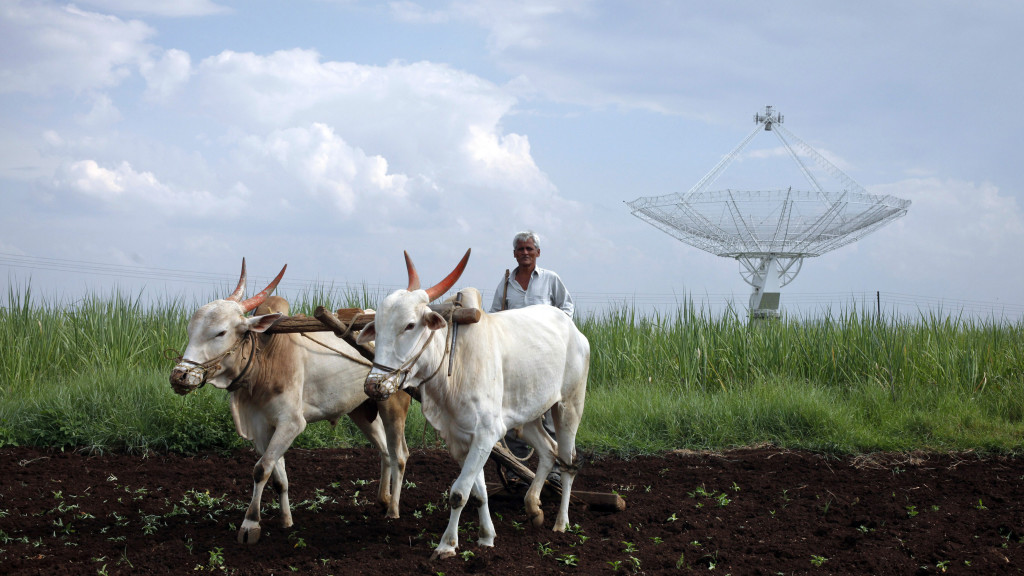 A farmer uses his oxen to till his land. Representative image. Photo: REUTERS/Vivek Prakash

Farmers retain milch animals, while bulls are sold either to slaughter houses or to draw carts for transport purpose. The tractor has literally edged oxen out of agriculture, as it performs most of the functions – tilling, sowing, seeding, harvesting and threshing – which the animals were used for, Dasaradharami Reddy said.

Rao also agreed, saying the cost of owning oxen outweigh the benefits. In the Rayalaseema region, the crops of most farmers are rainfed and do not have access to agriculture. Therefore, they depend on a single crop like groundnut for the entire year.

“Agriculture operations hardly last for two months. If we want to engage oxen for two months, we will have to feed them for the whole year, which is expensive. Instead, farmers find it viable to rent tractors,”  Nageswara Rao said.