Two police cases and a raft of dodgy tweets are part of Anantkumar Hegde's political legacy. 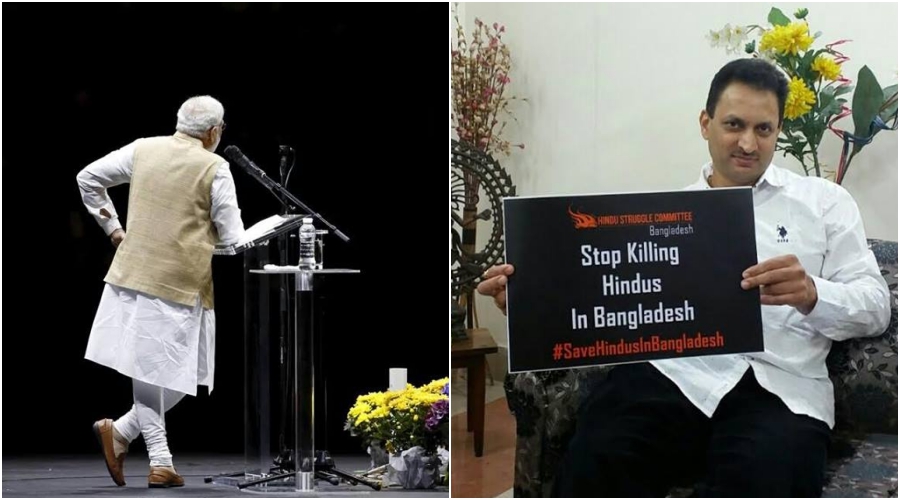 New Delhi: Prime Minister Narendra Modi, wary of the fact that his earlier decisions have been dissected as caste balancing acts, chose his new cabinet colleagues based on “deep research about the background and accomplishments of the person”, the Economic Times reported on Tuesday.

Factors like the number of followers on social networking sites like Quora, and a mention in TIME magazine’s list of ‘100 Young Global Leaders’ helped seal the deal for Rajasthan MP Gajendra Singh Shekhawat and IAS officer K.J. Alphons.

While the prime minister was impressed by MoS Hardeep Singh Puri’s experience in student politics and his participation in the JP movement, R.K. Singh’s speeches in parliament and Satya Pal Singh’s experience in anti-Naxalite operations, the ET reports fails to mention what it is about Anantkumar Hegde that made Modi sit up and take notice – and hand over the skills development portfolio to him.

Perhaps this is because Hegde, a five-time BJP MP, was caught on CCTV assaulting doctors at a private hospital in his hometown of Sirsi. According to an Indian Express report, the police had to file a suo motu case after the doctors and the hospital authorities refused to report the incident.

He was booked under Section 4 of the Karnataka Prohibition of Violence against Medicare Service Personnel and Damage to Property in Medicare Service Institutions Act of 2009 and under Sections 323 (voluntarily causing hurt), 341 (wrongful restraint), 504 (intentional insult to provoke breach of peace), and 506 (criminal intimidation) of the Indian Penal Code (IPC) after news channels aired the CCTV footage.

In a separate incident, Hegde, who has been a member the Rashtriya Swayamsevak Sangh (RSS) and an activist of the Akhil Bharatiya Vidyarthi Moracha (ABVP), was also booked for hate speech for making derogatory remarks against Islam.

Hegde was quoted to have said “as long as there is Islam in this world, there will be terrorism” during a press conference in his Uttara Kannada hometown.

In an interview to the Indian Express, Hegde claimed that it was his “honest” opinion that terror will only end if one particular religious ideology was eradicated.

“Across the globe, terrorism is taking place in the name of Islam. US President Barack Obama and Hillary Clinton have also said it. Islam as an ideology should be eradicated. It’s not a geo-political war nor a battle against unemployment or poverty. It’s an ideological war,” he said.

Claiming that “peace” and “Islam” were opposites, he added, “They are just opposite words, practically, even if it is said that Islam stands for peace.” 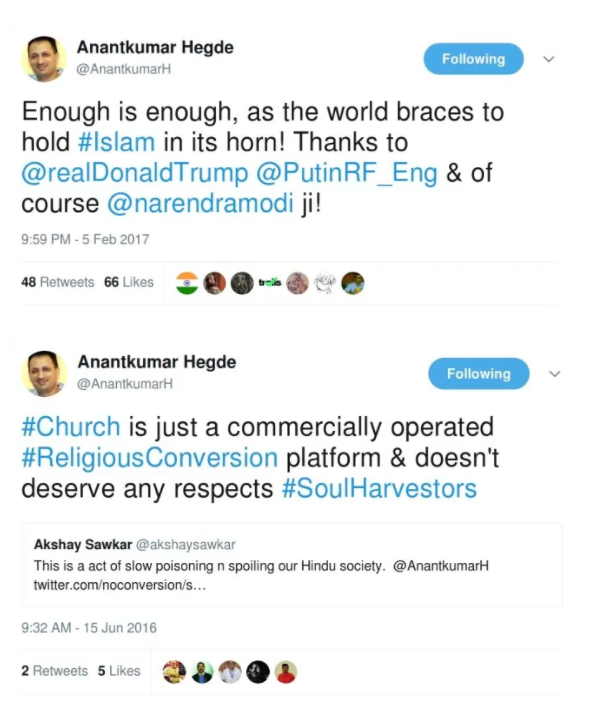 Hegde also claims that churches are nothing but religious conversion platforms and we would be living in ‘Akhand Bharat’, a right wing fantasy where Islam doesn’t exists, if it wasn’t for Buddhism. 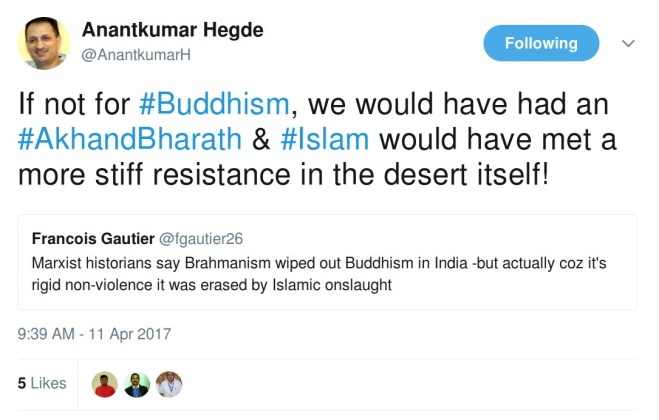 Hegde, who also commissioned a documentary about himself titled The Real Hindu to spread his own legend, played the communal card to win his seat in the 2014 Lok Sabha elections.

He claimed that Congress leader R.V. Deshpande, whose son was his opponent, had sheltered Indian Mujahideen terrorists in Bhatkal.

His views on Ayodhya also fit the narrative the Sangh parivar and BJP has been fielding for years.

An AltNews.in report shows that the newly-appointed minister has the mindset of a garden-variety right wing troll when it comes to his Twitter history.

He shared a photograph of JNU student leader Kanhaiya Kumar with a woman implying that Kumar had improper relations with his teachers. 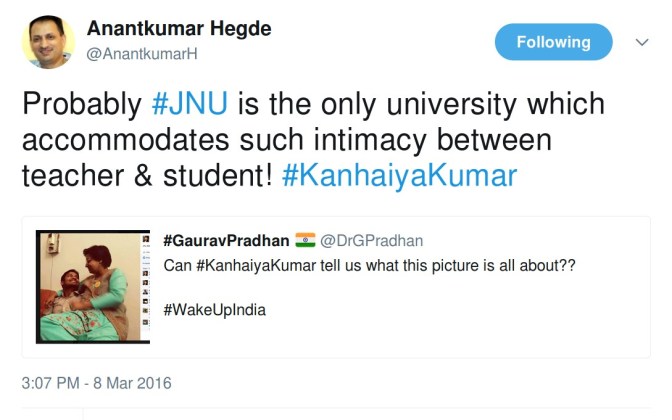 The photograph shared by Somya Mani Tripathi, a research scholar and Kanhaiya’s friend, on Facebook a while ago and was used by anti-JNU campaigners to malign Kanhaiya and question his character.

Hegde, who refers to Indira Gandhi as Maimuna Begaum and West Bengal CM Mamata Banerjee as Mumtaz and wants journalist Rana Ayyub to be under surveillance for ‘anti-India activities’, loves to use the derogatory term ‘presstitute’ while talking about media persons. The term was coined by his colleague General (Retd.) V.K. Singh, who is a junior minister in the Ministry of External Affairs.

Hegde is not the only BJP minister with a shocking Twitter history. In July 2016, Anupriya Patel claimed a series of deleted communal tweets had been issued by someone impersonating her. She filed a police complaint as well but it is not clear what the fruits of the police investigation have been over the past year.

Note: An earlier version of this story claimed that Hegde has deleted some of his tweets. They are still available on his Twitter timeline.