One of the placards said, ‘Omit Shah’, while another had a quote from the defiant writer, Nabarun Bhattacharaya, ‘Ei Mrityu Upottoka Amar Desh Na (I refuse to call this valley of death my country)’.

Locals, students and bauls staged their protest against BJP’s deliberate attempt to use Tagore as a political tool and for changing the long traditions of Visva-Bharati University. 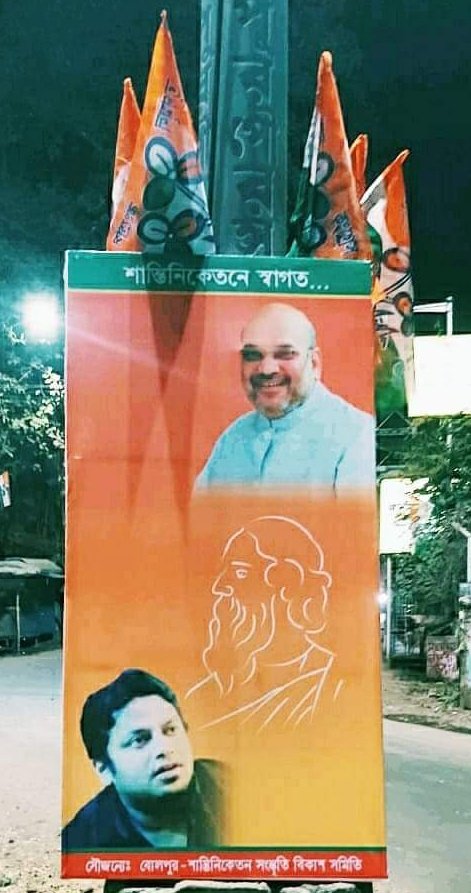 Sixty-three-year-old Dharmadas Baul was protesting at Sonajhuri. When asked about the reason for his protest, he said, “Why was the Poush Mela (a yearly fair for indigenous art work) stopped? How will we earn? How will we live? They (RSS and BJP) are trying to change the tradition and culture of Shantiniketan. We will not accept this. That’s why we are protesting here.”

Monisha Bondhopadhya, a former student of Visva-Bharati, and currently a local resident said, “BJP represents everything that Tagore opposed. BJP is trying to appropriate Rabindranath to fit into their narrative. The current VC is trying hard to saffronise the campus and erase the ideas and principles of Tagore. We strongly condemn it.”

The BJP Bengal unit put out flex banners across Shantiniketan to welcome Shah with a sketch of Tagore below Shah’s picture, which irked local residents and students. Following the growing dissent in various quarters of the university town, the saffron party removed the banners.

Speaking to the local media, Anupam Hazra, national secretary of BJP said, “It is pre-planned by the TMC to disrupt our programmes here. Some organisations inclined to TMC purposely put up such demeaning posters across Shantiniketan. People now understand everything.”

Also read: With Polls Imminent in Assam and Bengal, BJP Is Now Dragging Its Feet on the CAA

The Wire has learnt that two student leaders of the varsity, Falguni Pan and Somnath Sow have been put under house arrest since Saturday night’s protest rally.

Speaking to The Wire, Falguni Pan confirmed that a police officer was posted at his rented house and he was told that he ‘can’t come out of the house until further order’. However, no official note or letter was given to him to confirm the action. Pan is currently pursuing post-graduation in Economics from Visva-Bharati. “On December 19, a procession was called by the Student Unity against the arrival of Amit Shah, accused of murders and riots, in Santiniketan. From then on, the pressure politics started on the representatives of Visva-Bharati Student Unity. To ensure there is no further agitation on Amit Shah’s rally on Sunday, the police put me and another member under house arrest since last night. But the student representatives will not bow to this pressure and will continue to voice dissent,” Pan told The Wire.

“A person who is accused of rioting is not welcomed at Tagore’s land. BJP is a divisive party and Tagore believes in pluralism. When lakhs of farmers are protesting in Delhi, the home minister is touring Bengal to garner votes. We condemn this,” said Debabrata Nath, a diploma student of the varsity.

After visiting the university, Shah tweeted, “Visited the iconic Sangeet Bhawan of Visva Bharati University, Shantiniketan. The aura of Gurudev Tagore is still very much here. We are committed to fulfil Gurudev Tagore’s dream and restore the lost glory of Bengal.”

The Union minister later had his lunch at a Baul singer’s house in Shyambati in Bolpur. In the evening, he held a roadshow in Bolpur from Hanuman mandir on the Stadium Road to Bolpur Circle. 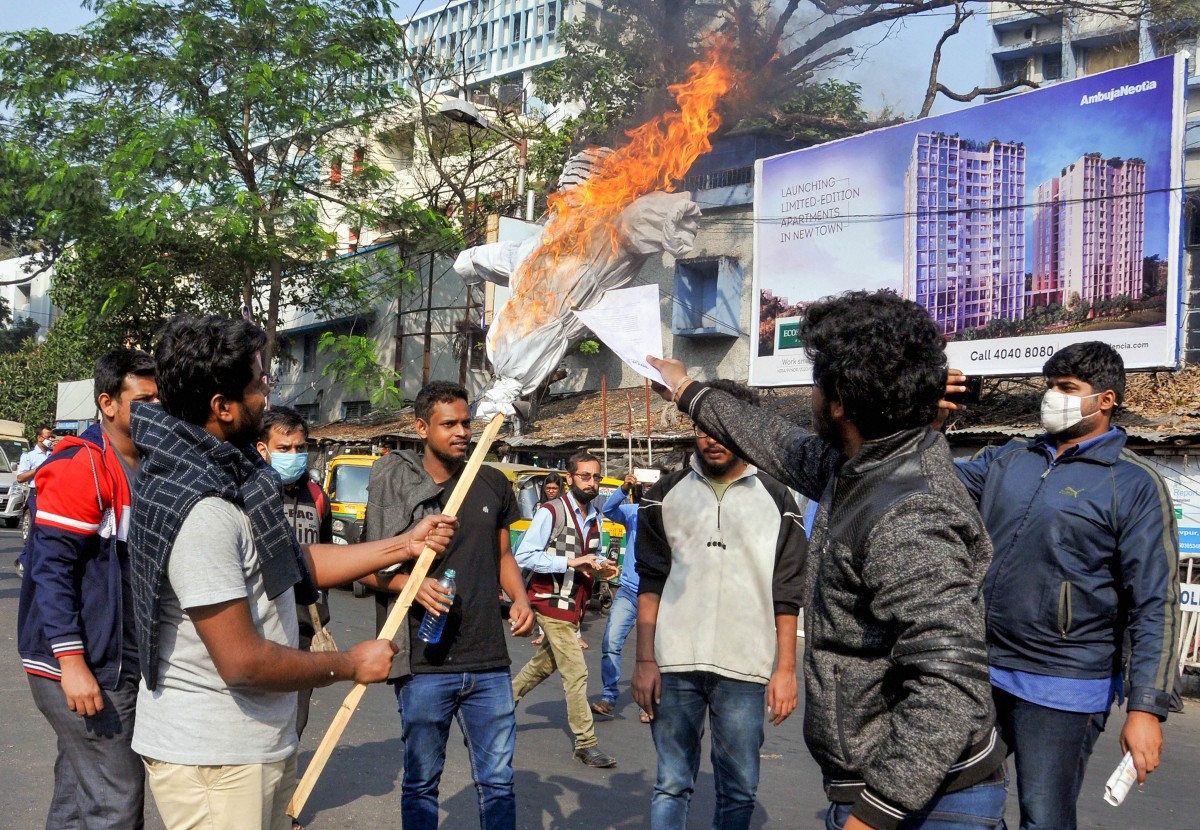 Students of Jadavpur and Calcutta Universities stage a protest against the new farm laws during the two-day visit of Union home minister Amit Shah in West Bengal, in Kolkata, Saturday, December 19, 2020. Photo: PTI

In recent months, the BJP has increasingly been using Tagore to bolster its Bengali credentials and counter the ‘outsider’ rhetoric of Trinamool Congress. Ironically, while Shah spoke so highly of Tagore, earlier this month, senior BJP leader and Rajya Sabha MP Subramanian Swamy wrote a letter to the prime minister urging him to replace some words in the national anthem with the version of the ‘Jana Gana Mana’ composed by Netaji Subhash Chandra Bose’s Indian National Army.

TMC also hit back at BJP and took out a protest march in Tagore’s birthplace – Jorasanko Thakurbari in Kolkata. “A BJP-made poster has belittled the stature of Rabindranath Tagore. Let the people of Bengal know that those who are ignorant of Rabindranath have come to occupy Bengal,” said TMC veteran and minister Subrata Mukherjee.