While the BJP IT cell accused Modi government detractors of wrongly claiming "exaggerated" police action, many media outlets from India and abroad confirmed the use of physical force by the police against farmers.

Viral picture of a policeman swinging a baton at a farmer during farmers' protests. Photo: Instagram/Choudharyravi 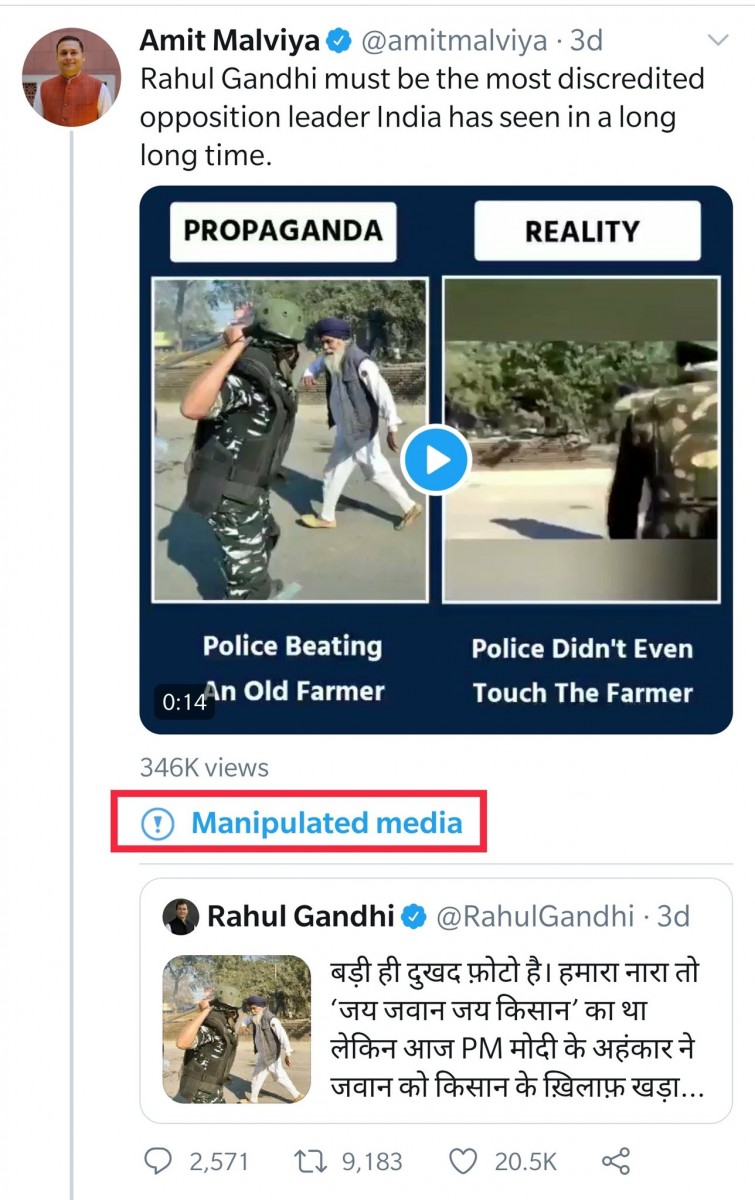 A photograph of a policeman swinging his baton at an elderly farmer was shot by PTI photojournalist Ravi Choudhary. The picture soon began to circulate widely on social media.

Capturing this moment was very difficult for me. https://t.co/mzmOEpMmnN

It was also shared by Congress leader Rahul Gandhi in a tweet critical of the Modi government. BJP IT cell head Amit Malviya quote-tweeted Gandhi and shared a video of the lathi-charge in an attempt to prove that police action against the farmer did not take place because the baton “didn’t even touch” him.

Rahul Gandhi must be the most discredited opposition leader India has seen in a long long time. https://t.co/9wQeNE5xAP pic.twitter.com/b4HjXTHPSx

The video he shared was made by pro-BJP propaganda page Political Kida. It was also tweeted by Arun Pudur who claims to be a businessman but an investigative report by Forbes had found that his tech fortune may be fiction.

Police didn’t even touch the farmer, just waved the stick in air but one pic is smartly being used to make police the villian.

For their propaganda this is how Congress ecosystem can make anyone villian. pic.twitter.com/o40omcau0z

Amit Malviya’s tweet is a classic example of the straw man fallacy. He distorted Rahul Gandhi’s original statement as though the Congress leader indeed made the claim. Malviya essentially gave the impression of refuting Gandhi without actually addressing the argument.

“Today, PM Modi’s ego forced a soldier to stand up against a farmer,” is what Gandhi wrote. Nowhere has the Congress leader implied that the policeman’s baton hit the elderly farmer yet Malviya’s tweet attempts to portray that the protestor wasn’t thrashed. His argument introduces a stance that changes the point of Gandhi’s statement.

The answers to the following questions address Malviya’s claim:

Three new farm bills introduced by the Modi government were passed in the Parliament in September. Since then, farmer groups have been protesting fearing that the legislation makes them captive to big corporations and abolishes minimum support price.

PM Modi claimed that the government is committed to helping farmers and the protests are taking place because they are being misled. While the Prime Minister made this statement two months ago, the government’s version has been kept alive by mainstream media during the ongoing ‘Delhi Chalo’ protests. Several journalists are blaming “opposition and middlemen” for provoking farmers. There have also been attempts to discredit the protests by trending ‘Khalistani’ on Twitter.

However, visuals of police action against the protesters drew support for the farmers from India and abroad. Amit Malviya’s tweet is an attempt to suggest that there have exaggerated claims of police action.

But he used a clipped video to prove his (logically flawed) point.

A longer version of the video shows two cops swinging their batons at the farmer one after the other. Malviya’s video shows only the second cop whose baton missed the farmer.

In the above video, a faint hitting sound can be heard when the first cop flings his baton. But we are not able to visually verify whether the baton touched the farmer because the policeman blocks the camera.

PTI photojournalist Ravi Choudhary shared another photo of cops flinging their batons at the farmer on his Instagram profile. “I clicked the picture from the other side and it cannot be said with certainty whether the baton touched the farmer or not because there was a lot of commotion at the time. The police were lathi-charging at the protestors and the farmer was running in the other direction to save himself. He may have been hit by another cop earlier if not this one,” Choudhary told Alt News further adding, “There are several videos of police lathi-charging at farmers who also retaliated with stone-pelting.”

There isn’t a way to visually prove whether the baton touched the farmer or not unless a video shot from the other sides gives a clear view of the exact moment.

A board visible in the picture shared by Choudhary on this Instagram profile reads ‘Singhu border’ in Hindi.

Singhu border is on the Delhi-Chandigarh Highway. Farmers had set camps at the checkpoint after heavy police security and barricading prevented them from entering the national capital. Thousands of farmers from Punjab marched as part of ‘Delhi Chalo’ protests, many of whom carried tractors with food supplies and water.

Facebook page The Kantap reported from the area where farmers and policemen can be seen stone-pelting across the barricades. Cops can also be heard shooting tear gas shells as the reporter informs that the protestors broke barricades.

An NDTV broadcast shows moments before the protestors broke the barricades. Policemen are standing in a queue and shooting tear gas shells in the air to stop farmers from crossing over to their side.

An India TV broadcast shows police and paramilitary forces continuously firing tear gas as farmers break cemented barricades with tractors. Cops can be seen lathi-charging at farmers who have managed to cross over the barricading.

Visuals from Singhu border, therefore, show the extent of police action in retaliation to farmers breaking the blockade. Amit Malviya shared a few seconds of a clipped video to suggest that the elderly farmer wasn’t hit. This was an attempt to water down the force used by police against the protestors. It must be pointed out that whether one of the batons touched the farmer or not is irrelevant. The video was shot at a time when large numbers of protestors had broken police barricades and the cops were retaliating with lathi-charge and tear gas.