The group of 23 leaders getting vocal on a lack of formal party leadership during a period of crisis prompted some Delhi Congress workers to protest at Sibal’s house. 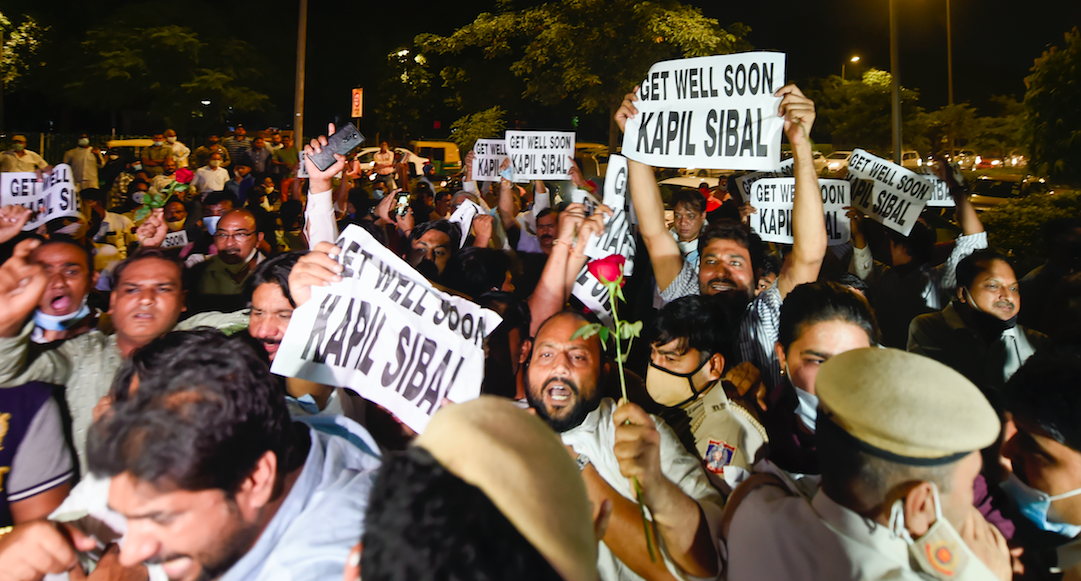 New Delhi: With Navjot Singh Sidhu’s latest rebellion – in which he abruptly resigned from the position of Punjab Pradesh Congress Committee chief – and the high-profile exits of former Goa chief minister Luizinho Faleiro and Assam leader Sushmita Dev from the party, the group of 23 senior leaders, or the ‘G-23‘, which had earlier demanded sweeping changes in the party leadership, has begun to assert itself, by raising its concerns with the media.

On September 29, a day after Rahul Gandhi inducted Leftist leaders Jignesh Mevani and Kanhaiya Kumar into the party, senior leader and lawyer Kapil Sibal used the Congress crisis to ask in a press briefing, “In our party, at the moment, there is no president, so we don’t know who is taking these decisions. We know and yet, we don’t know.”

Sibal, one of the most prominent faces in the G-23, demanded an immediate meeting of the Congress Working Committee to decide the fate of elections to the post of the party president.

The elections were supposed to be held after July – the CWC took a decision to postpone the internal election in light of the assembly polls and the crisis induced by the second wave of the pandemic. However, two months later, no notice regarding the internal polls has been issued by the party.

In what was construed as a dig at Rahul Gandhi, who has recently been taking all decisions during the ongoing crisis in Punjab or factional rivalry in Chhattisgarh, Sibal said the G-23 group was still with the Congress unlike those the Gandhi family considered close but have now left the party.

Both Jyotiraditya Scindia and Jitin Prasada, once seen as part of the Rahul Gandhi coterie, have joined the Bharatiya Janata Party. Sibal said that the G-23 was an integral part of the grand old party but did not function as “yes men”, indicating that it will keep raising issues pertinent to the internal democracy in the party.

Also read: Why It Is Unjust to Hold Rahul Gandhi Responsible For Congress’s Plight

“It’s ironic that those who were their khasam khaas (special ones), they left them. And those people who they believed are not their special ones, they are standing with them today,” Sibal said, adding that he could not bear to see his party in the current situation.

“It breaks my heart,” he said, also chipping in with an input on the Punjab crisis – that the factional fight in the border state may be used by the “ISI and Pakistan” to its advantage.

“One thing is clear, we are not Ji Huzoor 23…We will put forward our points, and will continue to do so. And we will repeat our demands,” Sibal said.

The G-23 raising its head during a period of crisis prompted some Delhi Congress workers to protest at Sibal’s house. The workers carried placards that read “get well soon” and shouted slogans of “Gaddaron, party chhoro (‘traitors leave the party’)”, “Leave the party! Come to your senses!” and “Rahul Gandhi Zindabad!”.

At the same time, multiple Delhi PCC leaders fuelled emotions against Sibal and other leaders of the G-23. Delhi Congress leader Anil Chaudhary said that he didn’t agree with Sibal’s remarks while condemning any protests in front of his house, while Ajay Maken went ahead to issue a statement against Sibal.

Curiously, the Congress leadership has not responded to the promises made to the G-23 earlier.

It is unclear when the internal polls would be held and the level of election preparations that the central election committee formed by the party a few months ago has reached. When questioned about the possibility of internal polls anytime soon by The Wire, Congress spokesperson Supriya Shrinate refused to comment.

It is clear that the lack of clarity in the party regarding the impending polls has given room to the G-23 to raise these issues again. On the day when Mevani and Kumar were inducted, another senior leader, Manish Tewari, also took a dig at Rahul Gandhi for taking unilateral decisions without having any formal position in the organisation. Congress leader Rahul Gandhi being welcomed during the inauguration of Recreation Center for Senior Citizens at Pulparamba in Kozhikode, Wednesday, Sept. 29, 2021. Photo: PTI

“For such a long time, we are waiting, and there is a limit to waiting. We are among those who will stand with the Congress, and will always stand with it. We have never given any statement against the Congress, and are not doing so even today,” he added, while asserting that the Congress was the only party which could save the republic and provide a strong opposition. Sibal also asked renegade leaders to return to the Congress fold.

Soon after the protests at Sibal’s house, another senior leader, part of the rebel group, Anand Sharma tweeted to express his “shock and disgust”.

Shocked and disgusted to hear the news of attack and hooliganism at Kapil Sibal’s house. This deplorable action brings disrepute to the party and needs to be strongly condemned.

“Congress has a history of upholding freedom of expression. Differences of opinion and perception are integral to a democracy. Intolerance and violence is alien to Congress values and culture. Those responsible must be identified and disciplined,” Sharma said.

Thiruvananthapuram MP Shashi Tharoor also called the demonstration “shameful,” and sought to train focus on the party’s priority of taking on the BJP, noting that as a democratic party, Congress must listen to what a ‘true Congressman’ like Sibal had to say.

That is shameful. We all know @KapilSibal as a true Congressman who has fought multiple cases in court for @INCIndia. As a democratic party we need to listen to what he has to say,disagree if you must but not in this way. Our priority is to strengthen ourselves to take on theBJP! https://t.co/XmtdHapach

However, those against the G-23, like Maken, said that Sonia Gandhi continues to lead the party, so the question of a defunct leadership does not arise. He said that Sibal’s intervention demoralised the party cadres and he should not “denigrate the organisation which has given them political identity”.

Regarding the CWC meet, he said, “The meetings of the CWC and that of party general secretaries have been held at least half-a-dozen times in the last few months…where everyone has been given full opportunity to air their views.”

Youth Congress president Srinivas B.V, who has played an active role in relief work during the pandemic, also sided with the Gandhis.

“The ‘President’ and ‘Leadership’ of the party are the same, who always took you to Parliament, made you a ‘minister’ during the good times of the party. When in opposition, sent you to Rajya Sabha, rewarded with responsibilities,” he tweeted, supporting the protests outside Sibal’s house.