Akhilesh, Tejashwi Voice Support for Mamata, But No Clarity on Alliance Yet

Tejashwi met the TMC chief in Kolkata and urged people from Bihar living in West Bengal to stand with her party. 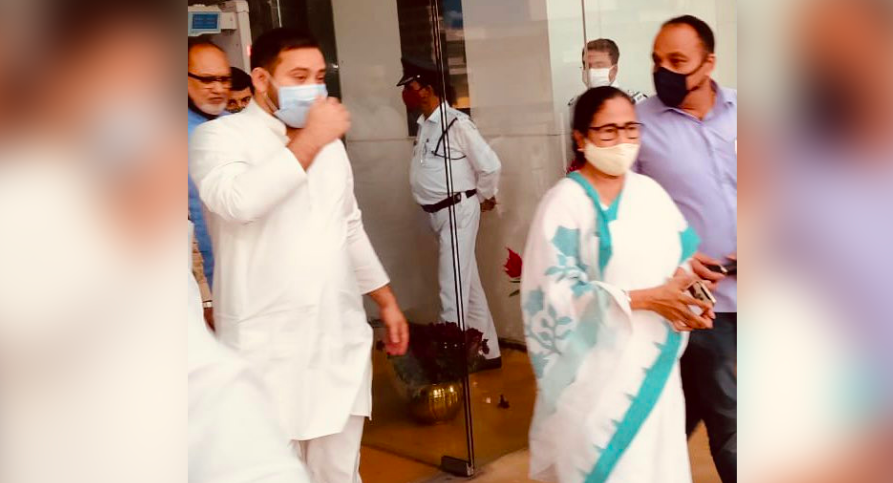 RJD and SP have limited presence in Bengal and are in the opposition chiefly in Bihar and Uttar Pradesh respectively.

However, Akhilesh’s vocal support for Mamata and Tejashwi meeting with the Bengal chief minister in Kolkata have led to speculation on a pre-poll tie up between the three parties.

Emerging from a meeting with Banerjee, Tejashwi, the Leader of the Opposition in the Bihar assembly, said his first priority was to prevent the BJP’s forward march in West Bengal.

When reporters asked him as to whether RJD will be contesting a few seats in West Bengal in alliance with the ruling TMC, he said, “When Mamata ji is fighting, it is we who are fighting. We will put in all effort to ensure that she wins. Our full support is with her and her party.”

Tejashwi urged people from Bihar living in West Bengal to stand with the ruling TMC, which is facing a stiff challenge from the BJP in its bid for a third straight term in office.

Banerjee, on her part, referred to Lalu Prasad, the jailed RJD supremo and Tejashwi’s father, as a “father figure” to her with whom she shared “mutual respect”.

She claimed Lalu, who is in jail following his conviction in fodder scam cases, was “deliberately” kept incarcerated as his freedom would have meant defeat for his rivals in Bihar, where assembly elections were held late last year.

When asked why he was extending support to the TMC which is contesting the polls in West Bengal against its old ally the Congress, Tejashwi said,” Our alliance (with Congress) is in Bihar. In Kerala, the LDF and Congress-led UDF are opponents.”

The Left Front and the Congress have forged an alliance in West Bengal, while they are vying for power in Kerala.

West Bengal is home to a large number of Hindi speaking people from Bihar, Uttar Pradesh and Jharkhand, he said, adding the RJD’s stand is to provide “full support” to Banerjee. “We will stand by her wherever required,” he said.

Meanwhile, SP national spokesperson Rajendra Chaudhary was quoted as having said that Akhilesh spoke to Mamata on the phone.