Who Was Ajay Mishra Before He Became a Legislator?

The Union minister of state for home affairs was acquitted in a 2000 murder case, but appeal is still pending before the Allahabad high court, and the case is still sub-judice.

Ajay Kumar Mishra is one of the three ministers of state in the Ministry of Home Affairs (MHA). Some of his personal and professional information can also be seen on the official website of the MHA. But there seems to be more to Mishra than meets the eye.

The first official statement that put Mishra almost right at the top of the news was a post from the Twitter handle of the UP Police on October 4, which said:

“In the unfortunate incident of Lakhimpur, 8 casualties have been reported till now as per the district administration. ADG LO, ACS Agriculture, IG Range & Commissioner are on the spot & situation is under control. Adequate deployment has been done to prevent any untoward incident.”

In the unfortunate incident of Lakhimpur, 8 casualties have been reported till now as per the district administration. ADG LO, ACS Agriculture,IG Range & Commissioner are on the spot & situation is under control.Adequate deployment has been done to prevent any untoward incident.

Though the police reported it first just after midnight on October 4, the sequence of events that ended in tragedy began on October 2, when the Samyukta Kisan Morcha (SKM) had called for a ‘black flag’ demonstration at Lakhimpur Kheri’s Tikunia at 9 am on October 3. On that day, Uttar Pradesh deputy chief minister Keshav Prasad Maurya and Union minister of state for home affairs Ajay Kumar Mishra ‘Teni’ were expected to pass through that area on their way to a wrestling tournament at the village. The demonstration was planned to protest Mishra’s provocative speech on September 25.

He is reported to have said in the speech, “Face me, it will take just two minutes to discipline you fellows… I am not only a minister or an MP and an MLA… People who know me even before I became a parliamentarian know that I never run away from taking on challenges. The day I accept a challenge you all will have to leave not only Palia (a local place in the district) but Lakhimpur itself.”

On October 3, a car that was part of the Union minister’s convoy ran over protesting farmers, killing four of them and injuring several others. The violence that erupted after the incident killed four more people.

Farmers alleged that one of the vehicles belonged to Ashish Mishra, the son of Union minister Ajay Mishra. So far, the minister and his son have both maintained that Ashish was not present at the site of the violence, and that he was at the wrestling tournament in the village.

Also read: It Was Not Just Farmers Who Were Murdered in Lakhimpur Kheri

Later, following the talks between Rakesh Tikait and the state government, a compromise was reached, which included a compensation of Rs 45 lakh to the families of the slain farmers and a judicial probe into the incident.

While the unrest continued, it seemed to be ‘life-as-normal’ for both the Union and the state government. Prime Minister Narendra Modi visited Lucknow on October 5 — just two days after the incident — to participate in the Urban Conclave organised by the state’s urban development department and ‘Azadi ka Amrit Mahotsav’ celebrations. Despite being just 130 kilometres away from Lakhimpur Kheri, the prime minister didn’t visit the violence-hit area, inviting Opposition criticism.

A week after the incident, the UP Police arrested Ashish on October 9.

The criminal cases against Ajay Mishra

On September 25, the Union minister had warned farmers that he would teach them a lesson.

Trying to find out who he was before he became a legislator, the author came across the following information:

Then, in 1996, a ‘history sheet’ was opened in his name at Tikonia police station, but closed after a few months.

In 2000, he was named in an FIR in connection with the murder case of 23-year-old Prabhat Gupta, who was shot dead in the Tikonia area of Lakhimpur Kheri. He was acquitted in 2004, but the family of Gupta filed an appeal in the Allahabad high court, and the case is still sub-judice.

The author accessed the self-sworn affidavits that Ajay Mishra had submitted to the Election Commission while contesting polls to the state assembly and parliament. It was possible to access three affidavits filed by Mishra, one in the 2012 UP assembly elections, and one each in the 2014 and 2019 Lok Sabha elections. A perusal of the three affidavits reveal the following:

2012 UP assembly election: Ajay Mishra declared one case — “Crime no. 92/2005, Case No. 3592/07, 3593/07, court taken cognizance” — in which he was charged with five sections of the Indian Penal Code (IPC) 147 (punishment for rioting), 323 (voluntarily causing hurt), 504 (intentional insult with intent to provoke breach of the peace), 506 (criminal intimidation), and 452 (House-trespass after preparation for hurt, assault or wrongful restraint). The affidavit also says that an appeal is pending in the high court against the minister’s acquittal for murder. 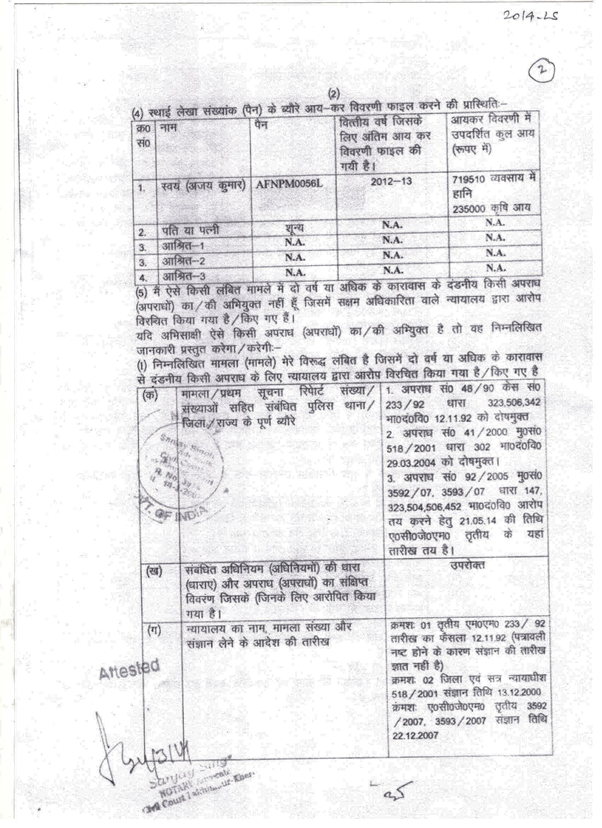 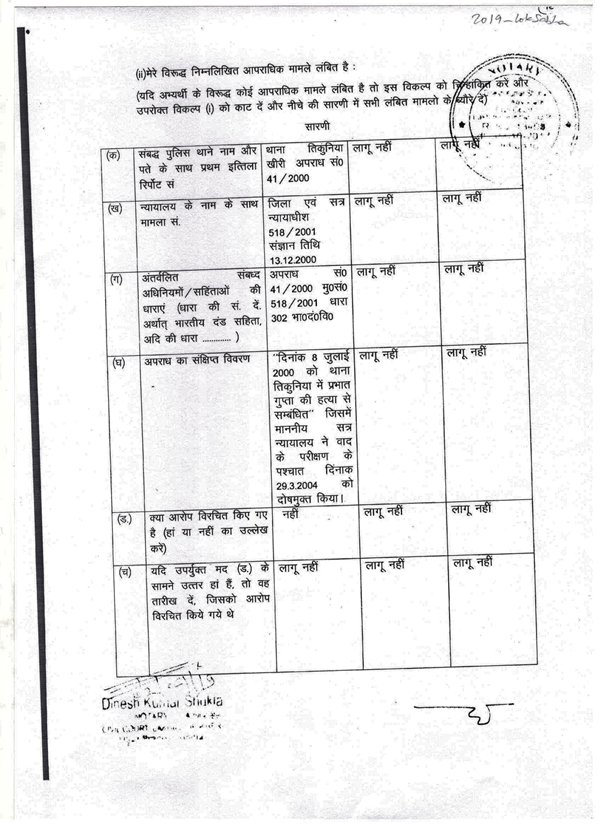 Jagdeep S. Chhokar is a lawyer. Views are personal.