The Madras high court, in a late-night hearing on June 22 had restrained the AIADMK General Council from taking any decision on the single leadership formula pushed by EPS. The conception of unitary leadership goes against the dual power-sharing arrangement agreed upon between EPS and OPS factions after the death of party supremo J. Jayalalithaa in December 2016. Disappointed with the turn of events in the General Council meeting, OPS and his aides walked out of the venue in a huff. The meeting, which lasted about 40 minutes, saw chaotic scenes, as supporters from both factions raised slogans in favour of their respective leaders.

Earlier, the OPS faction had agreed to a total of 23 resolutions, of which figured nothing on the leadership question. However, soon after the meeting began on Thursday, following the brief remarks made by EPS and OPS, senior leader C.V. Shanmugam announced that all 23 proposed resolutions were rejected by General Council members.

“Their one and only demand is for a single leadership,” declared deputy secretary K.P. Munusamy later.

At this stage, OPS walked out of the meeting after briefly sharing the dais with EPS. 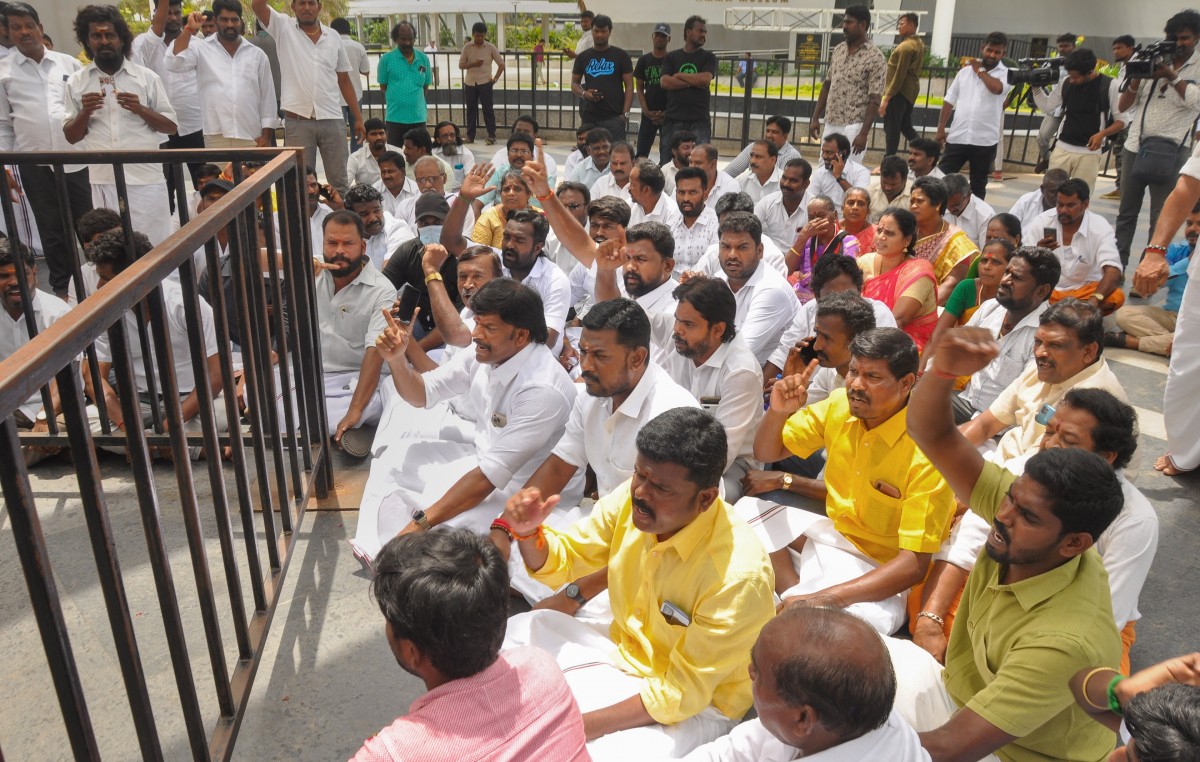 Earlier, the Madras high court, in a late-night hearing on Wednesday, June 22, restrained the AIADMK General Council from taking any decision on the single leadership formula pushed by EPS. Instead, the court said the party’s highest decision-making body can only adopt the 23 resolutions already listed, according to The Hindu.

Prior to the late-night ruling, the high court, earlier in the day on Wednesday, had refused to restrain the General Council meeting. Subsequently, the OPS faction appealed against the ruling, leading to an urgent late-night hearing.

The leadership tussle between EPS and OPS has been brewing for some time, with the former’s supporters from last week beginning to aggressively push for single leadership. The divergence on the leadership question resulted in the OPS faction moving the court. It opposed the amendment of the bylaws of the AIADMK constitution to change the dual leadership pattern being followed thus far and hence appealed for restrictions on what to be discussed in the General Council meeting.

For its part, the EPS faction argued in the court that what should be discussed in the meeting cannot be pre-determined, as discussions happen based on what the members think, according to NDTV.

To address the leadership question, the OPS faction has also been calling for a high-level committee, comprising senior leaders who had worked with party founder M.G.Ramachandran and Jayalalithaa, to be constituted to guide the leadership.

In his defence, OPS argues that, in the aftermath of Jayalalithaa’s death, the party’s General Council had resolved to make Jayalalithaa the ‘eternal general secretary’ while deciding upon the pattern of dual leadership, for now, shared between EPS and OPS. Any changes to this arrangement and constitution, the OPS side argues, would be tantamount to “betrayal”, the NDTV report said.

When Jayalalithaa was convicted of corruption charges, forcing her to step down as chief minister, she hand-picked OPS twice to stand-in for her. Although OPS was made chief minister the third time before Jayalalithaa passed away, Jayalalithaa’s aide V.K. Sasikala, who briefly took over the party, replaced him with EPS after he rebelled against her.

After Sasikala went to jail for corruption, both OPS and EPS worked out a rapprochement deal and expelled Sasikala. Both then agreed to the dual leadership formula, which is now being undermined by the EPS faction.