With Ahmed Patel's Death, Congress Will Have the Tough Task of Filling His Shoes

For someone who has five decades of political experience and spent almost four decades as an MP, there is no readymade substitute.

With the demise of master strategist Ahmed Patel, the Congress does not have even a single leader who can mediate with allied parties or regional satraps. In a two-decade-long association, the Congress and Sonia Gandhi profited greatly from Patel’s many skills.

I first met Ahmed Patel after the United Progressive Alliance (UPA) second term ended in 2014. But before that, when I started out as a journalist in 2008, the UPA was in power at the Centre in its first term. The Congress had formed the government in coalition with many regional and left parties.

At the time, cabinet ministers and chief ministers would line outside Patel’s house. He was one of the most important men of the government between 2004 and 2014.

More than their rapport with Sonia Gandhi or prime minister Manmohan Singh, the Congress ministers were more concerned with being in the good books of Ahmed Patel. Even veteran leaders like Pranab Mukherjee would discreetly want to know every syllable Patel uttered.

But who was Ahmed Patel? He was the pillar of conventional politics in the Congress. Among his many roles were seeking feedback from workers at the grassroots level and passing it on to the high command. He also counselled the party president, and, most significantly, rounding up support for policy decisions.

Besides being the champion of traditional and conventional politics, Patel expertly bridged the gap between the old school politicians and leaders of the present age of social media and technology.

Patel’s absence will be felt the most in the coming days, as Sonia Gandhi gears up to hold talks with leaders like Sharad Pawar, Mamata Banerjee, Mayawati, Akhilesh Yadav, Hemant Soren, Tejashwi Yadav, M.K. Stalin and Badruddin Ajmal.

Patel was a shrewd political strategist. For instance, although he was on good terms with P.V. Narasimha Rao (then prime minister) and Sitaram Kesri (then Congress president), when Sonia Gandhi agreed to take charge of the party, as a long time loyalist of the Gandhi clan, Patel immediately rallied support for Sonia Gandhi.

This despite the fact that Patel used to be very close to Sitaram Kesri. When the latter relinquished the post of treasurer to become the party president, Patel was the one to replace him.

Besides, Narasimha Rao was also fond of Patel. Both Rao and Manmohan Singh wanted him to join their respective cabinets. However, staying away from the limelight, Patel played an effective role in the government’s decision-making.

After the demolition of Babri masjid, Ahmed Patel resigned as the general secretary of the Congress, but it was never accepted by then Congress president Narasimha Rao.

After the Atal Bihari Vajpayee-led BJP government collapsed, a faction led by Arjun Singh, Makhan Lal Fotedar, Natwar Singh and V. George convinced Sonia Gandhi to announce the formation of a government before the media, following which Sonia Gandhi made the famous ‘I have 272’ remark.

However, the party did not have the numbers. Sonia Gandhi was a novice in politics and committing such a blunder hurt the party’s leadership as well as her own reputation. At that time, it was Ahmed Patel who lent support to Sonia Gandhi for leading the party.

Later, when Sonia Gandhi needed allies to fasten her grip over the party, Patel was appointed as political advisor. For 20 years, he played the role of troubleshooter for every distressed and disgruntled party worker at some point or another. 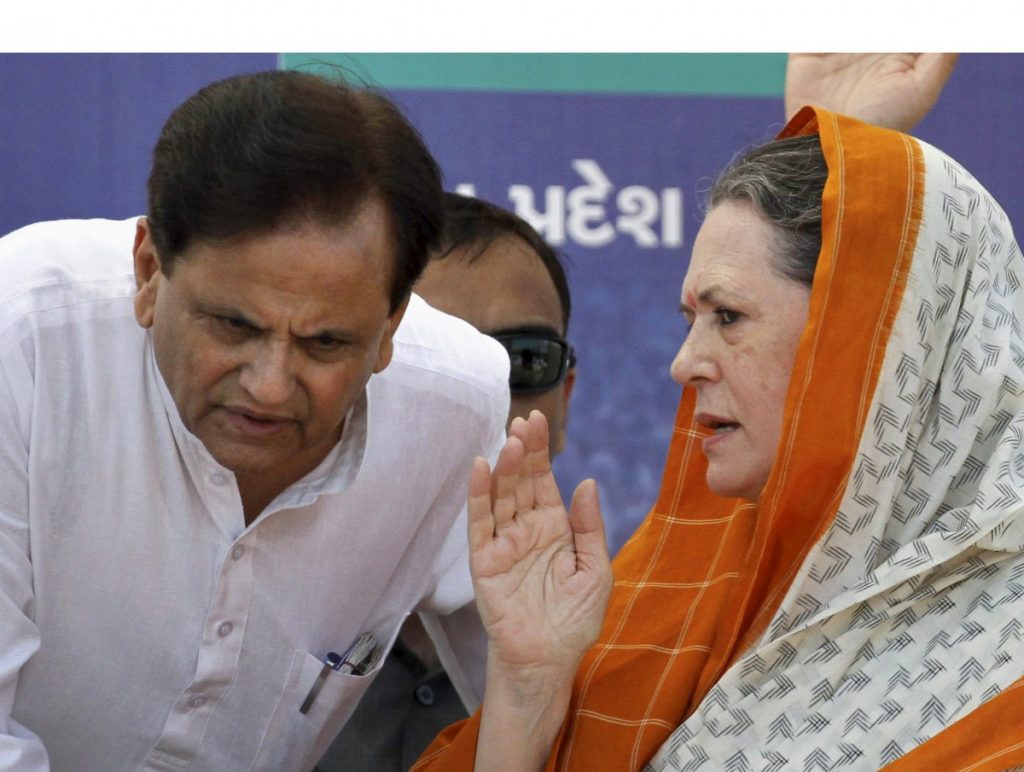 In the 2014 Lok Sabha elections, the Congress was confined to 44 seats. Rahul Gandhi and his team had started wielding more influence in the party. Sonia Gandhi began withdrawing and slowly handed over the reins to her son.

Meanwhile, unhappy with being ignored, Patel limited his political role to that of advisor to Sonia Gandhi.

Patel used to tell me with a heavy heart at the time, “I feel like retiring from politics now, and return to my village in Gujarat.” After the party lost power at the Centre, it began facing a shortage of resources. In many state assembly elections, the party’s poll campaign suffered due to this.

Sonia Gandhi, with the consent of Rahul Gandhi and Priyanka Gandhi, then convinced Ahmed Patel to become the treasurer again despite Patel’s protestations that he could not shoulder the responsibility efficiently. But Sonia Gandhi trusted his skills and refused to yield.

Patel was finally persuaded to accept the post and remained the treasurer, through Rahul Gandhi’s term as party president and until he breathed his last.

In fact, if the contrasting terms of Sonia Gandhi and Rahul Gandhi as party president are compared, much of the credit for the former’s success goes to Ahmed Patel.

Rahul Gandhi could not forge another ‘Ahmed Bhai’. Along with close allies of the Gandhis such as Janardhana Dwivedi, Ambika Soni, Arjun Singh, V. George, Natwar Singh, Sonia Gandhi’s political strategist became the go-to man in the Congress to reach the top brass.

Also Read: Ahmed Patel Carved a Unique Space for Himself in Indian Politics

For someone who has five decades of political experience and spent almost four decades as an MP, there is no substitute. After 2014, the Congress has invested only in a few leaders.

However, Rahul Gandhi has claimed in several meetings that he will not repeat the ‘mistake’ of his mother – of having a private secretary, which corrals power towards one person. Instead, a group of leaders would take major decisions, he said.

Despite this, Congress general secretary K.C. Venugopal, who hails from Kerala, Haryana’s strongman and media in-charge Randeep Singh Surjewala and Gujarat in-charge Rajeev Satav, who hails from Maharashtra, are close to Rahul Gandhi and considered to be his advisors.

In August, when Sonia Gandhi completed one year as as party president in her second term, Rahul Gandhi’s associates were handed important portfolios in the party with the approval of Sonia Gandhi.

During the UPA government, most of the young leaders used to address Rahul Gandhi as RG, but Gandhi has now distanced himself from the youth leaders.

For Congress general secretary Venugopal, his biggest hindrance is that he cannot speak Hindi. As a result, Congress workers in North India are unable to convey their issues to him.

The second major problem is that KC Venugopal is unable to follow the lead of former general secretaries, especially Ashok Gehlot, who used to keep their doors open for party workers from any part of the country and lent an ear to them.

Another contender is Randeep Singh Surjewala. It is difficult for one person to handle all crucial jobs such as poll management, media, resources and others. But if anyone can be relied upon for all these duties, Surjewala’s name comes to mind.

His command over language, his ability to make workers feel at ease, to put forth his opinion with dignity among the top brass and to coordinate with leaders of the older generation and the youth, are among his political strong points.

This is clear from the way he has managed his duties as media in-charge. He has taken on board P. Chidambaram, Anand Sharma, Ghulam Nabi Azad, Kapil Sibal, Abhishek Manu Singhvi along with Manish Tiwari, Ajay Maken, R.P.N. Singh, Jayveer Shergill, Pawan Khera as part of his team. 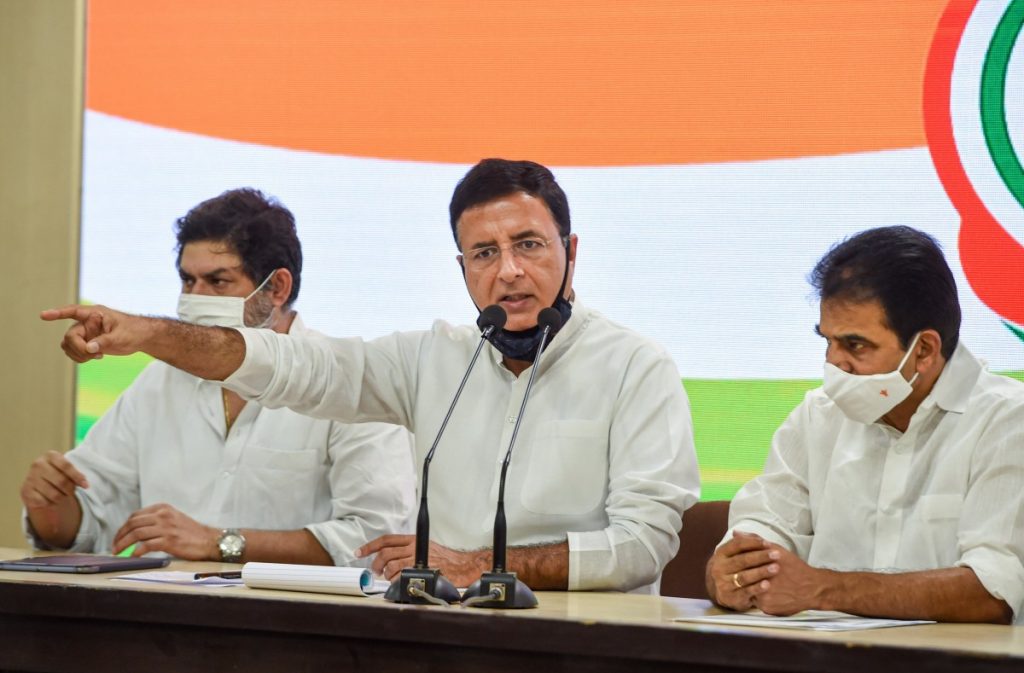 Another person who may be in the running is Rajiv Satav, who emerged as a tall leader after Rahul Gandhi became the party president. Rajiv Satav was made a member of the Rajya Sabha from Maharashtra this year even as more senior and experienced leaders like Mukul Wasnik, Avinash Pandey and Rajni Patil were also eyeing the seat.

Satav’s importance can be gauged from the fact that Rahul Gandhi has made him in charge of Narendra Modi and Amit Shah’s home turf, Gujarat.

Ahmed Patel began as a student politician (he became the national president of the Youth Congress) and scaled the heights of party and national politics. One of the chief characteristics of Patel was that he was a backroom political strategist who maintained a low profile image.

Also Read: We Will Never Know Whether Ahmed Patel’s Voice Was His Master’s or His Own

Who will be the next Congress treasurer?

With Patel’s death also comes the question of who will be the next treasurer of the Congress. There are several contenders in the fray. The first contender could be Kanishka Singh, son of former foreign secretary S.K. Singh, close to the Gandhi family, who is currently handling all legal matters of the family.

Milind Deora, son of Murali Deora who was a close friend of Rahul Gandhi, is another contestant though there is an alleged rift between the two.

The general secretary of the Assam Pradesh Congress Committee, Jitendra Singh from Alwar, is also eyeing the treasurer’s chair. Besides, Rajasthan chief minister Ashok Gehlot, Sushil Kumar Shinde and Pawan Bansal have also been confidants of the Gandhi family. Besides, the Gandhis may have in mind other senior leaders for the post.

Adesh Rawal is a freelance journalist.