Ahead of Assembly Polls, Politics of Defection Prevails in Punjab

The fundamental democratic principle of a government 'of the people, by the people and for the people' has been lost among the failing standards of ethical and moral propriety in India’s parliamentary democracy today.

Formers Congress MLAs Fateh Jang Singh Bajwa (fifth from left) and Balwinder Singh Laddi (fourth from left) are only two of the dozens of MLAs who have switched allegiances ahead of the Punjab assembly polls. Photo: PTI.

Chandigarh: In his book Life in the IAS: My Encounters with the Three Lals of Haryana, retired bureaucrat Ram Varma details the story of how the phrase ‘Aya Ram, Gaya Ram‘, frequently used for political defectors, came to be.

In 1967, while Rao Birender Singh and Devi Lal both sought to form the government in Haryana, a cat-and-mouse game was afoot where both sides were trying to lure MLAs away from the other’s camp. Certain MLAs, such as Hira Nand Arya, whose case is detailed in Varma’s book, changed allegiances as many as five times, having the time of their lives as long as the game lasted.

In a speech on a report by the Haryana governor, then home minister Y.B. Chavan told parliament that the price to make an MLA defect lay between Rs 20,000-40,000; a huge some in those days. It is in this context that Gaya Lal, an MLA from the Palwal district, acquired legendary fame.

Gaya Lal deserted Singh’s camp on October 30, 1967, but was persuaded to return within only nine hours.

In this light, Varma wrote, “Rao Birender Singh presented him before the press in Chandigarh saying ‘Gaya Lal is now Aya Ram’. But by the time Chavan made his speech in Parliament, Gaya Ram jumped off and Chavan intoned: ‘Ab To Gaya Lal Bhi Gaya’ and went on to coin the inimitable appellation, ‘Aya Ram, Gaya Ram’ for defectors.” 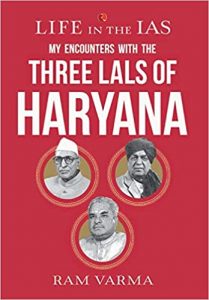 Ram Varma
Life in the IAS: My Encounters with the Three Lals of Haryana
Rupa Publications India, August 23, 2017.

The politics of defection is not new. It is, therefore, not surprising that ahead of the February 20 polls in Punjab, Balwinder Singh Laddi, Congress MLA from Hargobindpur in the Gurdaspur district,  jumped ship to join the BJP, only to return to the Congress six days later.

Laddi was supposedly promised a ticket by chief minister Charanjit Singh Channi but was dealt a rude shock when the Congress’s first list of candidates, released on Saturday, featured a new candidate who would contest from Hargobindpur: Mandeep Singh Rangar Nangal, who is known to be loyal to cabinet minister Tript Rajender Singh Bajwa.

While Laddi initially only hinted that he might switch sides, telling the media that he would consult his supporters, Congress MLA from Moga Harjot Singh Kamal wasted no time in walking into the BJP’s office after he was denied a ticket on Saturday. As the remaining 31 candidates are yet to be announced, the possibility of even more defectors from the Congress cannot be ruled out.

Last month, Aam Aadmi Party (AAP) national convener Arvind Kejriwal told the media that his party would not take kachra (garbage) from the Congress or any other party.

However, in the past few weeks, the AAP not only inducted several Congress and Akali leaders but also fielded them for the upcoming elections. Some of the known Congress faces inducted by the AAP included Sukhjinder Singh Lalli (Majithia), Raman Bahl (Gurdaspur), Joginder Singh Mann (Phagwara), Ranjit Singh Rana (Bloath), Raman Arora (Jalandhar central) and Jagroop Singh Gill (Bathinda Urban).

All these leaders have already been fielded from their respective constituencies, except for Mann, a former Congress minister who was the latest entrant into the AAP, joining on January 15. Mann was the Congress’s candidate from Phagwara in the 2017 polls. This time, he is likely to be the AAP candidate from the same constituency.

Even leaders who have long been associated with the Shiromani Akali Dal (SAD) have joined the AAP in the past few weeks. Prominent among them were former Akali minister Surjit Singh Kohli and his son Ajit Pal Singh Kohli from Patiala and former SAD Mohali mayor and prominent real estate developer Kulwant Singh. Kulwant has already been given a ticket from Mohali.

Sewa Singh Sekhon, a former SAD minister, was another high-profile name to have joined the AAP five months ago. However, he died in October and now his son, Jagrup Singh Sekhwan, is being fielded by the party from Qadian in the Gurdaspur district.

Therefore, despite Kejriwal’s claim to the media last month, the AAP has given approximately 30 tickets for the Punjab elections to defectors from either the Congress or the SAD in the past two years.

As per an Indian Express report, AAP candidates Karambir (Dasuya), Narinder Sawana (Fazilka) and Madan Lal (Ludhiana North) are among those who switched over from the SAD in past two years, while Brahmashankar Zip (Hoshiarpur), Lalit Mohan Pathak (Nawanshehar) and Santoshj Kataria (Balachaur) joined the party after quitting the Congress last year. Kuljit Sigh Sarhal, the AAP candidate from Banga, also came from the SAD in October last year.

The AAP’s decision to induct so many outsiders has brewed discontent within party ranks as well. On January 11, AAP Mohali district youth wing president Gurtej Singh Pannu held a press conference in which he alleged that the party, which has long claimed to be ‘different’ from its political opponents, has given tickets to as many as 56 political leaders. Pannu also took umbrage at the fact that some of these leaders were given tickets within days of their joining the party; an oblique reference to real estate baron Kulwant Singh.

Pannu was later expelled from the party along with three others: Sheera Bhanboura, Morha Singh Anjaan and Shiv Dayal, for raising their voice against tickets being given to people with no commitment to the party’s ideology.

“We had some hope from the AAP but Kejriwal and his aides are ruining everything,” they said.

Freefall of leaders into BJP

The BJP has never been an important political force in Punjab. Since the 1990s, it had remained a junior partner of the SAD, contesting no more than 23 of Punjab’s 117 assembly segments, mostly in urban towns.

This election is different. For the first time, the party is set to contest 70-80 seats since its alliance with the SAD was severed on account of the farm bills issue.

With so many political leaders from the Congress and the SAD joining BJP over the past few weeks, the total numbers have become difficult to keep track of. Manjinder Singh Sirsa, Jagdeep Singh Nakai, Rana Gurmeet Singh Sodhi, Fateh Jang Bajwa and Harjot Singh Kamal were among the known faces inducted into saffron fold in the past few weeks.

Also read: After 26 Years, SAD’s Politics Returns To Its Old Haunt. But Not Everyone Is Happy

Union minister and the BJP’s Punjab in-charge Gajendra Shekhawat was quoted by the Tribune as saying, “The way eminent personalities, elected representatives and influential people from different walks of life are joining the BJP it shows which way the wind is blowing in Punjab.” 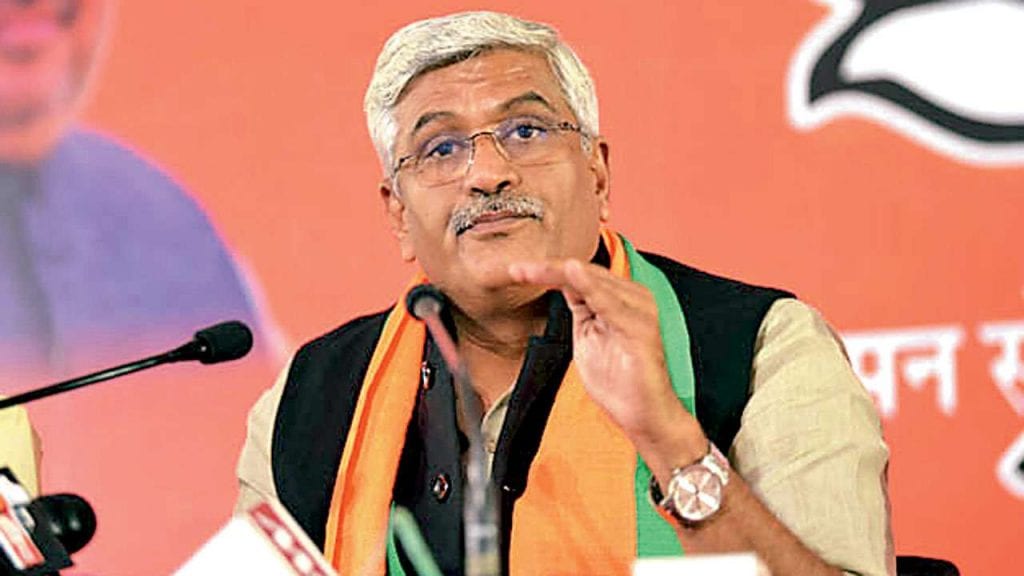 However, if this is a yardstick to assess the political situation, the BJP must be in trouble in Uttar Pradesh where so many MLAs and ministers have left the party in the past few days.

Also read: UP Polls: Third Minister Resigns From Adityanath Cabinet in as Many Days, to Join SP

Jaskirat Singh, Punjab coordinator of Punjab Election Watch, an election watchdog in the state, told The Wire that the entire focus of leaders as well as parties in the current Indian political scenario is only to grab power by any means possible. This is why, he said, there has been no hesitation in inducting anyone from any rival party

He said that all parties came up in the first place because of their ideologies. However, over the years, defectors and the greed for power overshadowed ideological underpinnings in these political parties. “The use of muscle and monetary power has further made sure that they are not questioned by the public for changing loyalties, ” he added.

A report by another election watchdog, the Association for Democratic Reforms (ADR), revealed that BJP has been the major gainer from defections across the country in the past seven years.

The Congress saw 222 candidates – the most among all parties – leave the party during assembly and parliamentary elections held in the last seven years, the September 9, 2021 report noted.

Why do parties entertain turncoats?

As per the ADR report, the principles of democracy rely upon a “government of the people, by the people and for the people” where the “interest of citizens” is of paramount importance, in contrast to the “private interests of our politicians”.

This fundamental principle, however, has been lost among the failing standards of ethical and moral propriety in India’s parliamentary democracy.

The ‘Aaya Ram, Gaya Ram’ syndrome and the never ending hunger for power and money has become common practice amongst parliamentarians and political parties.

The ADR report said that the absence of value-based politics, the lust for money and power, the strong nexus between money and muscle, the reward for office and the dearth of efficient, honest and credible leaders are among the plausible reasons behind such defections.

It also said that the law is also silent on the functioning of political parties. The misuse of powers under Section 321 of the Code of Criminal Procedure (CrPC) (withdrawal from prosecution) against a particular politician and the unimpeded entry of criminals into politics, too, motivates turncoats.

“Until and unless these trends are not reined in, our current electoral and political situation is bound to deteriorate further. The ‘Conduct of Politics’ necessitates fairness, freedom, reliability, equality, integrity, honesty and credibility. It will be a mockery of democracy if we fail to plug these loop-holes because of which such defections, changing/switching of party by MPs and MLAs are happening,” added the report.

“It is high time that our legislators and political parties put an end to the ‘politics of convenience and self gain’ and start practicing ‘politics of conviction, courage and consensus,” the report concluded.