After Article 370, Retrieving PoK Our Next Agenda: Union Minister

He added that the common man in Kashmir is "rejoicing" about the potential benefits of reading down Article 370 of the constitution. 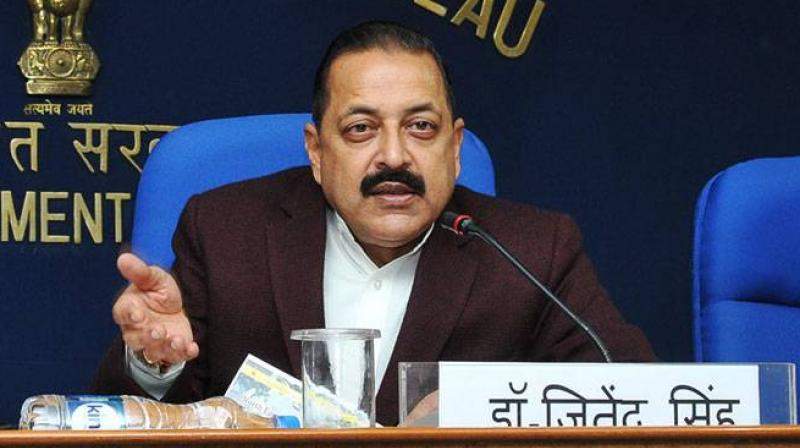 Jammu: Union minister Jitendra Singh said on Tuesday that the biggest achievement during the 100 days of the Modi government’s second term is the scrapping of the special status of Jammu and Kashmir and “our next agenda” is making Pakistan-occupied Kashmir an integral part of India.

“It is not only my or my party’s commitment but a resolve of the unanimous resolution passed by Parliament in 1994 by the then Congress government, headed by P.V. Narsimha Rao. This is an accepted position,” Singh said on the issue of Pakistan-occupied Kashmir.

Replying to a question on the vicious campaign launched by Pakistan on the abrogation of Article 370, the Union minister in the PMO said the world view is aligned with India.

“Some of those countries, which were not agreeing to India’s viewpoint, now follow our view point,” he said, adding the common man in Kashmir is “rejoicing” about the potential benefits.

However, he suggested, a handful of beneficiaries “of this mayhem, which was carried on for all these years, are unhappy.”

Recounting the achievements of Prime Minister Narendra Modi’s second term in its first 100 days, Singh said the abrogation of the article was biggest step in fully integrating Jammu and Kashmir with India. He said India comes first to any other identity.

“The biggest and greatest achievement of 100 days is the abrogation of Article 370,” Singh told reporters here.

“It needed a tremendous amount of will power, conviction and determination,” he added.

“Our next agenda is retrieving PoK” and making it an integral part of India, he asserted.

As part of a nationwide campaign to highlight the 100 days of bold initiatives by the National Democratic Alliance government, Singh said “had (Jana Sangh founder Syama Prasad) Mookerjee been alive, he would have declared ‘go and tell the world that Modi and Amit Shah have abrogated Article 370’.”

“He said it is redemption to the promise of Mookerjee,” he said.

Singh said as far as terrorism is concerned, Pakistan has continued to perpetuate and sponsor terrorism on the soil of India in J&K.

“What is being said in Pakistan by some leaders is being closely followed by the MEA. Their remarks do not carry any weight,” he added.

He said India’s position is of consistency, conviction and candidness.

Singh said there cannot be any premium on the anti-India activities and terrorism.

“Now the time has come, history would decide this… Whether Nehru or Mookerjee was right? The moment of judgement has arrived”.

He said everyone knows who has enjoyed premium by anti-India activism and “they would have to pay the price.”

On the return of Kashmiri Pandits to the Valley, he said, “Once the conditions are conducive, you do not have to make up a plan. They will themselves voluntarily go back as it is vicious to live outside their home land.”

He said that this is going to be the last phase of militancy in Kashmir. After this, he added, not only Kashmiri Pandits but many others will be looking forward to head to the Valley.

On an Amnesty International report on security forces, he said he was sure that concerned agencies are taking cognisance of it.

“There are 101 human rights violations being committed in various states of America. All narcotics are happening from US Government is now in the process of banning electronic cigarettes, which comes from the US. That country, which blames us for rights violations, is benefiting from the trade of it,” he added.