The UP chief minister paid no heed to restrictive measures in place against the coronavirus, presumably in the belief that the public display of his religious agenda could yield political dividends. 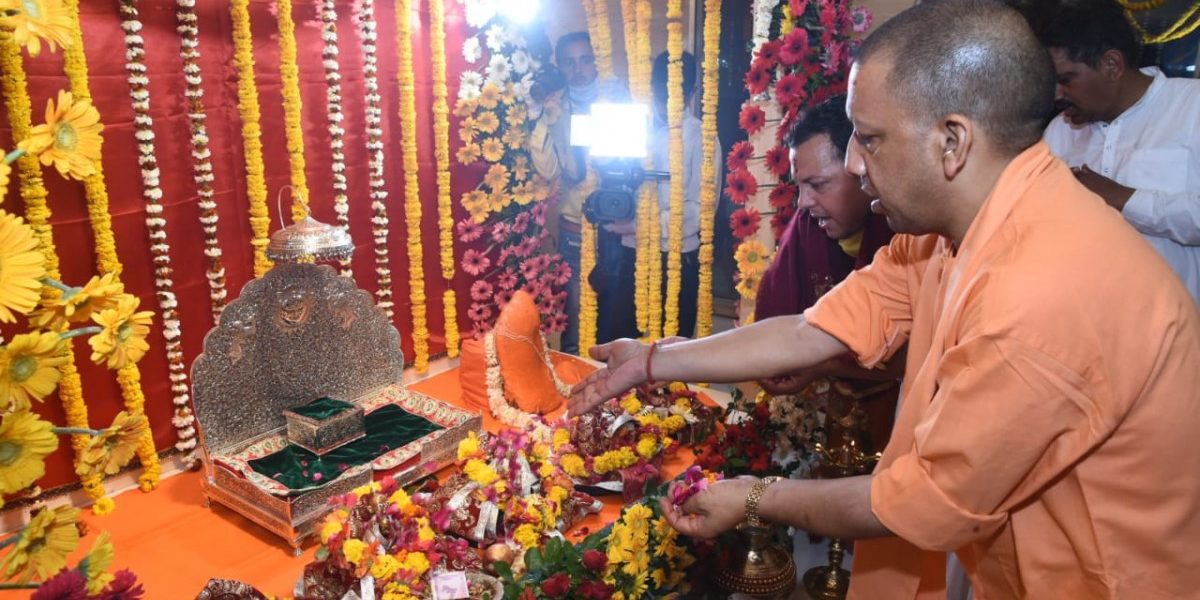 Uttar Pradesh chief minister Adityanath supervising the transfer of the idol of Lord Ram from the makeshift temple at the site where the Babri Masjid was demolished to a temporary location to pave way for the construction of a new temple. Photo: Special Arrangement

Lucknow: The shifting of Lord Ram’s deity from the makeshift temple atop the rubble of the demolished Babri Masjid in Ayodhya to a new wooden structure in the neighbourhood during the early hours of Wednesday is not only a violation of the prime minister’s 21-day nation-wide lockdown on account of the coronavirus but a political act that has ruffled feathers in the ancient temple town.

The action was carried out personally by Uttar Pradesh chief minister Yogi Adityanath. And even though the absence of Ayodhya’s most prominent sadhu, Mahant Nrityagopal Das, from the ceremony is being officially attributed to his indisposition, reports from Ayodhya claim he deliberately kept himself away from the function.

Apart from heading the decades old Ram Janmbhoomi Nyas and facing trial in a CBI court for the crime of conspiring to demolish the Babri Masjid, Nrityagopal Das was also formally appointed chairman of the new Ram Janmbhoomi Teerth Kshetra Trust – constituted by the Union government last month in pursuance of the November 9, 2019 order of the Supreme Court.

The Supreme Court put an end to the legal battle for right over the land where the 16th century Babri Mosque stood until it was demolished by Hindutva activists in December 1992. The Bharatiya Janata Party claims the site marks the birthplace of Ram, and thought the country’s apex court refused to go into that question, it ruled in favour of construction of a Ram temple at the disputed location.

Both in his earlier role as a prominent face in the Ramjanmabhoomi campaign and now in his official capacity, Nrityagopal Das saw himself as a natural custodian of everything that pertains to Ram’s claimed. birthplace and, of course, the proposed Ram temple. And since the shifting of the idols was deemed necessary in order to start construction of the new temple, he considered himself the rightful religious person to carry out the ritual.

While he was not available for comment, sources close to him claimed that he was upset over the fact that this task of shifting of the deity was carried out by Adityanath.

Indeed, Ayodhya on Wednesday was agog with murmurs that even by virtue of being head of a very popular religious (Nath) order in Gorakhpur, Yogi Adityanath was not qualified or entitled to do the job. In any case, a chief minister was not expected to be personally undertaking such a task.

While Nritya Gopal Das remains tight-lipped on he whole issue, his displeasure is being communicated by others.

Mahant Kanhaiya Das, who is head of the Ayodhya Sant Samaj, told this reporter, “We are happy that the shifting of Ram Lalla from a tarpaulin roof to a proper home has been carried out today, but we were hoping that the task would be carried out by one of the local saints.” He added, “We have nothing against [Adityanath]; in fact his guruji, Mahant Avaidyanath, as well as his guru’s guruji, Mahant Digvijaynath, played a major role in the liberation of the Ram Janmbhoomi. Yet, strictly speaking, Yogi Adityanath ji is not a pujari, he is a warrior. And today’s puja should have been ideally performed by a pujari.”

Das felt that “ideally today’s shifting rituals should have been performed by the head of the old Nyas and the new trust, Mahant Nrityagopal Das. I do understand that he is old and infirm and it would not have been possible for him to carry the deity in his arms but least of all, he should have been given a token opportunity to touch it with his hands before the deity was carried to the new wooden structure. He could have also been asked to perform the puja.”

Observers are of the view that perhaps the chief minister chose to carry out the entire exercise himself simply because that afforded him an opportunity to make a public display of his religious agenda in the hope that this could yield political dividends in the long run. No wonder, he did not care to respect the need for social distancing – much emphasised by Prime Minister Narendra Modi in his address to the nation the previous evening – and allowed nearly 100 people to gather for the ritual.