Adityanath Starts Term by Unleashing 'Anti-Romeo Squads' on UP Streets

UP officials and police officers insist that the squads are for protecting women from harassment and not to impose moral policing. 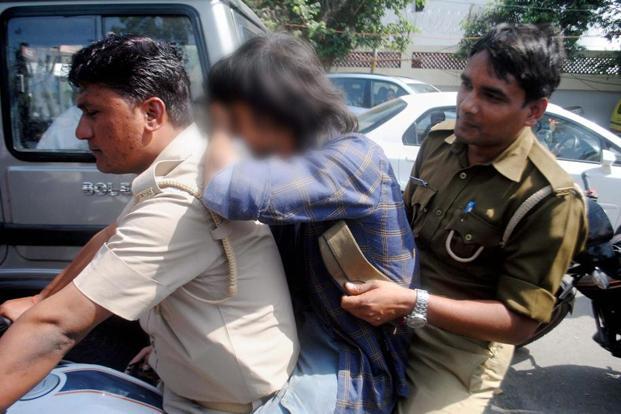 UP policemen who are part of an anti-Romeo squad with an alleged ‘eve-teaser’. Credit: PTI

Lucknow: From Gorakhpur to Meerut, “anti-Romeo” squads of policemen today fanned out across Uttar Pradesh on the orders of new chief minister Yogi Adityanath, fulfilling the BJP’s pre-poll pledge to check eve-teasing.

But the police campaign aimed at ensuring safety of women, especially young girls, was reportedly marked by some stray cases of harassment of innocent youths amid concerns that it could spawn moral policing.

Special squads comprising cops from local police stations kept a vigil at markets, malls, schools, colleges, coaching centres, parks and other crowded places to see if women were being harassed.

The squad detained five persons in Pilibhit today, UP police said in Lucknow. At a few places in the state, some youths were made to do sit-ups at busy crossings while holding their ears and made to pledge that they wouldn’t indulge in eve-teasing.

“The idea is that there should not be any harassment to women,” Senior SP Barabanki, Vaibhav Krishna said, making it clear that it should not be construed as moral policing amid suggestions that the way the squads function blurs the line between crime control and moral policing.

“Safety of girls/ladies is the sole intent of the anti-Romeo squads. No moral policing,” UP director general of police Javed Ahmed tweeted.

According to the inspector general of police, Meerut zone, Ajay Anand, the squads have been formed on the directives of chief minister Adityanath, who was sworn in on Sunday.

“Superintendents of Police of all 11 districts under Lucknow zone have been instructed to constitute squads to be deployed at vulnerable points,” inspector general Lucknow Zone, A. Satish Ganesh said.

The squads will also check the consumption of liquor at public places as it often leads to instances of eve-teasing, he said.

Since the commencement of the squad’s functioning, the police detained five youths, quizzed 934 others and checked 176 spots in various parts of the city yesterday when the drive was launched.

Superintendent of Police (Lucknow East) Shivram Yadav said that in Lucknow, 23 anti-Romeo squads have been formed.

Each squad consists of a sub-inspector and four constables (which include two women constables as well).

The members of the squad are deployed in both plain clothes and uniform.

Giving details of the type of action which could be initiated against roadside Romeos, Yadav said, “If a woman is not registering any police complaint, then the eve-teaser may be let off after counselling. If the eve-teaser is below 18 years of age, then the Juvenile Act would be applicable.”

But, if the eve-teaser is above 18, then the person would be tried as per the provisions of the Indian Penal Code and POCSO (in case the victim is a minor).

Anand said the squads will conduct ‘Operation Romeo’ outside colleges and their functioning will be monitored by the city’s superintendent of police.

While campaigning in the state, BJP president Amit Shah had said that the party, if voted to power, would form anti-Romeo squads to check eve-teasing.

In Meerut, some boys reportedly involved in eve teasing near schools, colleges, cigarette stalls, pan shops and even pastry shops were picked up for questioning and were only allowed to go after police called their parents to inform them about their children’s activities.

Meerut’s superintendent Alok Priyadarshi denied charges of harassment. “The only job (of the squads) is to ensure safety of women and to ensure that eve-teasing does not take place,” he said

Police explained that the modus operandi of the squads will be similar to the infamous ‘Operation Majnu’ in 2005, in which boys at crossings and markets were pulled up and some couples were roughed up.

The BJP Lok Kalyan Sankalp Patra (manifesto), which the party released ahead of the UP assembly elections, categorically mentioned that such squads would be formed to stop instances of eve-teasing.

Apart from this, the text also said three women police stations would be established in every district of Uttar Pradesh.

The idea of “anti-Romeo” squads was first implemented in Gujarat in the late 1990s when the BJP was in power but the campaign later fizzled out in a short span of time.

“Initially such squads were formed in the late 1990s but by 2002-03 the campaign fizzled out as such complaints of eve-teasing were less in Gujarat and there were staff problems also,” said officials in Ahmedabad.

Police said that though there are no specific anti-Romeo squads in Gujarat with dedicated staff currently, police patrols outside schools and colleges and public places continue.

The Surat police had recently even issued a notification barring men from aimlessly sitting within 50 metres of schools and colleges.