Acquitted After 12 Years in Jail, Kashmiri Student Wants To Go Back To His Books

“What was done to me should not happen to anyone... The years that I have lost in prison will not return now.” 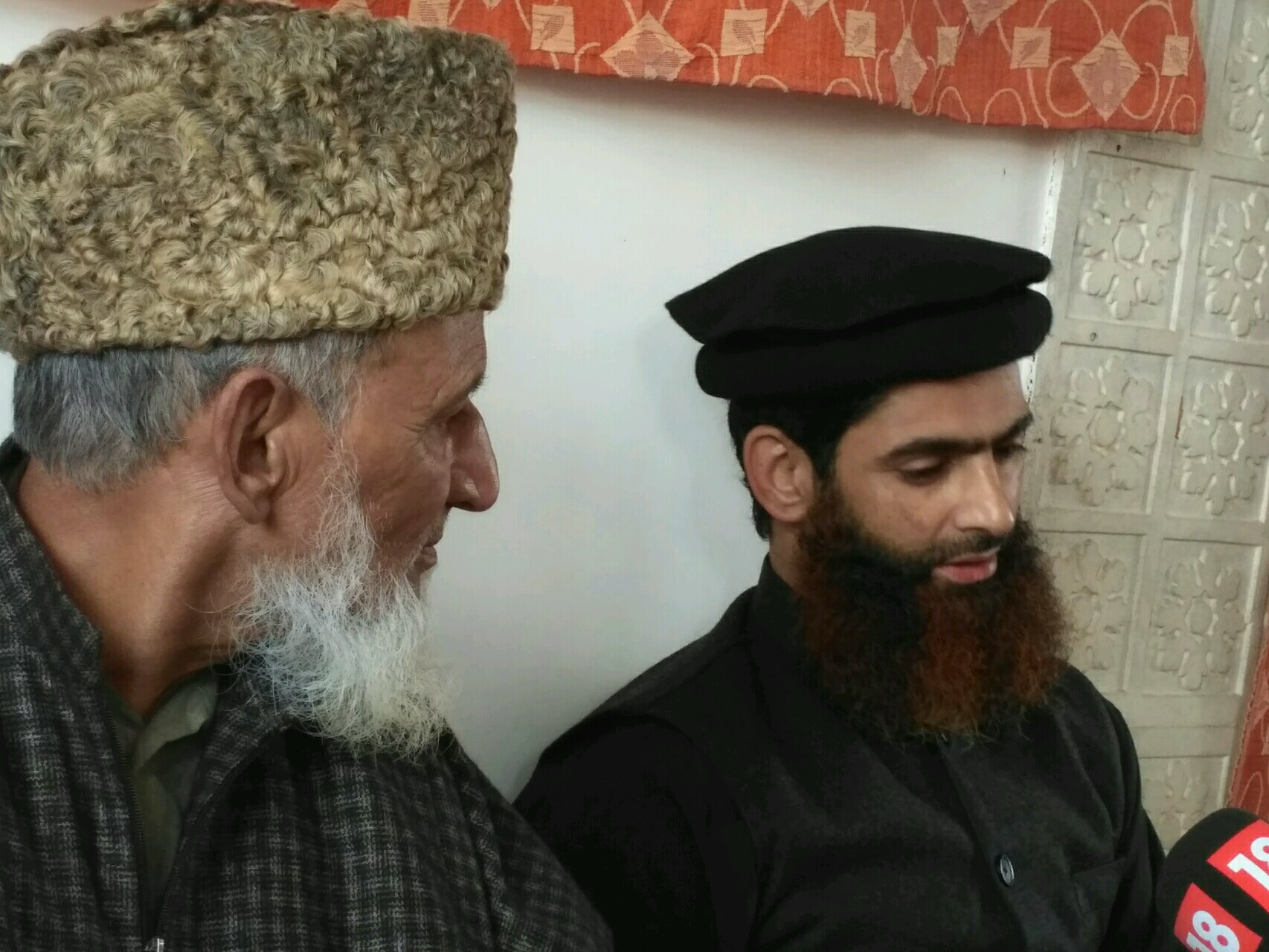 Muhammad Rafiq Shah (right), back at home after 12 years following his acquittal in the 2005 blast case, seen her with his father, Mohammaed Yaseen. Credit: Majod Maqbool

Srinagar: The books stayed open for a while, before Muhammad Rafiq Shah’s parents picked them and put them back on the bookshelves. He was studying when the police picked him up from his house, on the outskirts of Srinagar, one cold October night in 2005.

“I would like to resume my studies and apply for a PhD,” he says. “Many of my friends and classmates went on to complete their PhDs and got jobs while I was in jail,” he adds.

On February 16, Shah was acquitted by a Delhi court after being imprisoned in Delhi’s Tihar Jail for 12 years over a 2005 bomb blast case. On Tuesday night, after he returned to his parents, he slept in the same room from where he had been picked up by the police – which his grieving parents kept locked after his arrest.

Shah, then an MA final year student in Kashmir University’s Islamic Studies department, was preparing for his final term examinations when he was taken into custody.

Before his arrest, he stresses that he was like any other Kashmiri student, studying and thinking about Kashmir. “Whenever there were atrocities on the people here, we would naturally raise our voices and protest peacefully on campus,” he says. “A few times in 2005, the police came to my house to check my antecedents,” he recalls.

Back home now in Shuhama, outside Srinagar, he sits with his aged father by his side. Relatives and friends stream in, hugging the man they knew as a boy. Reporters ask him long questions, seeking details about the 12 years in custody. His answers are brief; sometimes philosophical. Often, he answers a query with an Urdu couplet. 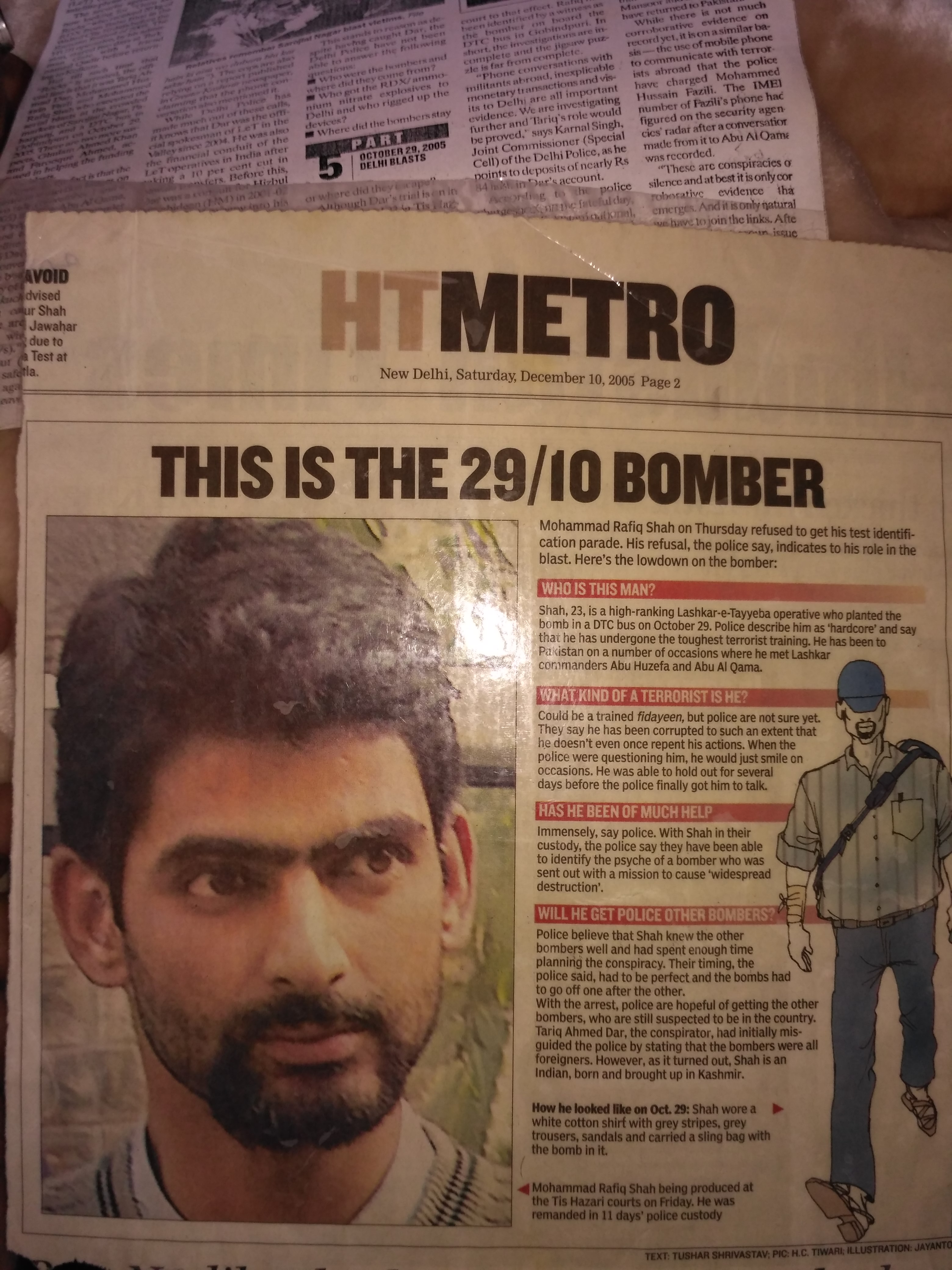 Shah has maintained a file which contains his case documents, his final acquittal order and newspaper clippings of stories about his arrest and his alleged involvement in the Delhi blasts. A newspaper report of December 10, 2005, is headlined in capital letters: “THIS IS THE 29/10 BOMBER”. The report, published in the Hindustan Times, describes Shah as a “high ranking Lashkar-e-Tayeba operative who planted a bomb in a DTC bus on October 29.” A graphic illustration accompanies the report. “Shah wore a white cotton shirt with grey stripes, grey trousers, sandals and carried a sling bag with the bomb in it,” it says.

While acquitting Shah and another accused, Mohammad Hussain Fazili, the Delhi court said that the prosecution had “miserably” failed to prove that Shah was involved in the planting of bombs.

“What was done to me should not happen to anyone,” Shah says. “The 12 years that I have lost in prison will not return now.”

Shah was kept in various police lockups in Delhi after his arrest. He adds that he was severely tortured for over a month before being shifted to a high-security ward in Tihar Jail. “The examination of witnesses took a long time, sometime months and years, and every time I would return to the jail and wait for the next hearing.”

His parents would lock their home and travel to Delhi every two or three months to meet their only son. “Only we know how much we suffered and grieved all these 12 years,” his father, Mohammed Yaseen, says. “But we had faith in god and we knew that he was innocent.”

Shah’s mother went through complicated surgery and was often ill. Yaseen adds that she would often be ill, weeping, grieving – and waiting for her son’s release.

His parents’ grief, Shah stresses, is what he regrets the most when he thinks about the years in jail. “The time I lost in the prison… And my Abu and Ami…I regret the pain they went through all these years.”

Does he have any expectations from the government? He doesn’t want compensation, he adds. “No one can bring back the 12 years of my life that were lost in prison,” he replies. “There is a system is place, but it’s not a justice system. Justice delayed is justice denied.”

While in jail and in between court hearings, Shah earned his MA degree in Islamic Studies. He was shifted to Srinagar’s central jail in 2010 to appear for the final exams.

What does he want to do now?

Study some more, to begin with, he replies. “And I want to work for humanity.”