Accusations of Police Complicity in Aftermath of Ballabhgarh Communal Violence

At least two victims confirmed that the police withdrew itself for two hours once the attack started. “The police had been in the village for many days. But that evening none of them could be seen," said one. 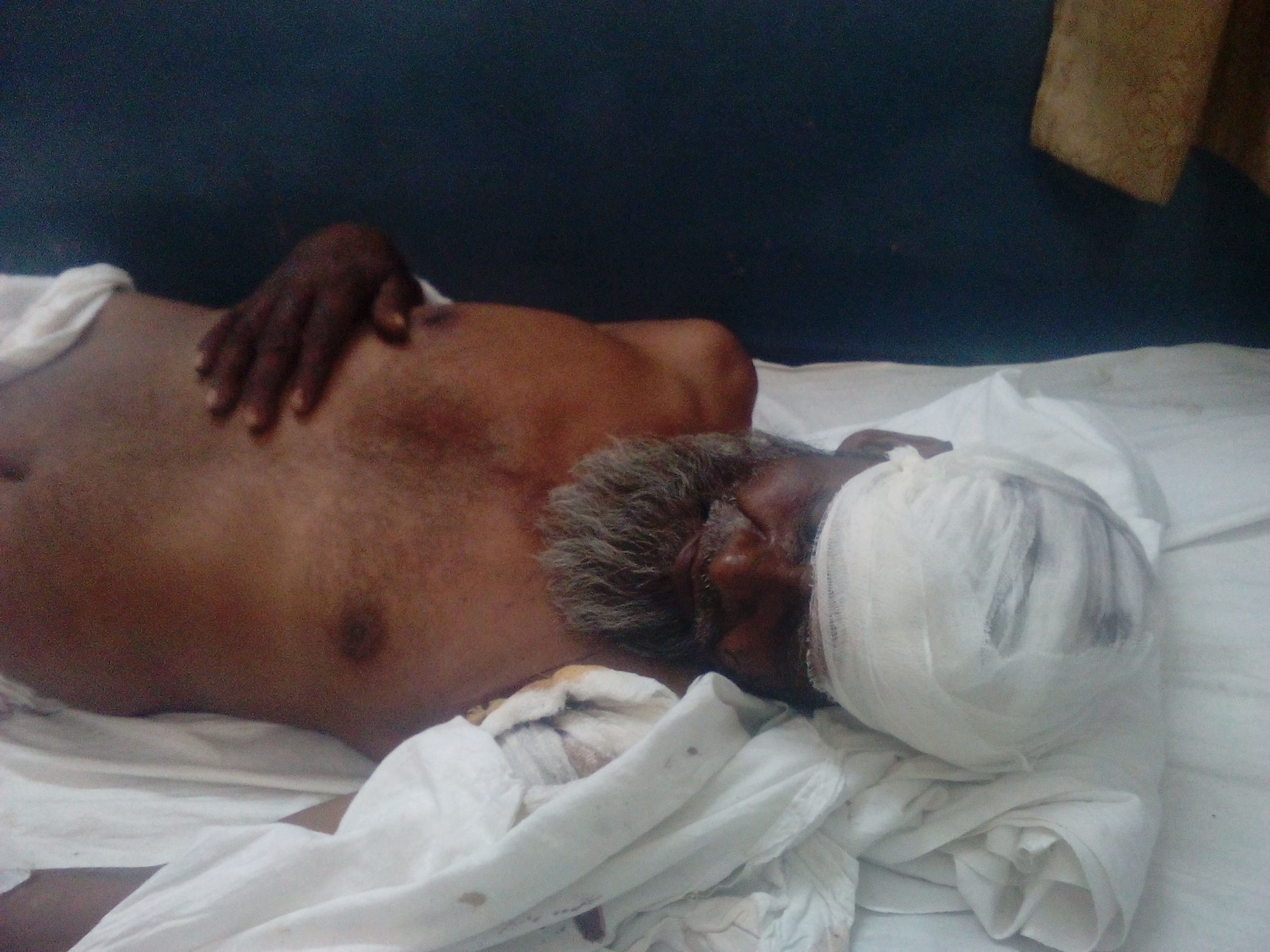 Hasnu Khan, one of the Muslim residents of Atali village injured in a communal attack on 25 May, lies in his hospital bed in Ballabhgarh. Credit: Jyotsna Singh

Atali (Haryana): Hasnu Khan, 60, is lying in Badshah Khan Government Hospital of Faridabad district of Haryana, with a broken arm and multiple cuts inflicted by axes all over his body. He is out of danger now and “all his vitals are stable,” says Dr Suresh Chander, principle medical officer of the hospital, but he will have to live with deep scars on his body and soul. Khan’s crime: he cared for his buffaloes.

One of the four buffaloes his family owned was burnt in the gruesome attack which took place on Muslim residents of Atali village, Faridabad in the evening of 25 May. Five of his family members fled the village to save their lives. Khan refused to go; he wanted to care for a buffalo that had suffered burns.

“Papa said he would put coconut oil on her wounds for her to heal fast. He thought no one would hurt an elderly man of his age,” said Kamruddin Khan, 27, the youngest of Hasnu’s three sons.

But Hasnu was wrong. He took his cattle out for grazing on the morning of May 27. While returning, he was attacked with axes by four youths aged 14-16 years. Hasnu recognised two of them as Hindu “kids from the neighbourhood.”

Hasnu was left bleeding in a canal flowing next to Atali. His elder son, who came looking for him an hour later, found him unconscious and sought help from the police camping in the village. He was taken to BK Hospital. His patient file shows six lacerations – wounds caused by sharp objects – including one deep gash on his head.

Hasnu is among the three patients still at the hospital following the communal violence in Atali. In all, the hospital received 21 patients – 20 Muslims and one Hindu. Ballabhgarh civil hospital received 14 patients, out of which it referred seven to BK hospital. Thus, at least 28 villagers sustained injuries serious enough to warrant being taken to hospital.

Hasnu’s family members are now among the 250-odd Muslims who are staying in the Ballabhgarh city police station. Most of them were brought to the station on Monday evening in police buses. Others are staying with relatives in nearby areas.

“I am here in the police station with my husband and his family. Our five children and young female family members are staying at a relative’s in Kheri village,” said Meena, 30. Her house was set on fire and its ceiling smashed by the mob that attacked the Muslim locality at around 5.30 pm on the 25th. Five women and 10 children including those from neighbouring houses locked themselves up in a small room. The wooden door was broken by young men who beat them up with sticks and bricks. “We kept pleading for mercy and ran around for an hour before the police arrived and took us out,” Meena said.

The state administration says that it is now making attempts to cool temperatures.

“We are talking to the Hindus to let the Muslims return. Till the time their houses are cleaned and reconstructed, we can arrange for them to stay in the government school,” said Gajender Kumar, assistant commissioner of police, Ballabhgarh. The police took two buses carrying people who fled Atali to the village on Tuesday evening to explore the possibility of their return. But many of the Hindus there hurled abuses at them and made violent gestures.

Meena said she does not want to return to the village. “We are very scared. We want compensation and an alternate locality to live. We want police which does not belong to Faridabad, to provide us with safety. The current administration has not been able to help us.”

The administration does not have exact figures, but according to Subhash Yadav, Commissioner of Police, Faridabad, Atali has 1100-1200 Muslim residents. “Most of them have fled, but some are still in the village looking after cattle, though their numbers are not confirmed,” he said. Md. Jamaluddin, president of Minority Welfare Foundation, Faridabad chapter, said that at least 15-20 Muslims are still in the village. “Today the entire heap of cattle feed was burnt down. Since then the people who stayed back are calling us to help them leave the village,” he said.

At the root of the violence is an unfinished mosque situated on a piece of land in the village.

“In earlier times this land used to be a kabristan, or burial ground. With the expansion of human habitation, the graveyard was shifted outside the village. In 1971, the land was allotted to Wakf Board. Muslims had  by then started offering namaz at the location and had a small structure too,” Yadav said. Atali’s unfinished mosque, where the attackers first appeared on 25 May. Credit: Jyotsna Singh

In 2009, an individual from the village filed a case in the Faridabad district court claiming that the land belongs to village panchayat. In 2010, the court put a stay on the mosque’s construction. Muslim villagers approached the panchayat and in the presence of village elders and with the signature of at least 50 of them, the land was given to the Muslims. Later the court case was also taken back.

“In the records of the revenue department, the land belongs to Wakf Board,” said Yadav.

Recently, another individual from the village moved the office of the sub-divisional magistrate to give the land to the village panchayat. Earlier this month, that case was dismissed.

Against the backdrop of a land dispute which appeared to have been settled, construction of mosque began last Friday under police presence.

Two days before that, as the preparations for construction started, a group of Hindus and Muslims had thrown stones at each other. “There was a minor exchange of harsh words in the Muslim locality. Muslims women started fighting with Hindu men and threw stones. In retaliation, we also threw bricks on them,” said a Hindu resident of the village on condition of anonymity. She said fighting stopped after an hour only when the police intervened.

The mosque’s construction then began, and continued till Monday under police protection.

“On Monday morning, men from the village came and said mockingly, ‘We will ‘construct’ your mosque this evening.’ We got scared, but the police convinced us we were safe,” said Samina, 30.

But around 5.30 p.m., a mob of a hundred men came with sharp knives, axes and petrol, said Naimuddin, admitted in BK Hospital with severe burn injuries. A resident of Badkhal in Faridabad, he was working at the mosque on the unfortunate day.

“We had heard rumours of an impending attack, so I stopped work at 4.00 pm. We were going to offer namaz at Shakir Ali’s house when the mob came. I was locked in a bathroom for 45 minutes. Later as I ran out, I saw attackers approaching me from three directions. I ran in the fourth direction into a house which was on fire. I had no choice but to get burnt.”

Naimuddin said, “I heard some of the attackers saying that they had two hours and everything had to be done within that time.”

At least two victims at the PS confirmed that the police withdrew itself for two hours once the attack started. Not wishing to be named, one of them said, “The police had been in the village for many days. But that evening none of them could be seen. I tried calling the SHO several times but his phone was switched off. We also called the landline, but no one picked up the phone.”

The general feeling among the Muslims camping in Ballabhgarh is that the police were hand in gloves with the attackers. “We want the role of the police be investigated,” said a victim who asked that his name not be used.

Victims allege that the police has still not recorded their statements. Two injured persons admitted in BK hospital are waiting for the police to take their statements. “Both of them have been fit to give statements since Tuesday morning, when they were brought to the hospital,” said Dr. Chander.

Janhastakshep, a voluntary organisation which sent a team to investigate, has also demanded a judicial enquiry into the incident.

“We demand that proper compensation and security be ensured to the victims. Central force should be deployed to instil confidence among the victims,” said Anil Dubey, a member of the team.

He also alleged that one attacker was detained by the police but released in the face of pressure from local Hindus.

A police officer confirmed this. “We have been conducting raids since Monday night. On Wednesday morning we arrested one person. But he had to be released as the Hindus from the village created pressure and said that the situation will not be normalised if he continues to be in custody,” the officer said, requesting that he not be identified.

On Wednesday evening, village elders met with government officials. Administration sources said the meeting was inconclusive but that temperatures were lower.

Meanwhile Hasnu said he does not want to return to village, though he wants to give the names of the attackers he recognised. He is waiting for the police to record his statement. But like the others, he too might have to keep waiting. A burnt tractor recovered from near the Atali mosque. Credit: Jyotsna Singh