Ankit Roy, an ABVP candidate in the upcoming students' union elections, was "found to be involved in hitting" Ahmed by a proctorial inquiry. 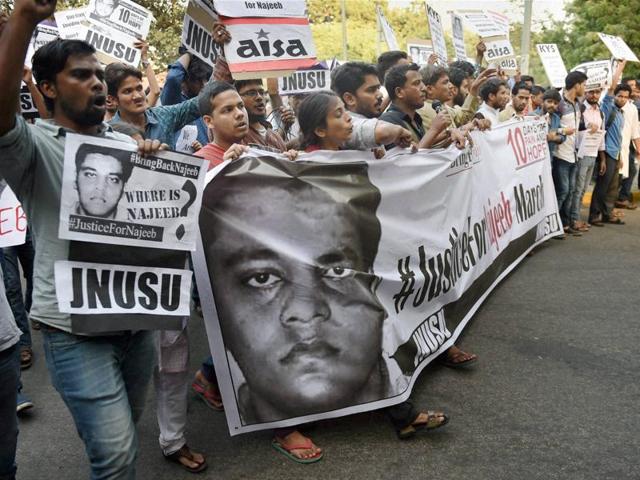 Members of JNUSU and other students' organisations shout slogans during a protest march over missing of student Najeeb Ahmed. Credit: PTI/Files

New Delhi: The Akhil Bharatiya Vidyarthi Parishad (ABVP), the students’ wing of the BJP, has reportedly fielded one of the people accused of beating up disappeared student Najeeb Ahmed last year in the Jawaharlal Nehru University Students’ Union (JNUSU) elections. Ankit Roy, one of ABVP’s five candidates for the post of councillor from the School of Language, Literature and Cultural Studies, was “found to be involved in hitting” Ahmed by a proctorial inquiry, Telegraph reported.

Roy and three other ABVP students were made to change hostels after the inquiry, which many had said was inadequate punishment.

According to the Lyngdoh Committee recommendations on student elections, nobody facing disciplinary action is allowed to contest in the elections. However, the election committee in JNU told Telegraph that they are unable to disqualify Roy because the chief proctor’s office is not sharing the inquiry report with them. “If he was found guilty, his nomination stands cancelled…. We have asked for a copy of the order from the proctor’s office, but they have denied us that information. The chief proctor is not cooperating with the JNUSU election committee. I told her about the situation and she simply told her staff not to give any information to us. The dean of students says he can’t interfere in these matters,” JNUSU’s chief election commissioner Bhagat Singh told the newspaper. “The student has also refused to share the order in which such punishment had been given,” he added.

While the chief proctor denied that she had received any such request, she also said that she would not comply with it unless it came from the vice chancellor. “I have not received any letter from the election committee. In any case, I am not answerable to the election committee. They must approach the DoS (dean of students). I cannot release any information about a student without an order from the vice-chancellor,” she told Telegraph.

Students from other parties have expressed their displeasure at the ABVP’s decision and the university’s silence on it. “He was found guilty by the proctor’s board of assaulting Najeeb before his disappearance. Lyngdoh guidelines bar any student, who has been found guilty by the university authorities, from contesting elections,” Umar Khalid, associated with the Bhagat Singh Ambedkar Students Organisation, told Indian Express.

‘Left unity’ alliance’s presidential candidate told the newspaper that the ABVP was emboldened enough to field Roy because the vice chancellor was “shielding” those who assaulted Ahmed.

The ABVP, however, maintains that Roy was not found guilty of anything. “Ankit has not been found guilty of any assault. Hostel change was done for maintaining peace and harmony,” Saurabh Sharma, from the ABVP’s campaign committee, told Indian Express.