With AAP Victory in Delhi, a Unique Form of Political Awareness Solidifies in India

Not only is AAP's narrative post-ideological, by subscribing to it people have shown that they can distinguish between centre and state. Recording a turnout of 62.59% on February 8, Delhi’s voters have made their decision. The poll results indicate a thumping win for Aam Aadmi Party (AAP), which already looks likely to win 62 seats, while the BJP is leading in single digits.

One is that of an ideological-heavy position of Hindutva underlining a deeply divisive politics of communal hate (against Muslims) and creation of new targets to polarise voters. This was observed in BJP’s electoral campaign, led by Amit Shah and others, who continued to constantly vilify Muslims and those protesting and present in Shaheen Bagh.

The other attempted to offer an alternative, ‘post-ideological’ narrative, with a reliance on a civic-focused agenda reflecting the goods of past performance, and offering a manifesto for the future course of development in the state. This was seen in AAP’s campaign under Arvind Kejriwal’s leadership, reflecting the emergence of a new centrist form of progressive politics. A form of centrism that builds upon a new politics of infrastructure, in an otherwise polarised electoral landscape.

Interpreting the poll results now, one can say AAP’s projected political imagination has won this contest, and that too with a handsome margin.

What can one make out of this victory? And how does this reflect the emergence of new competitive form of federalism from a politics of infrastructure in India? There are two critical points to observe in response to these questions.

On voter’s split voting preference in states and national elections

For some time now, from Haryana to Maharashtra, to now Delhi, with one state-election after another, it is being observed how the average Indian voter has instituted a split-ticket voting preference where (s)he exercises her or his enfranchisement to vote while differentiating on parties and candidates when it comes to states and national elections.

A rhetorical agenda relying extensively on national security and anti-Pakistan slogans, may perhaps get people mobilised enough to vote for a party like BJP during national elections. In absence of a credible presidential-style alternative to Narendra Modi, Modi’s BJP can continue to consolidate and command popular support.

Also read: Another Landslide Victory for AAP in Delhi

However, the same politics of creating new targets for polarisation or banking on national issues, including laws, passed by the Union parliament (reading down of Article 370, or passing the Citizenship Amendment Act) can have a very little say in influencing voter preferences in state or local elections. It is also clear that within the BJP’s own vote-share, there seems to be a divergent electoral preference for a Modi-vote and a BJP-vote.

The former can consolidate votes in the Lok Sabha elections and the latter is far more volatile and fluid, given the results of recent state elections which BJP lost.

In its 2020 Delhi campaign, AAP practiced a centrist politics of infrastructure, seeking votes in name of schools, clinics, jobs, electricity, affordable housing, etc. than succumb to any “rhetoric of revolution, glory and sacrifice”. There were multiple occasions where Kejriwal, ignoring the direct attacks made on him, continued to challenge the BJP leadership to field candidates (including home minister Amit Shah himself) for an open-debate on discussing Delhi’s local issues and not on national problems.

A strategy to focus on local issues and ask people to vote on governance (as against their ideological positionings) seem to have worked reasonably well.

This was seen in Haryana and Jharkhand too, where, a huge chunk of BJP’s Lok Sabha vote-share ended up voting for local parties, expressing resentment on the high state-level unemployment, poor performing local industries, land issues (in tribal areas of Jharkhand) and overall state of governance.

The urban poor of Delhi prefers to care much about her or his own self-interest, for basic public goods and services than stretch her or his self-imagination to resonate with any other ideals (say, of a nation, religion etc.) projected by a political party.

The Delhi voter may thus be less influenced by hierarchies of caste, class or by hatred against a given group, and more with what can help him or her address day-to-day issues with relative ease. So, women’s safety, affordable housing, free electricity and water will be valued more than anything else. Municipal concerns of waste accumulation and others carry more weight.

It is also interesting to perceive how, in urban environments (such as in Delhi), voters may be less inclined in pursuing (or talking about) politics as a vocation in majority, but rather see political processes in context of to a temporal, time-bound discourse (during elections) to assess the performance of one party, and stay vigilant enough to vote for a party (or candidate) that promises ‘ease of living’ than demand street-fights, revolution or communal hatred.

Modi’s BJP may still be the dominant political party at the Union level, and with no credible national opposition nor candidate to stand up to him, the party may continue to hold on its hegemonic presence for some years to come.

Still, quite intriguingly, regional parties at the level of states have stood up to defeat the BJP in most of the recent state-level elections. The party lost Madhya Pradesh, Rajasthan, Chattisgarh, Jharkhand, and failed to get an absolute majority in states of Haryana, Maharashtra (giving way to a Shiv Sena-Congress-NCP coalition there).

The national dominance of the BJP and Modi’s own popularity and presence hasn’t trickled down much to the state-level and this, in a polarising scenario and an environment of mistrust or fractures between the state and Centre, can surface all kinds of issues in implementation of Union laws (some state assemblies have already passed a resolution to not implement CAA) and its policies. It says a lot about the changing dynamics of the existing federal power structure.

The past few years have witnessed a fundamental restructuring of the federal power structure between the Union and states under the Modi-Shah administration. A greater control exercised by the Centre on autonomous public institutions, in almost coercively introducing laws for national implementation, and in powers of financial autonomy and devolution of funds to the state (in a post GST scenario), can be attributed to a cause to establish a centralised nation-state that depends on the power of a strong Centre (or doesn’t see itself as a Union of states) and is governed under a supreme leader.

The focus has been much to reduce the agency or discretional political and financial autonomy of states. 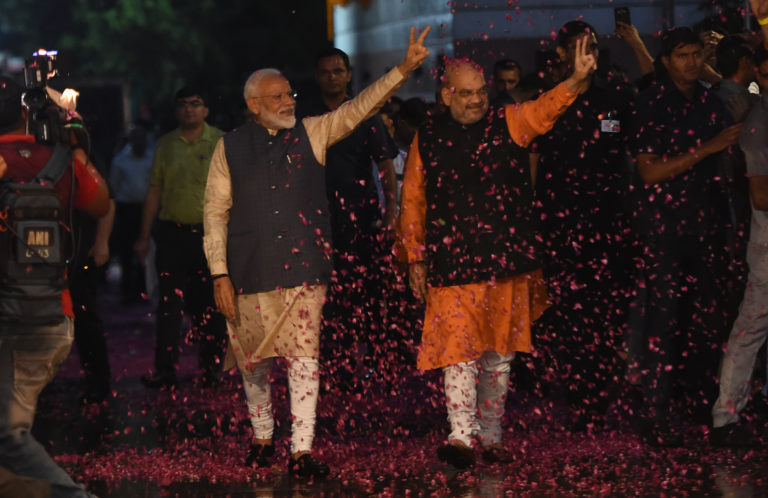 While the recent people-led protest movements across the country against the NPR-NRC-CAA have attempted to rekindle the basic spirit of the Indian constitution and restore faith in fundamentals of the constitution’s basic structure, it is important to understand how a dominant narrative of centralisation could best be countered through a cohesive demonstration of a vibrant federal republic culture, where states and people at a local-level continue to stand up and fight processes of centralism (even if institutionalised or legitimised from the top).

Centralisation, and reduction of democratic agency is in fact leading to further de-centralisation and democratisation of preferences.

As a result, the political layering of power structures at the national, state, and local levels in the current scheme of things, and with AAP’s win in Delhi, may seem to have taken us to find a differentiated voter mindset in the Indian citizenry, which, shall continue to vote differently for each party and candidate in different electoral battles and prefers to have multiple layers of parties involved in a competitive federal power structure.

This preference to have a competitive federal base in its link with changing electoral preferences must therefore be understood as a collective resistance to centralisation of political agency and executive action, providing a new face for a vibrant federal spirit to emerge.

In assembly battles, a greater weight of importance is attributed to state level parties and their local politics of infrastructure, while in a national scenario, the Centre command may at best be able to rally around issues of national security, immigration, etc. for seeking votes in the General Election.