AAP Has Successfully Forged a Model for Regional Forces to Emulate

The phenomenal ingenuity of AAP has firmly put in place politics of honest hard work on behalf of the citizenry without turning away from bold social welfare measures.

Months after the Bharatiya Janata Party rode to electoral victory in the 2014 Lok Sabha polls, a fledgeling new activist outfit, christened the Aam Aadmi Party, won the Delhi state assembly elections with an aplomb that was rare in modern Indian electoral history – 67 of 70 seats.

Who would have thought that in the aftermath of the second Modi triumph at the Centre five years later, the 2020 Delhi assembly elections would offer such a déjà vu moment? And how: After all the blood and gore that came with the rightwing assault by Hindutva, AAP, the band of merry and undeterred Ninjas, has once again trounced the so-nationalist nose, garnering an astounding 62 out of 70 seats.

That this has been demonstrably the result of a sweet quotidian compact between a truly people’s party and the people at large must bode very well for those pundits whose cynical knowledgeability often gets the better of their faith in a truly democratic politics. As indeed it bodes well for the republic at large.

Also read: Why Kejriwal Shouldn’t Be Criticised for Not Running an Ideological Campaign

My takeaway from the happening is best stated in the words of a citizen who spoke to Anjali Aitwal at NDTV:

“The results have proved that true nationalists are not those who refused to fly the tricolour at Nagpur for fifty-two years and who call people –including a Kejriwal – ‘terrorists’ at the drop of a hat; true nationalists are those who work to alleviate ordinary citizens’ real and concrete needs without favour or discrimination.”

Golden words that politicians and their followers might truly hold close to their hearts.

Accused of  dispensing “freebees”, yet another AAP voter spoke thus on behalf of the accused AAP government – what you see as “freebees” are social welfare measures that any caring  government owes to the hard-working mass who produce wealth for the polity and the state, underscoring cannily that Delhi still remains only the second state with a surplus of revenues in the country – testimony to “good governance”.

As to the no-holds-barred calumny against Shaheen Bagh, that the AAP candidate from the Okhla constituency, which Shaheen Bagh is a part of, has won with the largest margin of any – a whopping  71,000 votes – is telling. Considering that, in this constituency of a lakh and ten thousand voters, only 45,000 are Muslims, it is a so salutary conclusion that the defeat of the Hindutva campaign has come indeed from Hindus themselves.

A circumstance that emphatically underlines the reality that Shaheen Bagh has never been a “Muslim” event but a grand coming together of citizens from all denominations and persuasions – a fact anathema to the Hindutva propagandists who left no gruesome stone unturned to project Shaheen Bagh as a “conspiracy” mounted by the usual suspects within the country.

Also read: After Election Losses, Sangh’s Hindutva Pitch Will Be Even Louder and Sharper

The secularism at Shaheen Bagh has thus been as self-evident and sentient as AAP’s refusal to make any strident protestations of its own commitment to secularism. That a visit to the Hanuman temple can be a normal aspect of that point of view has been another calming rebuff to those who tend to claim suzerainty over the Hindu faith. Indeed, nothing could be more telling about this than the statement made by the RSS ideologue, Bhayyaji Joshi, who said that opposing the BJP was not tantamount to opposing Hinduism. 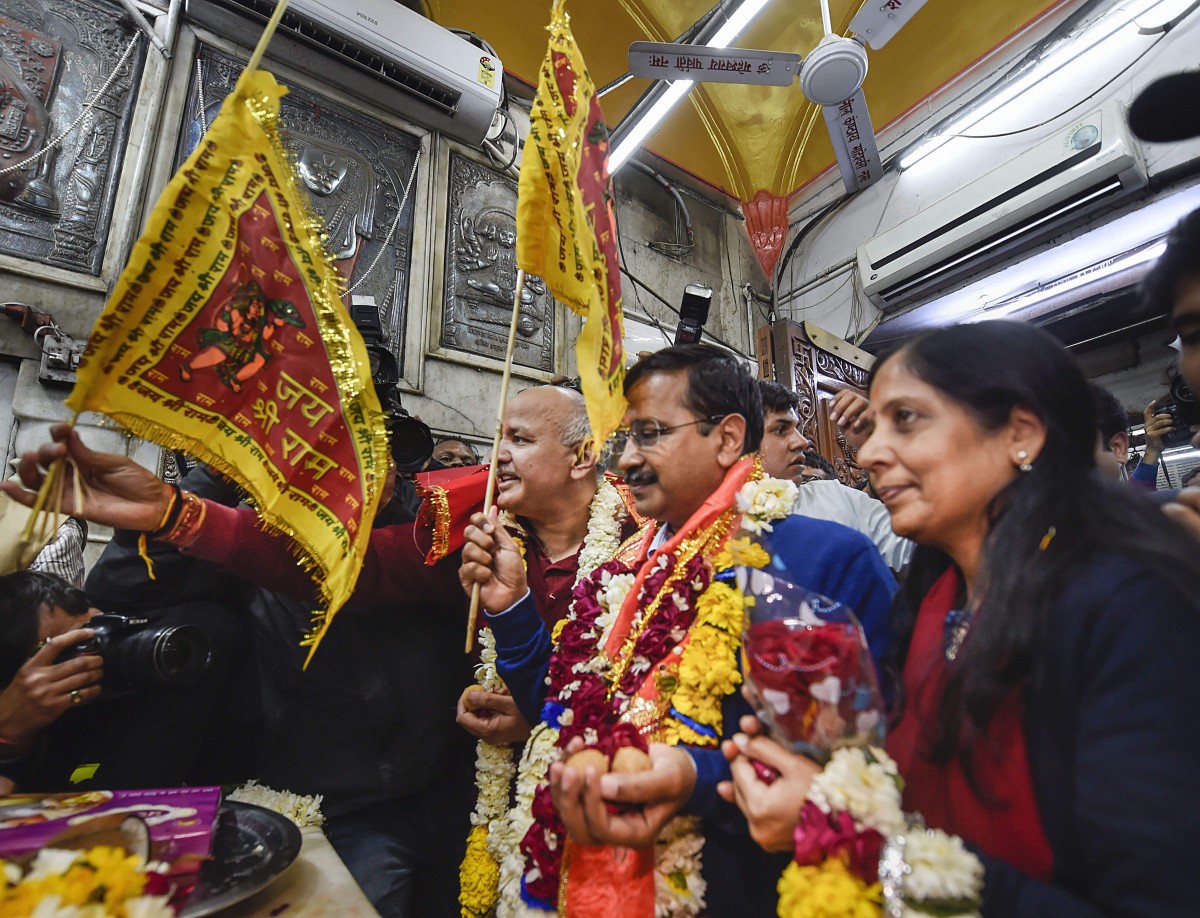 Arvind Kejriwal, his wife Sunita and Manish Sisodia at a Hanuman temple after winning the Delhi elections on Tuesday. Photo: PTI

Wherever one interacted with ordinary voters at nukkads and street corners, disgust with the politics of polarisation was fearlessly articulated. At many places, Hindus who had voted for the BJP voiced resentment at the suggestion that they could not be real Hindus if they did not climb the Hindutva bandwagon, or sufficiently suspect Muslims of being enemy agents about to reduce Hindus to a dangerously emaciated minority.

As I had occasion to state in a previous column, that the Modi-Shah duo seem to finally have brought about a fine unintended consequence – that of cementing a secular solidarity among citizens at large, thanks in no small part to their sectarian insistence on the CAA legislation and their intent to follow up with a patently devious purpose in carrying out a nation-wide NRC. This countrywide repudiation of a religion-based principle of citizenship has thus had the most salutary effect of awakening the polity at large to a new insidious subversion of the republic’s raison d’etre.

And in that process, Shaheen Bagh must be counted as a vanguard that has bolstered a nation-wide secular resolve like never before in recent years.

That the entire artillery of the Hindutva campaign – all the way from the prime minister to the home minister to a bevy of other ministers and elected representatives, supported by leaders of allied parties – has been so conclusively defeated by the sanity of the common Indian is indeed a watershed moment of incalculable possibilities. The question must now be about how sensibly and with how much hard work and organisational skill pro-secular republic political forces across the country harvest the events in Delhi to yield a lasting nation-wide fruit in the months to come.

That the Congress party should have so obviously held back its horses to facilitate the defeat of the Hindutva forces is indeed a most constructive political omen – one that all regional forces may emulate in their own time and place as other elections follow.

For now, let us give thanks to the phenomenal ingenuity and grit of AAP for having firmly put in place successful politics of honest hard work on behalf of the citizenry at large without turning away from the boldly unprecedented measures they have taken in school education, health care, in quotidian domestic budgetary support to services like electric power and water supply, in women’s safety concerns etc. without denting the capacity of the state to bolster its revenues, warding off corruption and unwarranted expenditure on class-based fanfare.

Think how much more the republic needs of the same.