Stitching together coalitions is messy work. Congress's inclusion in the opposition alliance, like that of regional parties, was for purely pragmatic reasons.

Coalitions have underwritten governments at the Centre for over 30 years – since 1977. Between 1980 and 1989, the Congress had a majority in the Lok Sabha with 353 seats and 404 seats during Indira Gandhi’s and Rajiv Gandhi’s tenures as prime minister respectively. The 2019 elections are a contest between the Bharatiya Janata Party-led National Democratic Alliance and a coalition of the rest.

The adhesive that binds the rest of the parties together is their agenda to unseat the BJP; the regional parties have constituted a powerful but flexible alliance, in which the Congress is in places an ally, and in other places an opponent.

The BJP’s two-man army of Narendra Modi and Amit Shah has heaped derision on the mahagahtbandhan, calling it “mahamilawat” – which roughly translates into the “great compost heap” of regional parties – and an “alliance of the corrupt”. However, these alliances are a formidable political force.

These alliances and partnerships are being ridiculed by the BJP as opportunistic and self-serving, meant to further the interests of leaders against whom serious charges of corruption are pending in unfinished investigations or inconclusive legal proceedings. Nevertheless, the allies, separately and collectively, pack a punch in the states where they are powerful.

Also read: What Happens if the 2019 Elections Lead to a Hung House?

The question now being raised is whether the mahagathbandhan has durability. Can this loose confederation of regional parties and national parties – like the Trinamool Congress, the Bahujan Samaj Party or the Communist Party of India (Marxist) – hold together and deliver a stable government, if the BJP is defeated in the 2019 elections?

It is intriguing that the question about the endurance of the mahagathbandhan is being asked and answered by the BJP. Or rather, that was a question that the BJP raised and repeated ad nauseam, till it was picked up and subtly rephrased by, of all people, Arvind Kejriwal of the Aam Admi Party. 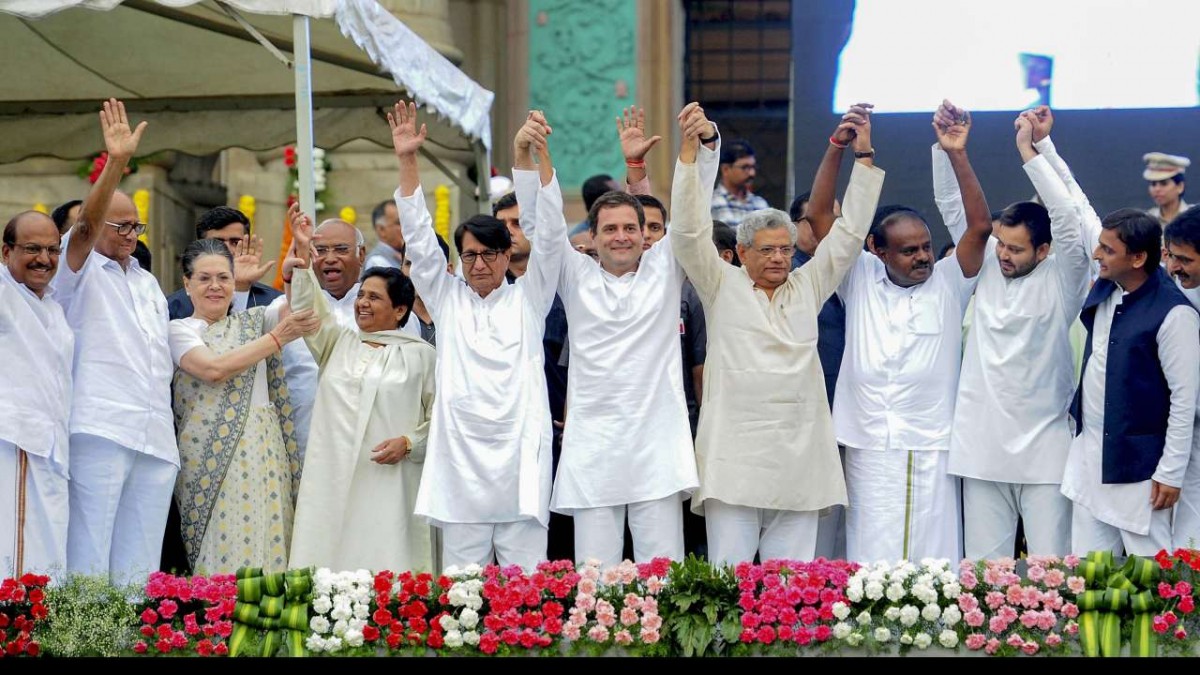 In line with this is the accusation that the Congress has also worked to throttle the CPI(M)-led Left Democratic Front in Kerala, by fielding Rahul Gandhi in Wayanad. The fact that the Congress and the Left are, by history and tradition, in opposition in Kerala seems to have been lost in this fiction of betrayal that is now being crafted to seed the thought that the Congress is not a reliable anchor in an opposition coalition.

Congress’s allegiance to the opposition alliance under fire

The implication is that since the Congress is untrustworthy and the mahagathbandhan has been deprived of seats by its machinations, the BJP is getting stronger by the day. Implicit in this narrative is the thought that the BJP, therefore, is the only stable alternative.

In sum, Kejriwal is implying that the idea of the mahagathbandhan has problems – that it has not been able to keep its house in order and promote the ambitions of its members. Moreover, the reason it is weak is because the Congress is undercutting smaller parties. That Kejriwal’s grudge against the Congress echoes Mayawati’s consistent criticism – that also occasionally turns up in more muted and less aggressive terms in the speeches by Samajwadi Party chief Akhilesh Yadav – is odd.

Over the two years that a possible grand alliance – and its previous avatar, the Federal Front – has coalesced itself into a powerful political force, it has evolved. There is a dynamic at work and the shape and size of the alliance has changed to take on the challenge of “oust, oust, oust” Narendra Modi and the BJP government at the Centre, in the vehement words of its godmother, Mamata Banerjee. 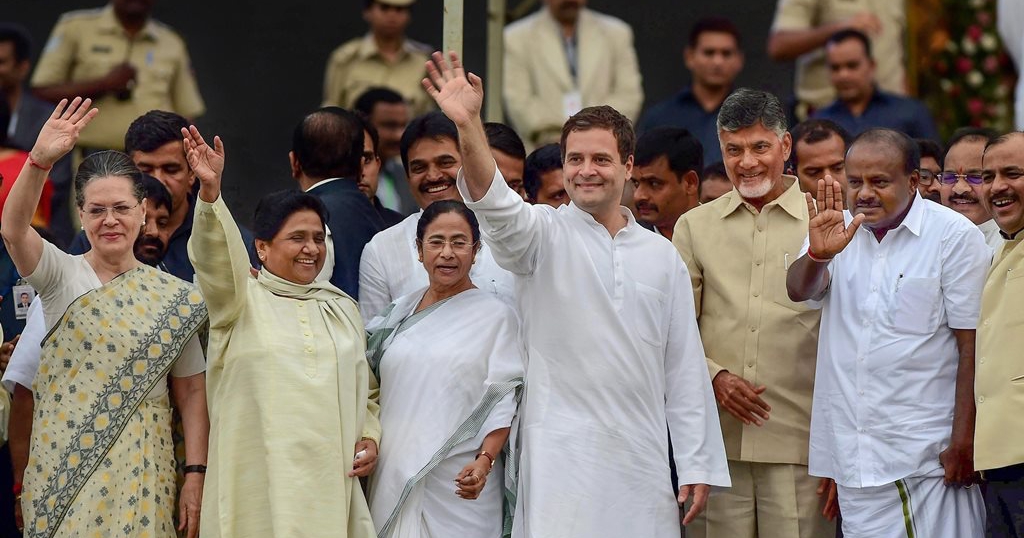 Members of what is being called the ‘grand opposition’ alliance. Credit: PTI

The Federal Front started out as a hope, with Mamata Banerjee spearheading the idea of regional parties coming together to fight as an alliance. She has since rechristened the alliance of regional leaders as ‘United Alliance’. The emphasis was on carving out a space for regional parties as a distinct group in national politics and national policy-making by determining priorities and especially resource allocation. It was a successor, in many ways, to the idea of a Third Front that had come into existence in the 1990s.

The chronology of the evolution of the front into an alliance is also significant. The front started out as an agglomeration that was neither with the Congress nor the BJP. It started out as anti-BJP and anti-Congress. The alliance between SP and BSP in Uttar Pradesh was forged to fight the BJP because, by then, the Sangh parivar and its divisive politics had grown so powerful that they posed a danger to the survival of the parties and, by extension, the survival of other regional parties in their states, including the Trinamool Congress in West Bengal.

The birth and the slow collapse of the mahagathbandhan

By the time the mega rally in Kolkata was organised in January 2019, attended by 23 parties and 26 national leaders of regional parties of all sizes, including the Congress, the Front was compelled, by circumstances, to change itself into a n alliance. The distinction was sharply drawn; the alliance was a coalition of anti-BJP parties that had a single point agenda – bowl out the BJP, in Mamata Banerjee’s words.

Also read: Mamata Banerjee and the Arithmetic Behind the Opposition Alliance

The January rally made it crystal clear that the Congress was integral to the strategy to oust the BJP. It also acknowledged that members of the alliance would have to work out their relationships with the Congress individually. The focus in January was to minimise the fragmentation of votes as a tactic for cornering the BJP and consolidating votes against it. Five months ago, Banerjee was promoting the idea of one opposition candidate per constituency against the BJP. The Congress was roped in to make this work effectively. 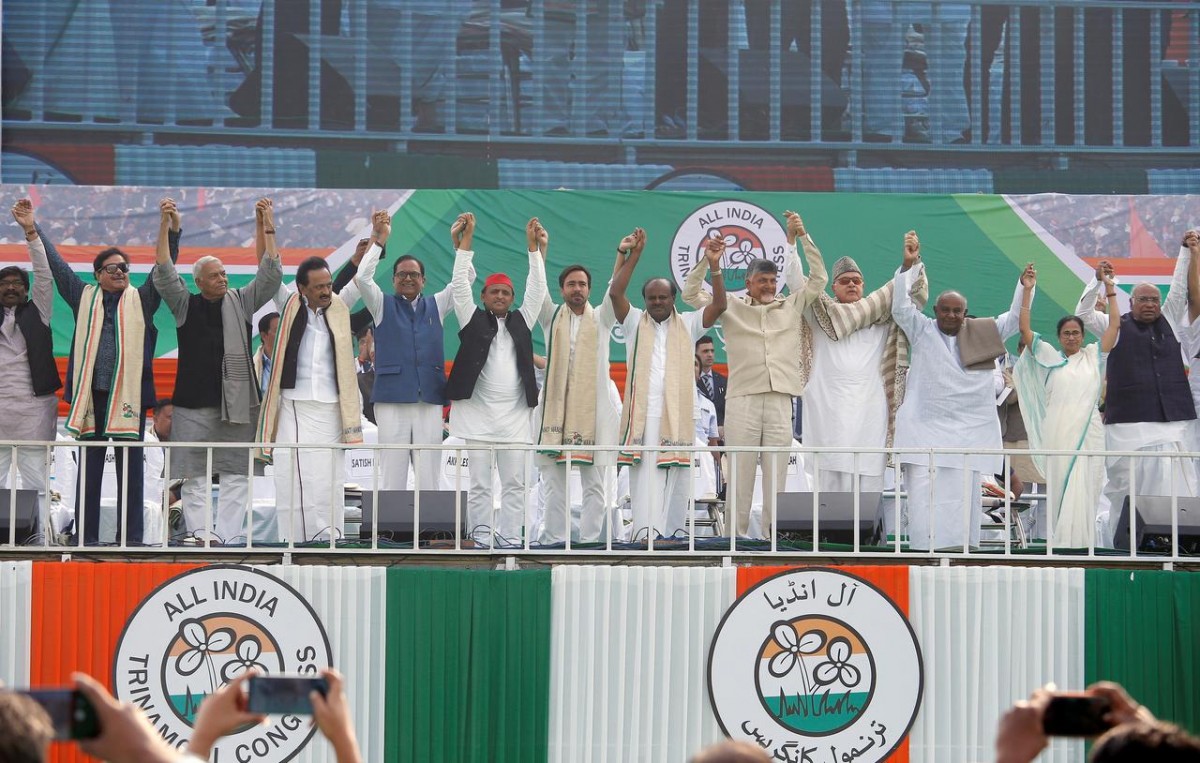 Leaders of opposition parties join their hands together during the “United India” rally ahead of the general election, in Kolkata, January 19, 2019. Credit: Reuters/Rupak De Chowdhuri

Over the last five months, the straight fight against the BJP remained the principal purpose, but the idea of the one candidate-one constituency faded. From what Banerjee has said, over and over again, regional parties in their respective states needed to work out the dynamics of that idea. If it failed, then so be it. In West Bengal, Banerjee knew that it would be a three and four-cornered contest. And she was mature enough to realise that such multi-pronged fights would happen in other places too.

By February, the AAP hosted a mahagathbandhan rally. The CPI(M) and the CPI were co-opted; they appeared on the platform, but it was carefully timed to be at a moment when Banerjee was not present. As leaders of the Trinamool Congress said, Banerjee was ready to eat crow to ensure that the best possible combination of political forces could be brought together to defeat the BJP.

It is, therefore, surprising that Kejriwal and Mayawati claim to be so righteous. The Congress was included in the alliance, like the CPI(M) and the CPI, for entirely pragmatic reasons. But at no point did the alliance believe that these parties would sacrifice their political interests; because the regional parties would not do so, either.

The mahagathbandhan was designed as a loosely knit formation. In places where votes have been consolidated – as happened in Gorakhpur-Phulpur and Kairana by-elections in UP – the BJP is up against a strong challenge. The alliance has worked and is expected to work, as a straightforward force multiplier with votes being transferred from one party to another in an orderly fashion. In other places, multi-cornered contests could work against the BJP and in some places to the BJP’s advantage.

Cracks in a once-promising alliance

In February, it was obvious that the parties to the possible alliance understood that the seat sharing and partnership building would have to be done independently and state wise. There would be no supreme council of leaders arbitrating on fights, accommodations, betrayals or any other shenanigans that local leaders get up to when the election process gets underway.

Also read: Will Opposition Unity in 2019 Withstand the Fragilities of Past Coalitions?

Either the long drawn election process is fraying nerves, depleting stamina and inducing a loss of the huge confidence with which the alliance launched its fight or the absence of an anti-incumbency wave is eroding hope among some of its members as their anticipations of a pro-change wave have not panned out.

With two phases and tense contests coming up, the undermining of the alliance from within is a puzzle that needs to be cracked. It must serve some purpose. Therefore, what exactly are these blows against the duplicity of the Congress expected to achieve?