Mohammed Meraj Ahmed rides his customised bike every day in his village and adjoining areas, and urges people to vote for the SP. 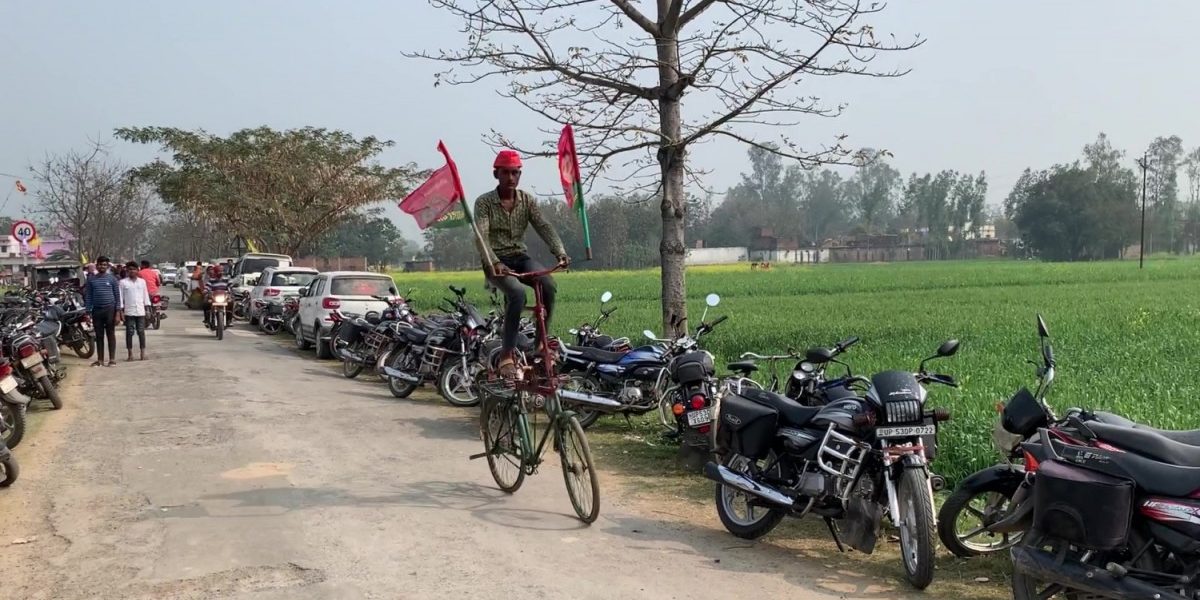 Chauri Chaura: Recently, in one of his rallies in poll-bound Uttar Pradesh, Prime Minister Narendra Modi linked the 2008 blasts in Ahmedabad with the Samajwadi Party’s election symbol, a cycle. “All the blasts occurred because of bombs placed on cycles. I am surprised why they chose the bicycle,” he proclaimed.

Just four months before the prime minister made this remark in Hardoi, a teenager and class 9 student from Rajdhani village in Gorakhpur’s Chauri Chaura assembly constituency was longing for a new bicycle, as his old bike had broken down. As his father, a labourer, was unable to afford it, the boy decided to repair his bike himself. After giving the cycle a facelift, he began campaigning for the SP on it.

Mohammad Meraj Ahmed’s peculiar bicycle has earned him the status of a ‘star campaigner’ for the SP in Chauri Chaura. Meraj rides his customised bike every day in his village and adjoining areas, and urges people to vote for the SP. People are often bewildered at his the strange vehicle, which is double the height of a normal cycle. Many  even ask to ride it.

I met Meraj and his cycle on the afternoon of February 25 in Ram Pur Rakba village at Mall ki Chhawani in Chauri Chaura. A rally had been organised for the SP candidate Captain Brijesh Lal Paswan, attended by former cabinet minister Swami Prasad Maurya, president of People’s Party Socialist Sanjay Chauhan and vice-president of Suheldev Bharatiya Samaj Party Mahendra Rajbhar. People reached the venue on bicycles, motorcycles and tempos.

Meanwhile, Meraj also arrived on his cycle. As soon as he came into sight, everyone’s attention turned to Meraj. People gathered around him. An SBSP worker expressed his desire to ride the cycle, but he managed to climb the bike with great difficulty and could pedal it only for a few feet. Meraj performed a bicycle show several times around the venue ground.

Meraj proudly claims that he is a resident of martyr Abdullah’s Rajdhani village and lives close to the freedom fighter’s house. Abdullah is one of the heroes of the Chauri Chaura rebellion and was hanged by the Britishers for leading the famous revolt. 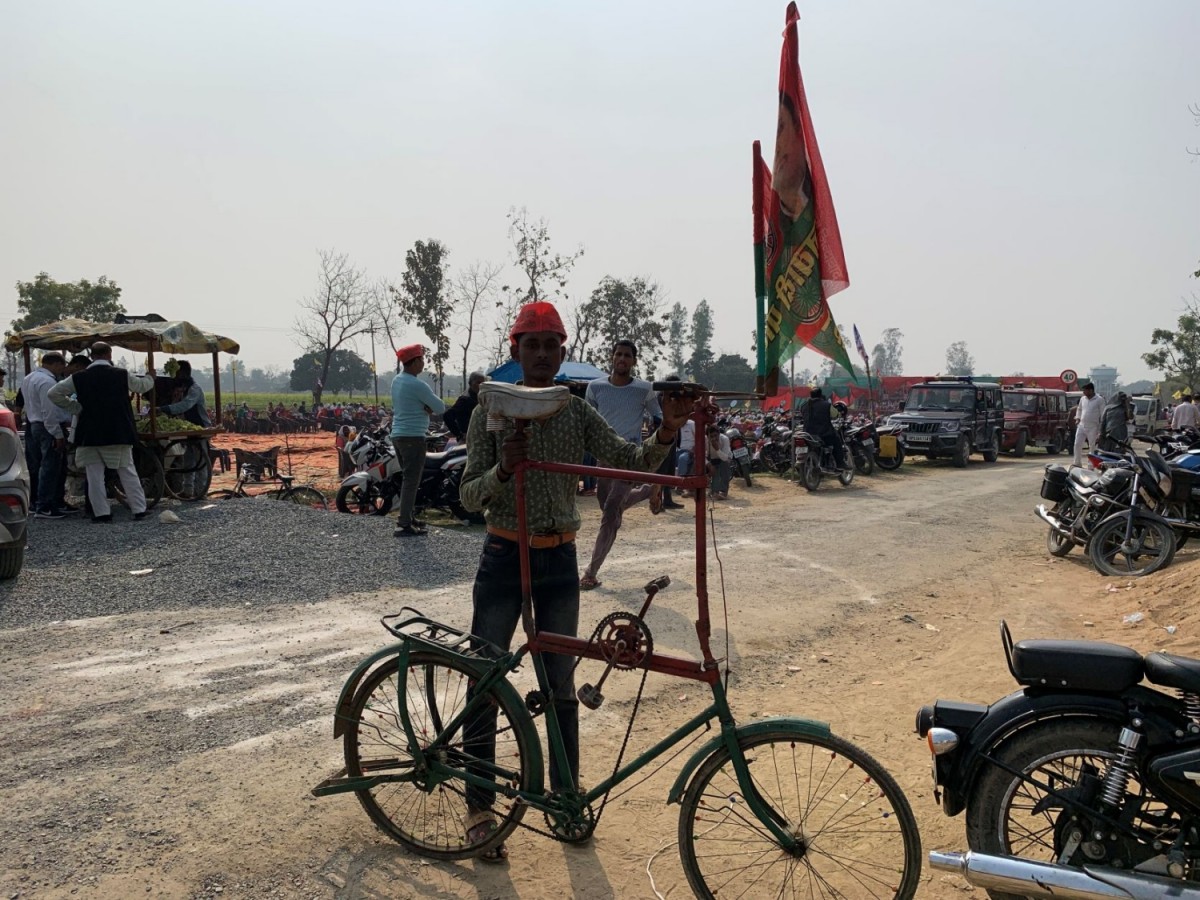 Meraj knew little about the Chauri Chaura incident and martyr Abdullah until a programme was organised in his college on the anniversary of the rebellion last year, where he learnt about the historical revolt in detail. Meraj says that after learning about the Chauri Chaura rebellion, he felt proud of his village and now prefers to introduce himself as a fellow villager of Abdullah, the martyr.

Meraj’s father, Shakir Ali, earlier ran a cycle repair shop in Rajdhani village. His elder brother taught at a madrasa in Maharajganj but he lost his job during the lockdown imposed during the COVID-19 pandemic and is now unemployed. Due to a growing financial crisis, Shakir Ali travelled to Surat seven months ago after he found a welding job there. He sends money home to bear the family’s expenses.

Also read: UP: In Sirathu, Deputy Chief Minister Keshav Prasad Maurya Is on a Sticky Wicket

Meraj said that he learned how to repair cycles and do welding from his father at a young age. His mother, however, does not allow him to use the welding machine as she fears it might damage his eyesight. When he began redesigning his cycle four months ago, his mother was reluctant to allow him at first but later granted him permission. Meraj welded and added new parts to the cycle within four days, making it as tall as himself. He has also installed a double chain and two pairs of pedals on the cycle.

The total cost of rehashing the cycle came at around Rs 700. Despite it being very high, Meraj climbs on to the bike quite easily, without faltering, and balances it smoothly. The handle of the bicycle has a pipe inserted to hold tall flags. Meraj had to practice for two days before efficiently riding the cycle. 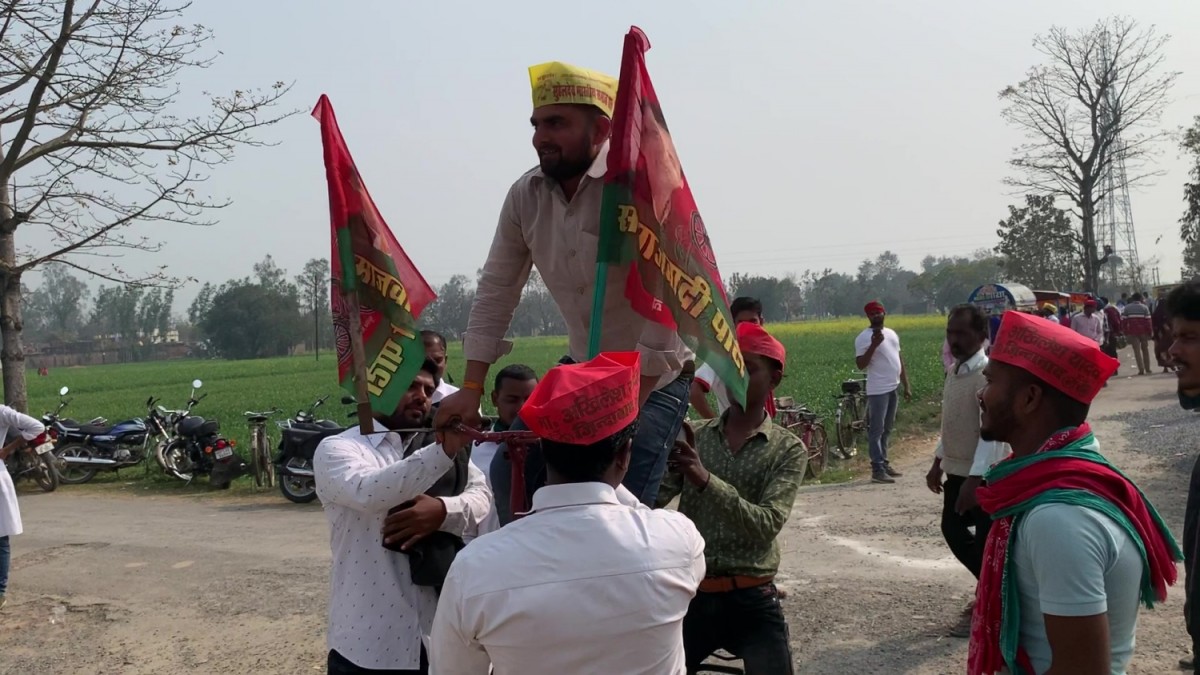 When asked how he came up with the idea of ​​customising the cycle, Meraj said that he has been an admirer of Akhilesh Yadav, which is why he wanted to campaign for him. As people paid little attention to the usual bicycle, he increased the cycle’s height to make it more noticeable. In the last four months, he has been routinely riding his bike. He claims that people often stop him on the way out of curiosity and talk to him about his campaign.

Meraj said that his experience during the past four months has been pleasant overall except for a few incidents when he was asked not to campaign for the SP and to put up saffron flags and promote the BJP instead. However, Meraj plainly refused to do so. He claims that so far, no one has mistreated him or misbehaved with him.

Meraj is not 18-years-old yet and cannot exercise the right to vote. He says by the next elections, he will be of age and will be able to cast his vote. He is confident that Akhilesh Yadav is going to win this year. “I am 100% sure Akhilesh will form the government,” he said. “Most of the people in our village are voting for him. If Akhilesh’s government is formed, our electricity bill will be waived and the unemployed will get jobs.”

He will keep riding the bicycle until the elections are over, he said.

When asked whether he had heard what the prime minister said about the bicycle, Meraj said he was not aware of it as he does not have a smartphone and usually does not follow the news.