A Reality Check Has Inspired Sitaram Yechury to Steer CPI(M) Towards a Different, Holistic Agenda

But for that to be achieved, he will have to carry the hidebound party with him. 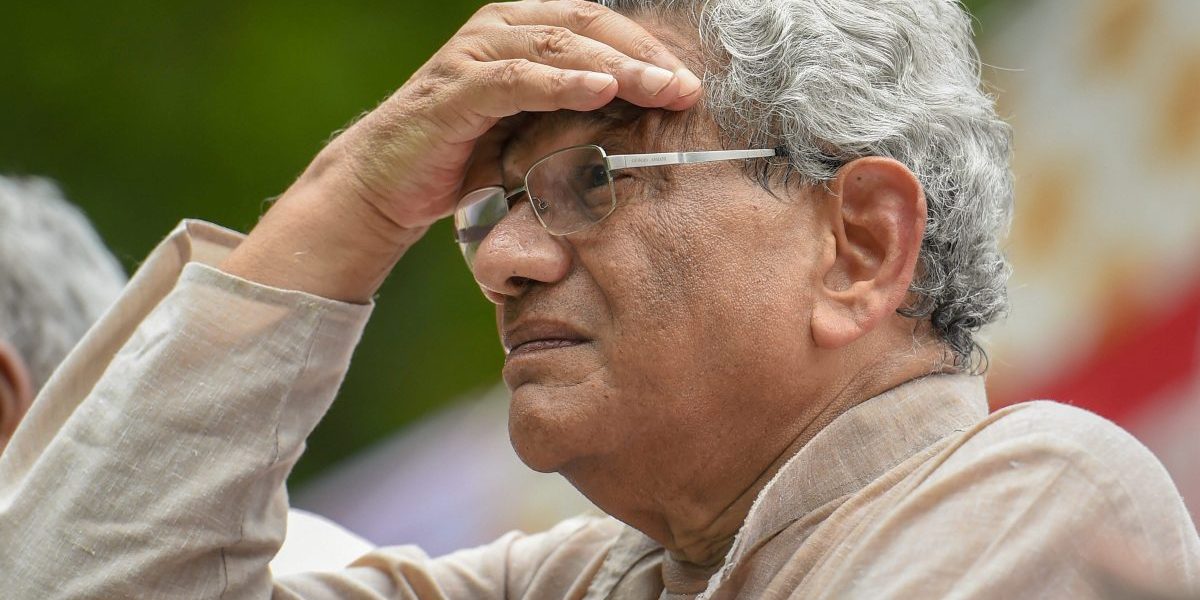 Enlightenment has finally come to the Communist Party of India (Marxist). Reality has sunk in that its ultra conservative, ancient formula of historical forces and economic determinism is ineffective against the hyper-nationalist, majoritarian, communally divisive narrative of Hindutva crafted by the Rashtriya Swayamsevak Sangh and by Narendra Modi.

Dumping its classic canon that liberating the economic sphere and releasing the work force from the captivity of capital will magically establish a new order, the visibly emaciated and mentally exhausted CPI(M) is on its way to a fresh start.

Two things are striking in a recent low-key interview by Sitaram Yechury after his confirmation, once again, as the general secretary of the CPI(M) by the 23rd party congress in Kannur. Broadcast on Facebook and with the transcript published in Bengali in the party’s newspaper Ganashakti, Yechury delivers two unequivocal messages.

First, that the CPI(M) identifies the Bharatiya Janata Party and the Sangh’s Hindutva fascism as the principal enemy.

The Communist party, Yechury says, is set to take on the challenge of putting together a “counter offensive” to counter the ambitions of establishing a “hegemony” of Hindutva that is “destroying the very inclusive concept of nationhood.” The identification of the BJP as the single, principal enemy is very different from the CPI(M)’s past, when it equated the BJP and the Congress, quite mistakenly, as political foes, even while it conceded that the Hindutva politics of the Sangh was more dangerous to the unity and diversity of India.

A movement or struggle based on popular discontent against growing economic misery is not strong enough to defeat the BJP. As Yechury puts it, “the BJP won” by mobilising emotions and passions and by running an aggressive campaigning focused on Hindutva in Uttar Pradesh’s recent state assembly elections.

The BJP cannot be defeated by only focusing on the economic issues of inflation, unemployment, hunger and poverty, he explains. The days of “piecemeal struggles” against “neo-liberal policies,” and the sinister designs of “neo-imperialism” and other such overused clichés are ending for the CPI(M).

Facing up the reality of near extinction, except in Kerala, where it is going strong as the ruling party, Yechury has finally arrived as the leader tasked to find a way out of the maze in which the party has been trapped. 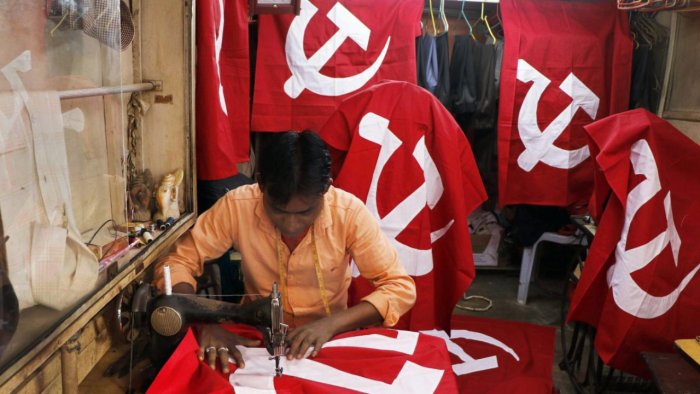 The design and construction a “holistic” counter offensive to challenge the hegemonist agenda of the BJP and the Sangh’s “Hindutva fascism,” is emerging as Yechury treks across India mobilising his cadres. He is also talking to political parties and “politically engaged forces” who are secular, democratic and committed to the basic structure of the constitution and the inclusive culture of India. The launch of the revised political task of the CPI(M) is not old wine in a new bottle. Neither is it, as yet, the creation of a new vintage. If Yechury pulls off even half of what he says he must do, it could add up to a fresh bold blend in a new bottle.

The role of the CPI(M) will be that of a catalyst, Yechury says in the interview. The challenge, as he sees it, is to initiate and lead a counter consolidation by mobilising social, “cultural, political and economic  forces” rather than forging a political front of secular, democratic parties or an economic movement of organised and unorganised labour, farmers, farm workers and white collar workers. On Yechury’s list now are people from the Dalit movement, minority organisations, indigenous and tribal organisations and those groups that are battling the Sangh’s Hindutva homogenisation agenda.

By prioritising mobilisation over forging a political front of like-minded secular, democratic parties to challenge the BJP electorally, Yechury is defining the party’s role and responsibility as the ideological and therefore political antidote to the ideology and politics of the BJP and Sangh. He is inviting political, social, cultural, political and economic organisations and groups to join up to create a mass movement against the ideological-religious Right.

Also read: ‘After All, My Name Is Stalin’: In a Speech at CPI(M) Congress, a Roadmap to Counter BJP

The Yechury interview signals an awareness, missing until now, that the CPI(M) has fallen short of serving as a firm bookend on the Left that functions to maintain the balance of the centre against the rapidly spreading and ever stronger Right, represented by the BJP and its associates and the Sangh and its network of social, communal and cultural organisations. The belated acknowledgement, albeit tacit, that the Left has almost keeled over and destabilised the political equilibrium that slowed down the BJP-Sangh’s religious Right encroachment of the political space is one more indication that the CPI(M) is finally coming to terms with the new political reality.

Sitaram Yechury’s conclusion that “competitive Hindutva” tactics, like celebrating Hanuman Jayanti by chanting the Hanuman Chalisa as Arvind Kejriwal of the Aam Aadmi Party did, or the politics around Ram Navami celebrations in West Bengal end up feeding into the BJP-Sangh’s consolidation of the Hindu majority by tacitly adding to the credibility of loud and public performances of piety is insightful.

The copycat antics of parties that declare themselves as secular and democratic reveal their vulnerability as challengers to the BJP, Yechury has argued.

The way Yechury has defined the role of the CPI(M), it seems the party could end up as the bulwark in the middle, between the BJP on the Right and the anti-BJP opposition on the Left. It is an intriguing strategy that imagines the CPI(M) as the immovable pivot or lever in the middle that maintains the balance between the BJP on one end and the anti-BJP parties, on the other.

Given its ideological roots and its unswervingly anti-BJP, anti-Right politics, it would be silly of the CPI(M) to insert itself as an immovable wall in the middle, were Indian politics imagined as a playground with a see saw. The CPI M’s task is to add heft to the Left’s fight against the BJP and so to add its weight and its moral presence to the centre and parties and organisations that are Left of the centre. If it can move the lower end up and lift the anti-BJP opposition to the point where gravity pushes down the BJP and reduces its toxic effect on India’s politics, institutions and values, Yechury’s new term as general secretary will be able to salvage some of CPI(M)’s wrecked reputation.

There seems to be a perception that the BJP led National Democratic Alliance is sitting on a formidable pile of votes. Its vote share in the 2019 Lok Sabha elections was around 45%, though the BJP’s vote share was less at 37.36%. In other words, the non-BJP parties won 55% of the votes. There is a fallacy in this estimate. The BJP’s overwhelming support comes from Hindu voters. By that measure, its vote share of 37.36% is under 50% of the Hindu vote, assuming that the population of Hindus in India is around 80%.

The BJP is therefore on a high and dislodging it requires what Yechury has outlined in his interview – a holistic mobilisation of secular, democratic forces, wherever they are to be found so that the equilibrium can begin to be shifted towards the anti-BJP end of the see-saw.

To do so, Yechury has to carry his party with him. Always faction-ridden and always engaged in internal skirmishes, the CPI(M), even in its decimated state, is not easy to lead. The party has always had problems with factions that live in a bubble, distanced from the present, and with the lack of pragmatic leaders who are tasked with navigating the party’s survival into the future. There have always been tensions between fastidious purists, like the hide-bound majority that voted against Jyoti Basu becoming prime minister in 1996, and less fussy practical politicians like Basu, who imagined a different future for the CPI(M), if it led a coalition at the Centre.

The route that Yechury has traced seems to navigate a safe passage between the orthodox and the heterodox. How long it will remain safe is impossible to guess. The decline of the CPI(M) is keeping the factions in check, because as of now, there is no one who is actually willing to challenge Yechury by putting a spanner in the works. The buck stops with him. If he succeeds even partially in reviving the party as the political conscience keeper of the nation – as the party in the middle – he will have achieved a great deal. If he fails, the party will collapse, though it may not be extinguished.