Rahul's Exit is a Historic Opportunity for the Congress, and its Members

Rahul Gandhi’s unforced but much-needed departure from the office of party president has opened up possibilities of a new future, provided its leaders and rank-and-file are willing to seize the moment.

On January 31, 1959, Mahavir Tyagi, a senior Congressman and a member of parliament, gathered all his wits and courage to pen a letter to Jawaharlal Nehru, warning the prime minister that he was being increasingly surrounded by sycophants who were bringing a bad name to the party and the government, and that these very darbaris were now lobbying for Indira Gandhi as the next Congress president.

Nehru replied the very next day. The redoubtable leader rejected any suggestion of a Nehru court and feigned disinterestedness in an Indira Gandhi presidency, but insisted that if that was what “the party” wanted, he would abide by the decision, which was not without its cons and but had all its pros.  And, he ended his response to Tyagi with an expression of confidence and faith in India’s future.

In the event, Indira Gandhi did get elected as the Congress president, and Tyagi remained unmolested. He was not isolated; he was not made to feel a traitor. On the contrary, he got inducted into Nehru’s cabinet after 1962.

What this meant, quite simply, was that the Congress was still an institutionalised political formation, with established organisational norms and manners. It could easily take in its stride one presidential term of Indira Gandhi without establishing any precedent of entitlement. Because of a robust organisational culture, it could, when the time came, smoothly oversee two national successions, in 1964 and 1966; and, when needed, it could undergo internal turmoil, in 1969-70, to reinvent itself, rearrange its ideas and predispositions.

Unhappily, from the mid-1970s, the party became synonymous with the Nehru-Gandhi family, and, inevitably, an institutional degeneration set-in. From 1998, it firmly recast itself as a political tribe, owing its existence and its allegiance to the chief. The legitimacy of the leadership came to be derived from membership of the chief’s family.

In 2017, the Congress tribe rejoiced when the chief’s son was anointed as the new chief. Now, the chief has walked away, conceding that he has no shamanistic potency, no magic, no wizardry. A massive ten year investment has just gone bust.

As the hereditary chief, it was perfectly normal for Sonia Gandhi to want to ensure that her son became the new chief who, in good time, could lay claim to the king’s throne. But thanks to one of the tribe’s earlier ancestors, Jawaharlal Nehru, the royal crown was and is subject to democratic contestation and electoral ratifications.

A slight detraction may be permitted here.

In 1960, the billionaire Joseph Kennedy had ensured that the Democratic Party preferred his son, John, as its presidential nominee over a distinguished standard-bearer, Adlai Stevenson, who had twice unsuccessfully contested elections against the war-hero, General Dwight Eisenhower. Despite two defeats, Stevenson was still the most loved and most respected man in the Democratic Party. Before a “Kennedy Mystique” got manufactured, Senator Stevenson had warned that “though bright and able”, John Kennedy was “too young, too unseasoned” to be president and that he “lacked the wisdom of humility.” Stevenson was of the view that “both Kennedy and the nation would benefit from a postponement of his ambition.” 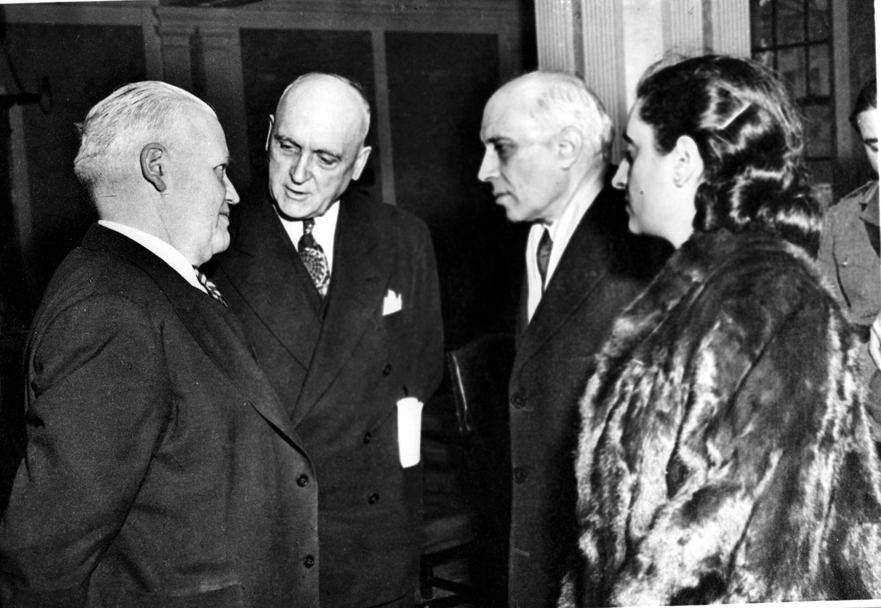 During a tour of the US, Jawaharlal Nehru, Prime Minister of India, visited Madison, Wisconsin, in November, 1949. In this photo, Nehru is seen with Indira Gandhi and local officials. Photo: Indian Embassy Washington/Nov.49/Flickr

A postponement of ambition

In similar vein, it can be suggested that the Congress and the nation would stand to benefit from a postponement of Rahul Gandhi’s ambition. Perhaps Rahul Gandhi has done the Congress a seriously good turn by creating a historic opportunity for this oldest political formation in the country to reinvent itself as a modern political party, to unmoor itself from the anti-democratic notions of dynastic entitlements.

As the Congress members undertake this task, each one of them must be cognisant of this painful fact: for the first time since 1947, the Congress will be out of power for at least a decade. The very enormity of a decade without power at the Centre, without a voice in decision-making at the national level, enjoins them to be responsible, sincere and imaginative.

This can be daunting. The Gandhis have become a habit with the members of Congress, a safety valve, a totemic presence. The habit of ideas and ideology has been systematically discouraged; as long as the Gandhis could help them get into positions of power, these members were only too happy to render a kind of passionless loyalty to the family. Now, a decade without power means the Congress would need to understand how much of India has changed, and, then figure out for itself what kind of role it would have in this changed India. But the basic minimum of this churning has to be a new relationship between the leader and the led.

The dynasty model has failed. Yet, many Congress members are still psychologically unprepared to think beyond the Gandhis; many of them do not want to be in the position of an ahsaan faramosh, an ingrate, even though they deeply resented Rahul Gandhi’s entitled superciliousness. It is too disorienting for them to think that the Congress could be a formation other than a family outfit. They are too afraid to be reminded of their own history.

Also Read: When Jawaharlal Told People Not to Elect Him Congress President for Third Term

All organisations are built on fragile ties – of loyalty to the chief, ideological and intellectual commitments to the group; an esprit de corps, cultivated habits of working together, the joyfulness of collectively pursuing and achieving goals and ideals over and above individual ambitions. A political organisation has to have a sense of larger national vision, a greater public purpose, and a commensurate moral mission.

The Indian National Congress embodied, not long ago, all these traits. It can still boast of an enviable bench-strength; till five years back, these men and women were running the affairs of the Indian state.  Now, without the burden of factoring in the Gandhis’ convenience and calculations, these functionaries are surely capable of making the transition to a democratic future. All that is needed is for the honourable men and women to attend to this task honourably. The time for pettiness and intrigue is over.