A Day After TMC, BJP Promises Free Vaccines in Bengal 'as Soon as' It Comes to Power 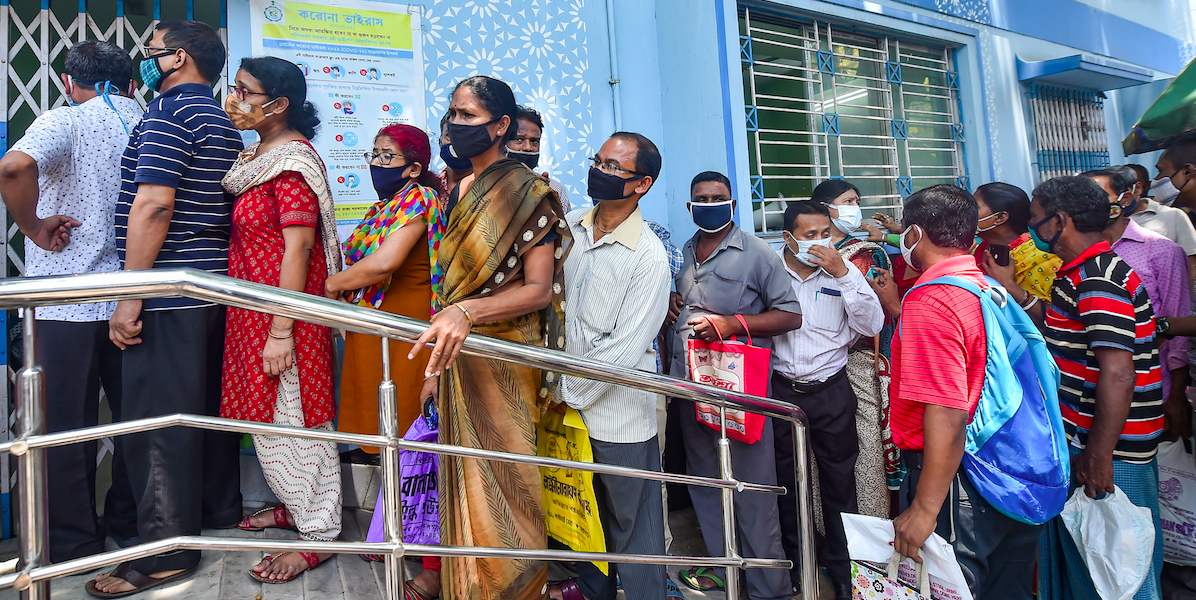 Beneficiaries stands in a queue outside a health centre to receive a dose of Covid-19 vaccine, amid surge in coronavirus cases, in Kolkata, Monday, April 19, 2021. Photo: PTI

While Banerjee on April 22 promised free vaccines from May 5 onwards, BJP tweeted on April 23 that it would provide the vaccine free of cost “as soon as BJP government comes to power in West Bengal.”

As soon as BJP government comes to power in West Bengal, COVID-19 vaccine will be provided free of cost to everyone. pic.twitter.com/gzxCOUMjpr

Although unlike BJP, Banerjee did not place the clause of being voted to power in as many words, that free vaccination would depend on her re-election is evident as the results for the Bengal assembly election will be declared on May 2.

“After the results are out, after May 5, we will vaccinate all for free,” she is heard saying in a video clip tweeted by TMC.

The model code of conduct for elections in India posits that the government may not lay any new ground for projects or public initiatives once the period within the MCC begins.

In reaction to BJP’s promise, the TMC said that this would be like the promise made before the Bihar assembly election.

The ruling BJP-JD(U) combine in Bihar had announced before the assembly polls that vaccination would be free for all in the state if the parties return to power.

Until May 1, vaccines for everyone above the age of 45 and healthcare and frontline workers has been free at government hospitals. However, the Centre has recently announced that from May 1 onwards people between the ages of 18 and 45 too will be eligible to get the vaccine.

From May 1 onwards, state governments and private hospitals will be able to procure vaccines directly from manufacturers at the price that the latter choose to set.

Also read: Everything You Wanted to Know About the Price of Vaccines in India

The Centre has, so far, not placed a cap on what this price can be and there has been no announcement as to whether the vaccine will be free at government hospitals for those between 18 and 45.

The Bihar government has made no announcement clarifying this in the light of the BJP-JD(U)’s pre-poll promise, yet.

Additionally, both parties’ promises raise the question of violating MCC guidelines and bring up the humanitarian concern of setting a pre-requisite like an election victory in the path of a potentially life-saving drive.

Bengal still has two more rounds of polling to go, including the crucial Kolkata constituencies on April 26.

A number of states, three of them BJP ruled, have said that they will inoculate respective state residents for free. These are Uttar Pradesh, Madhya Pradesh, Assam and Chhattisgarh.