As Elections Approach, How Will BJP, Opposition Play Their Hands?

Opposition parties must show magnanimity in working out alliances and offer a multi-party alternative, to avoid the trap of a presidential contest against Narendra Modi.

Opposition leaders at a rally in New Delhi. Credit: PTI/Files

With just a few weeks to go before we head into the general elections in April-May 2019, it is clear that this will be no ordinary electoral contest between the Bharatiya Janata Party (BJP) and the opposition. What’s at stake is the future of our democratic republic.

The last five years have witnessed the institutional pillars of India being dismantled and even the act of speaking has become dangerous. The rise of conservative religious ideologies, vigilantism and violence, and the narrowing scope for dissent, has placed our democracy at risk.

India’s pluralistic democracy works well precisely because no single culture or language is central to its identity or unity. This is under threat from right-wing forces, which are seeking to change the fundamentals of our vibrant democracy if they win the next elections again.

The 2014 election laid the ground for the political ascendance of the BJP, resulting in a major shift to the Right as Narendra Modi led his party to a sensational win. The decisive majority it earned in 2014 – coupled with an impressive string of state election triumphs – represented a critical juncture in the evolution of India’s political system.

The decimation of the Congress is an important feature of the new party system, as the BJP’s gains have largely come at the expense of the Congress. The BJP’s overwhelming dominance has squeezed the space for centre-Left forces and given popular legitimacy to the narrative of the Right on issues of nationalism, religion and justice, even as it seeks to deny space to any notion of democratic opposition, dissent or resistance.

The BJP’s rule has shifted the goal posts. Its hegemony indicates a shift from consensual and accommodative democracy to an authoritarian and majoritarian one. At the level of the party system, this shift can be seen in the rhetoric of ‘Congress-mukt Bharat’.

The idea of freeing India of Congress represents more than the removal of the party from power, it means replacing democracy based on diversity and pluralism with a majoritarian democracy. This slogan is given a refit from state to state since the ultimate objective is to ‘free’ India of opposition parties. This kind of politics is at odds with what a true and representative democracy should look like.

This is not surprising, as the BJP is not an ordinary right-wing party, like the British Tories or the Republicans in the US, or even the new far-right politicians and parties in central and eastern Europe. Its uniqueness in the general configuration of right-wing parties in the world is that it is not an independent party; it is in its essence, a right-wing front of the extreme Right represented by the Rashtriya Swayamsevak Sangh, modelled on European fascist organisations. There is no analogue for this particular structure of relationship and the thinking it embodies in the right-wing parties and authoritarianisms in other parts of the world.

The BJP’s influence on social and political discourse runs deep, and support for it is increasingly acquiring an ideological character. What is unfolding in the political arena is a fundamental contest between the original pluralist vision of Indian democracy and the exclusivist view of the Hindu nationalists, which is defined by the idea of mobilising religion in the service of political power.

At the ideological level, the conflation between Hindutva and nationalism has been the backbone of BJP’s dominance, even though religious nationalism is the very thing that divides us. Over the next five years, it hopes to consolidate its hegemony as the only national player around which the dominant classes can coalesce.

However, it’s important to remember that majorities are contingent and don’t last, at least in part because opposition parties make adjustments to capitalise on opportunities. BJP’s emerging hegemony should not be conflated with electoral invincibility.

A series of setbacks have dissipated this aura of invincibility. Elections have demonstrated in states such as Bihar, Delhi, Karnataka, Madhya Pradesh, Rajasthan and Chhattisgarh that the party is fallible. In fact, it hasn’t won a decisive victory in the states after its below par performance in Gujarat in December 2017.

Actually, the BJP did worse than expected in both Gujarat and Karnataka. In Gujarat, the BJP came down below 100 seats and in Karnataka it won fewer seats than in 2008. The party’s ability to replicate in 2019 the electoral success it achieved in 2014 looks unlikely, given that the BJP government has been fast losing momentum due to its governance record over unemployment, social tensions and the management of national security after the Pulwama terror attack on February 14, which killed over 40 CRPF personnel.

The odds of BJP beating the opposition even after Pulwama and the airstrikes aimed at a Jaish-e-Mohammad camp in Balakot seem no better than even. In India’s first-past-the-post electoral system with a dominant party whose vote share falls short of a popular majority, opposition coordination plays a crucial part in undermining single-party dominance. The aggregation of votes at the constituency level is vital to prevent potential gains to the BJP from fragmentation of opposition votes.

The BJP too needs allies in the southern and eastern states, except in Karnataka and Assam. This is because the ruling party’s narrow majority of 52% of Lok Sabha seats is very disproportionately based on an unprecedented sweep in the northern and central states, three western states and union territories.

However, there are wide ideological differences between opposition parties, partly because the Congress is the principal competitor of important regional parties. Efforts are on to bring national and regional rivals together to take on the ruling party. This kind of alliance is more likely to function at the state-level than as a pan-India alliance. State-wise pooling of anti-BJP votes seems the only viable option to avoid contradictions among various opposition parties. 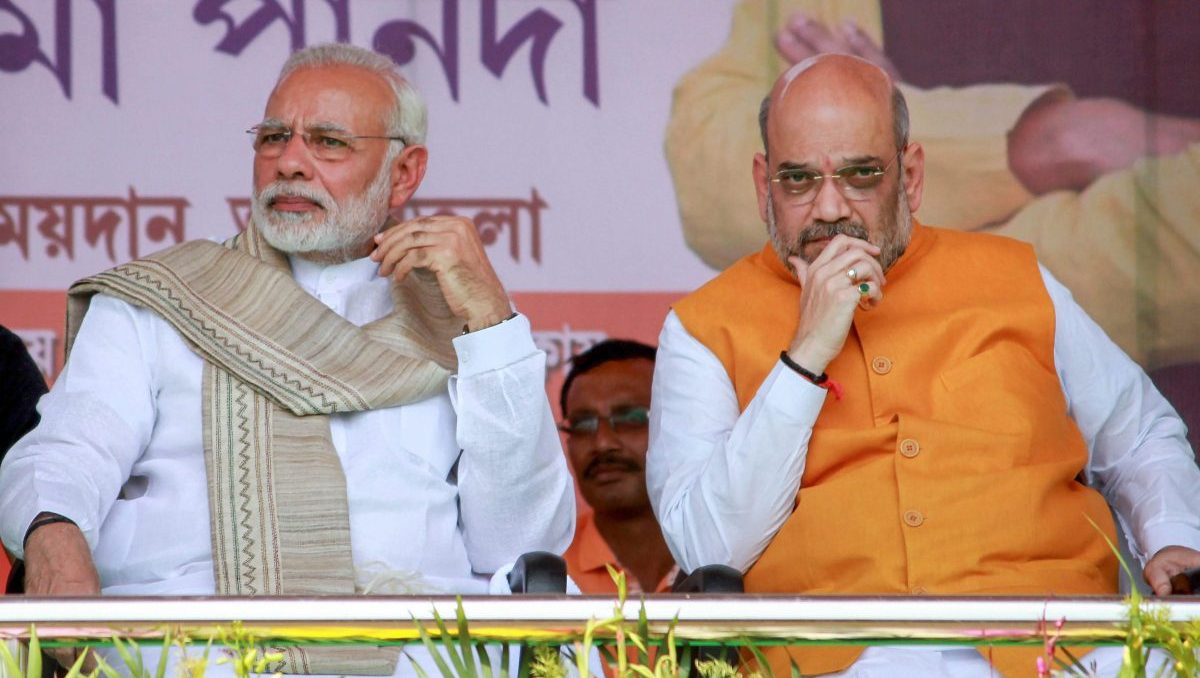 The alliance in the 2015 Bihar state elections, and the Samajwadi Party and Bahujan Samaj Party alliance in the 2018 UP by-elections, are pointers of this alternative. The May 2018 assembly election in Karnataka indicates the advantage of opposition unity in thwarting the BJP. Here, the Congress managed to stitch up a governing coalition even though the BJP had emerged as the single largest party. This coming together of the Congress and Janata Dal (Secular) in Karnataka is a platform for a larger anti-BJP coalition on a national scale.

The resilience of regional parties and the formation of a coalition government comprising different parties is a reflection of the diversity of regional, cultural and linguistic identities in the country. It is much more in tune with the diversity of India than single-party rule wedded to the monolithic “One Nation, One Culture” canon. Furthermore, it underscores the federal character of polity and the failures of the BJP government’s centralising and homogenising tendencies. Also, popular disappointment over its performance has made opposition convergence apposite.

With the momentum for opposition unity building up, the BJP has decided on a strategy to demonise opposition leaders as opportunists who are out to forge unprincipled alliances only to displace Narendra Modi from power. This makes it clear that the BJP is not banking on the achievements of the Modi regime and hence attacking the lack of a singular alternative.

Both Modi and Amit Shah have derided opposition unity and the effort to form what Modi called a “milavati sarkar (adulterated government)”, which will plunge the country into chaos and instability. Shah also mocked at the prospect of a coalition government formed by opposition parties by repeatedly saying that such a government would have a new prime minister every day.

The notion that coalitions have been disastrous for India doesn’t stand scrutiny. The Narasimha Rao government is a good example – it was a minority government that not just survived for five years but also ushered in seminal economic reforms. Atal Bihari Vajpayee ran a coalition and both governments of the United Progressive Alliance were coalitions too.

Single-party majority governments are not necessarily better in governance or development. The BJP government’s record on the economy and national security indicates this. Their incompetence is reflected in the arbitrary decision on demonetisation and the shoddy implementation of the Goods and Services Tax.

The BJP invariably wants to win elections by harping on identity fault lines and highlighting Hindu identity. It was unthinkable that a political battle could be won by playing up the Hindu identity, but that has changed now. This is why, at this time, opposition unity is crucial for countervailing the BJP-National Democratic Alliance’s communal-majoritarian project.

For their part, opposition parties must show magnanimity in working out alliances and offer a multi-party alternative to avoid the trap of a presidential contest against Narendra Modi.

National security will compete with jobs and agrarian distress as critical issues in this high-stake election, but it remains to be seen if it can sideline these other issues. It is for the opposition to hold the government to account on all these issues.

Besides, there are other issues agitating the public mind – mob lynchings, trampling dissent, making people live in fear – which are terrible regardless of whether or not they affect the economy. The opposition has chosen to focus on economic issues while remaining silent on questions of national security and pluralism. Their silence, no matter who wins the next election, will help nudge the political discourse a little more rightwards.