Prior to the announcement, opposition leaders had gathered at the Parliament annexe for a meeting convened by NCP chief Sharad Pawar. 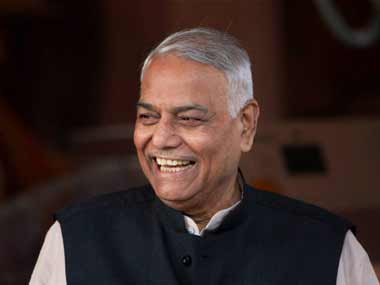 New Delhi: Former Union minister Yashwant Sinha has emerged as the consensus presidential candidate of 17 opposition parties, including the Congress, the TMC and the Samajwadi Party, which met here on Tuesday to discuss the issue.

“We (opposition parties) have unanimously decided that Yashwant Sinha will be the common candidate of the Opposition for the Presidential elections,” Congress leader Jairam Ramesh said, according to ANI.

In the joint statement, the parties also appealed to the Bharatiya Janata Party and its allies to support Sinha as president so he can be elected unopposed. Sinha was a senior leader and later frequent critic of BJP till he quit in 2018.

Opposition leaders, who gathered at the Parliament annexe for the meeting convened by NCP chief Sharad Pawar to decide on a consensus candidate for the presidential election, agreed on Sinha’s name.

Sinha’s name came up after Pawar, Gopalkrishna Gandhi and Farooq Abdullah opted out of the race.

Banerjee has tweeted congratulations to Sinha, who earlier announced that he would leave the TMC – which he joined in March last year – to take on his role as candidate for the presidential polls.

Heartiest congratulations to @YashwantSinha ji for being chosen as the joint Opposition candidate for the upcoming Presidential Elections.

It is my firm belief that for all progressive parties who share the same vision for our nation, there could not have been a better choice!

“A time has come when for a larger national cause I must step aside from the party to work for greater opposition unity,” Sinha said, thanking Mamata Banerjee.

I am grateful to Mamataji for the honour and prestige she bestowed on me in the TMC. Now a time has come when for a larger national cause I must step aside from the party to work for greater opposition unity. I am sure she approves of the step.

These parties had also stayed away from the June 15 meeting convened by West Bengal Chief Minister Mamata Banerjee.