Beyond the bad blood between the JD(U) and the BJP, the Nitish Kumar government has been able to eke out a measure of progress for Bihar’s economy but it is far from impressive. 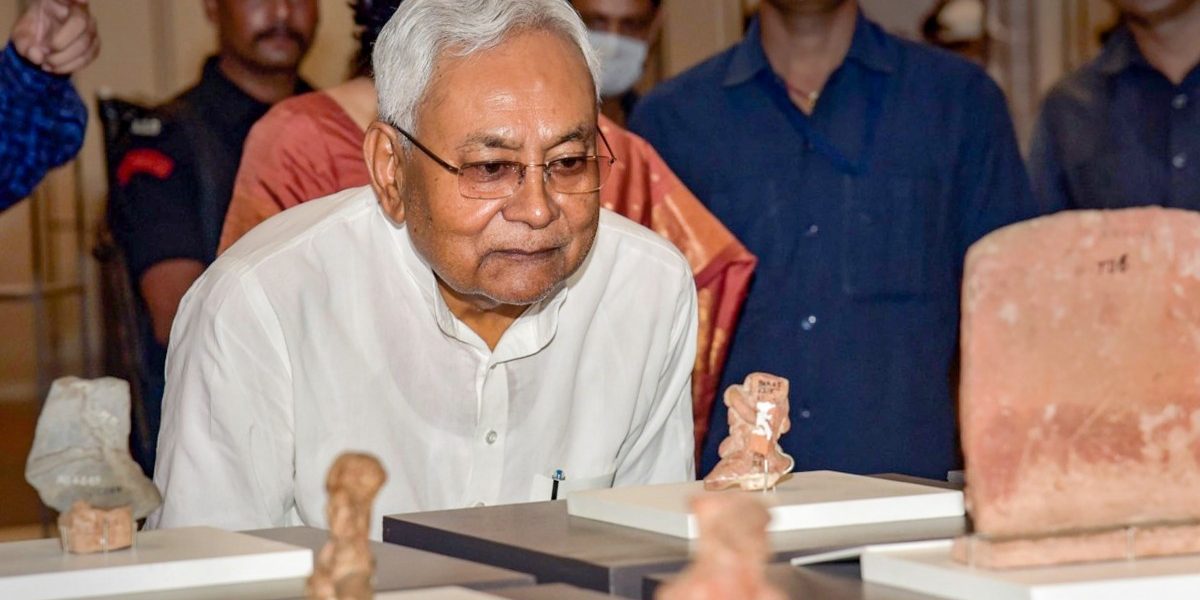 Mumbai: Bihar’s economic trajectory, over the years, could be conflated with progress if one were to accord it the luxury of a perspective that looks singularly at the distance covered till date rather than the miles that lie ahead, or the distance covered by other states. When seen in juxtaposition with other states, the state clearly lags behind as is evidenced by numerous reports of the NITI Aayog or state finances’ studies by the central bank.

However, this juxtaposition is, rather, unpalatable to the eight-time Bihar chief minister Nitish Kumar, who has, in the near past, voiced his grouse regarding the methodology adopted by the NITI Aayog.

The chief minister’s interactions with the NITI Aayog are quite instructive in this regard. Nitish saw red when the NITI Aayog released a report titled, Best practices in the performance of district hospitals in the second half of 2021, which slotted his government at the very bottom of the tally of states in their assessment of the total number of beds to population ratio.

Besides, in another report, the National Multidimensional Poverty Index, the NITI Aayog skewered Bihar on several parameters ranging from poverty, nutrition, child and adolescent mortality, maternal mortality, cooking fuel, school attendance, and years of schooling and electricity. This report further pummelled the Nitish-led government by chalking out that 51.91% population of the state was reeling from multi-dimensional poverty while a whopping 51.88% were deprived of the apt nutritional levels.

There was enough ammunition in the two reports to renew the vigour with which brickbats are often launched at the state’s economic performance. Reportedly, Nitish gave a vent to his feeling, even going to the extent of terming NITI Aayog’s way of functioning as “strange”.

“NITI Aayog’s way of functioning is strange. A single parameter cannot be adopted for all the states. Seen from the lens of the population, Bihar is on the third pedestal and from the lens of the total area occupied, it stands at the 12th position. In such a situation, if you assess the health infrastructure of a state from the metric of facilities spread within one square kilometre, the results are bound to be flawed. Everyone here knows the condition Bihar was in 15 years back,” the chief minister told Danik Bhaskar.

Relations between the NITI Aayog and Nitish Kumar have been progressively souring since September last year. The poor report cards dished out by the NITI Aayog have also contributed sizably to the rancor between the Janata Dal (United) and the Bharatiya Janata Party. In retrospect, a rupture between the two seems a foregone conclusion, considering that the chief minister had been repeatedly omitting meetings called by the Union government.

For instance, on August 7, the Bihar chief minister skipped the NITI Aayog meeting presided over by Prime Minister Narendra Modi. Earlier, on July 17, he opted out of a meeting of state chief ministers called in by home minister Amit Shah over the national flag. A few days after, on July 22 and July 25, Nitish made no time in his schedule for the farewell dinner for outgoing President Ram Nath Kovind (hosted by PM Modi) and the swearing-in ceremony for NDA presidential candidate Droupadi Murmu. 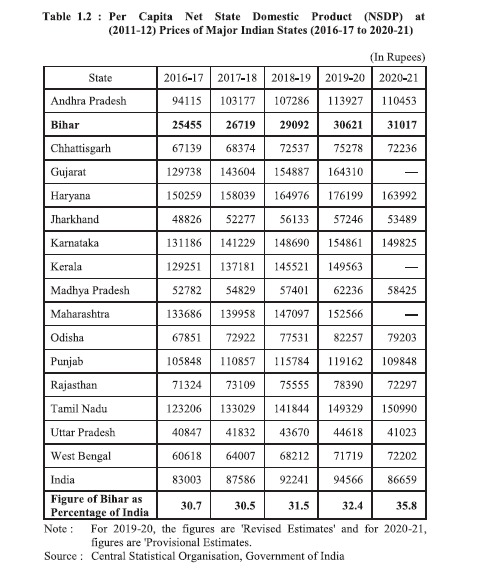 Can Bihar outgrow its slow pace of progress?

Beyond the bad blood between the JD(U) and the BJP, the Nitish Kumar government has been able to eke out a measure of progress for Bihar’s economy but it is far from impressive. Over the years, its revenue receipts have moved up from Rs 1.05 lakh crore in FY17 to Rs 1.86 lakh crore in FY21. Its capital receipts have zoomed up from Rs 21,600 crore to Rs 32,235 crore. However, at the same time, its capital expenditure, the kind of expenditure that creates assets like hospitals, roads, bridges, schools, etc. has been sinking from 7.5% of the GSDP (gross state domestic product) in FY17 to 5.4% in FY21.

Committed expenditure, which, inter alia, includes pension payments, interest payments and administrative expenses, accounted for a whopping 29.2% of the total revenue expenditure between FY18 and FY22. Meanwhile, its outstanding debt has been hovering in the ballpark range of 31-32% between FY17 and FY21.

However, there is still some light at the end of the tunnel. Bihar was an outlier during the pandemic years. At a time, when India’s GDP shrunk by 7.25% in FY21, Bihar clocked in a growth rate of 2.5% in the same fiscal.

In FY20, Bihar’s GSDP grew by an impressive 7.41% compared to India’s growth rate of 4.04%. Another parameter that bolsters chief minister Nitish Kumar’s argument that Bihar has been steadily progressing over the years is the NSDP or net state domestic product. NSDP is an indicator that serves as a counterpart to a region’s net domestic product and gives an account of the gross domestic product without accounting for the depreciation in a region’s capital goods.

While the rise in NSDP might be heartening, in the bigger picture of India, its NSDP was at the bottom-most rung compared to 16 other major states. The NSDP figure serves to re-emphasise the schism underlying Bihar’s economic arc, that is, the state has been progressing but its progress barely holds a candle to the pace set by other states. Bihar under chief minister Nitish Kumar has been registering incremental progress which can come undone sooner rather than later unless there is a fundamental paradigmatic change. Failing that, Bihar has several millstones that will hamstring its economic improvement.