'Minimum Income' in India Must Come Through Jobs, Public Services and Pensions

While the total costs of such a plan could be at most 6% of GDP, it would be far better for the country's future. 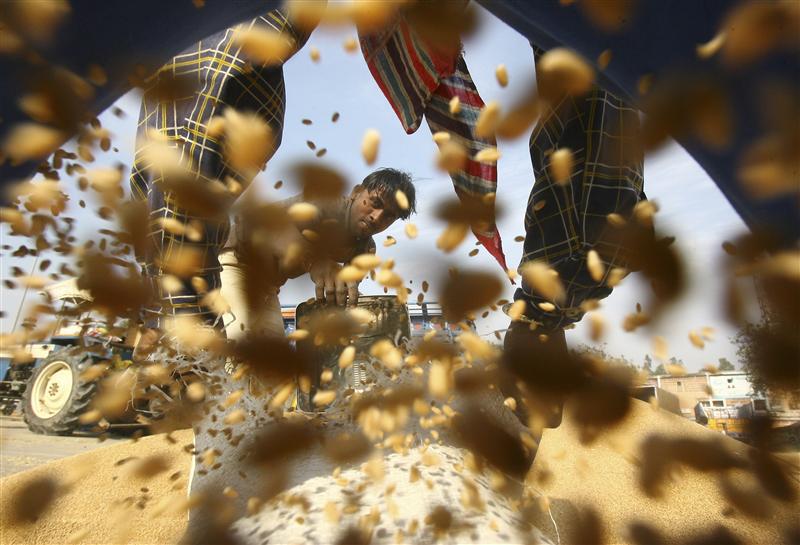 A labourer fills a sack of wheat at a wholesale grain market in the northern Indian city of Chandigarh January 27, 2011. Photo: Reuters/Ajay Verma

In several developing countries, cash transfer programmes have been the vogue for almost a decade.

In India, we have been late in catching up to this global trend – indeed we are catching up with it precisely at a time when many governments are recognising the difficulties with it and thinking of other ways to address problems of poverty, inequality and unemployment.

From cash transfers to farmers as applied in several states and now copied by the Narendra Modi government, to the proposed ‘Nyuntam Aay Yojana’ (NYAY) scheme just announced by the Congress party for the bottom 20% of the population, the idea seems to be that governments can improve conditions of life and work for their citizens not by providing public services, but simply by distributing cash.

The Congress’s scheme is laudable in terms of shifting public attention back to the urgency of policies to deal with those in extreme poverty. The basic principle of the government’s responsibility to guarantee all citizens a minimum income or standard of living is also one that definitely should be supported. But how best can such a goal be achieved?

The difficulties of a scheme like NYAY are obvious. Indeed, some have already been highlighted by the ruling government, which has itself done nothing for the poor in the past five years and has reneged on most if not all of its own promises to the people. The most important issues relate not to the overall costs, but to the problems of targeting and identification of beneficiaries, as well as the concern that this may lead to the reduction of other very important social spending.

But suppose we take up the spirit of the scheme, which is definitely worth doing, and consider a workable alternative to the current proposal. This is a combination of major policy moves in three areas, to provide the following: universal basic services, universal employment guarantee and universal pensions. These together have the advantage of avoiding all the concerns with targeting, of creating more employment of all sorts, and of providing a life with dignity for all citizens rather than a designated group.

Consider first of all an employment guarantee programme for all adults (not by household) in both rural and urban areas. The Mahatma Gandhi National Rural Employment Guarantee Act (MGNREA) already exists for rural areas, but it has been weakened by a Central government that has not released funds as required by the law. It should be expanded to cover every adult and strengthened by broadening the possible list of works to include all activities that improve the quality of life. A more significant measure would be the introduction of an urban employment guarantee. A relatively detailed proposal for this has already been worked out, and there are also models like that of the Kerala state government, that could be considered.

Public works undertaken in such an employment guarantee programme will rejuvenate urban civic infrastructure as well as create much needed public goods that reduce congestion and ecological degradation and restore the urban commons. Further, this will be an opportunity to work with local town governance institutions that have been bypassed or weakened over time. Similarly, given the changing nature of the labour force, the programme in both rural and urban areas should be extended to cover some forms of skilled work, with wages adjusted accordingly. A training element can be built into the project.

Universal basic services essentially refer to the range of public delivery measures that are currently hugely underserved in India. It is common (and also wrong) to talk about the poor quality of public service delivery in India without noting that it is typically very underfunded and understaffed. There are currently 24 lakh vacancies in the central government alone, and many more in state governments. These are not just administrators, but teachers, doctors, nurses, therapists, and those who make it possible for them to function. These staff shortages obviously affect the quality of service delivery, which is also hampered by the insufficient funds for enabling adequate infrastructure, amenities and facilities. Just filling these vacancies would significantly improve the quality of our public services, as well as increase aggregate employment.

In addition, major areas of public provision, in health nutrition and education, are sought to be met through so-called “voluntary workers”. The quality and effectiveness of the provision of health and nutrition services depends to a great extent on the work of more than 35 lakh frontline workers such as anganwadi workers and helpers and ASHAs. This number would be even larger if we included mid-day meal cooks, para-teachers (shiksha mitras), etc. These workers are in regular touch with the community and are the first port of call for information, support, referrals and much more.

The idea that these activities require little training is completely wrong: to function well, they have to be skilled and trained for their jobs. Yet, such workers are paid a fraction of minimum wages by the central government, and even with additions by state governments, they still receive much less than legal minimum wages. They should be regularised as government employees, with associated wages and social security benefits. Other measures will be necessary to enable these workers to be more effective in their work as well as towards making them more accountable towards the community.

Even with these, total public employment in health services in grossly inadequate. In this context, the promise by the Congress Party and several other parties to increase public health spending to 3% of GDP is greatly to be welcomed. This would also lead to significant increases in employment. Similarly, public spending on education needs to go up to 6 per cent of GDP as previously promised by all governments, but still not achieved.

Also read: The Time for a Minimum Income Guarantee in India Has Come

Universal non-contributory pensions are an important feature of a civilised society. The Supreme Court has recognised that there is a right to dignity and decent life of the elderly, and the state has responsibilities in this regard. The government should provide a minimum amount of monthly pension not less than 50% of current minimum wage or approximately Rs 4,000 per month to men and women above 60 years. The monthly pension amount should be indexed to inflation bi-annually and revised every two to three years in the same manner as is done for salaries and pensions of government servants.

No one should be forced to compulsorily retire from work on attaining the age of eligibility for universal old age pension; and the BPL criterion should not be used for exclusion. Individuals whose income is higher than the threshold level for payment of income tax and individuals who are receiving pension from any other sources that exceeds the pension amount under the proposed Universal Old Age Pension System may be excluded. If the NFSA criteria are used, this could cover at most around 75% of the elderly population.

The total costs estimated for all this come to at most 6% of GDP, roughly three times the proposed NYAY scheme. But it would cover a far greater population, provide better public services to the entire population and thereby reduce inequality, and generate much more employment both directly and indirectly through multiplier effects. Such multiplier effects also mean that rising incomes will raise tax revenues of the government, so that the net cost to the exchequer is likely to be significantly lower, in the region of 4.5% of GDP.

Even this is still a significant amount, and obviously some fiscal discipline should be maintained. But this should not involve cutting other expenditures, or “rationalising” them, as has been suggested, but raising revenues. To start with, the many tax exemptions that are regularly provided can be reduced to around half the current level – this alone will generate around 3% of GDP! A wealth tax can be re-introduced and if implemented properly even on only wealth over Rs 100 crore at a low rate of 1%, would generate an additional 1% of GDP. An inheritance of tax of 20%, which is significantly lower than in many other countries, including in Asia, would generate revenues of up to 1% of GDP. There are several other creative ways of raising resources with the right political will.

The expansionary effect of this combination of policies would be huge, since it would lead to a revival of demand and have significant multiplier effects that in turn would cause many more private economic activities to emerge and grow. So the employment problem, especially for youth at varying levels of skill, would also be addressed to a substantial extent. This would also lay the foundation for a more equal society with healthier and better educated citizens, and possibly reduce the simmering anger and resentment that has already led to so much social discord and violence. Of course, such policies could also have inflationary consequences, and this means that it is important at the same time to address systematically the problems in agriculture and ensure higher productivity of food cultivation and the viability of farming.

The NYAY scheme is important because it makes us all think again about how to improve the material conditions of the poor and also of the bulk of society. Surely a bold promise to move in that direction could capture the public imagination.