Is There a Conflict of Interest in a Prominent Goa Media House's Close Links to BJP?

The Fomento group, which owns several news outlets and is one of the mining giants in the state, has been among companies lobbying hard with the Goa government for old mining rules to be restored, say sources. 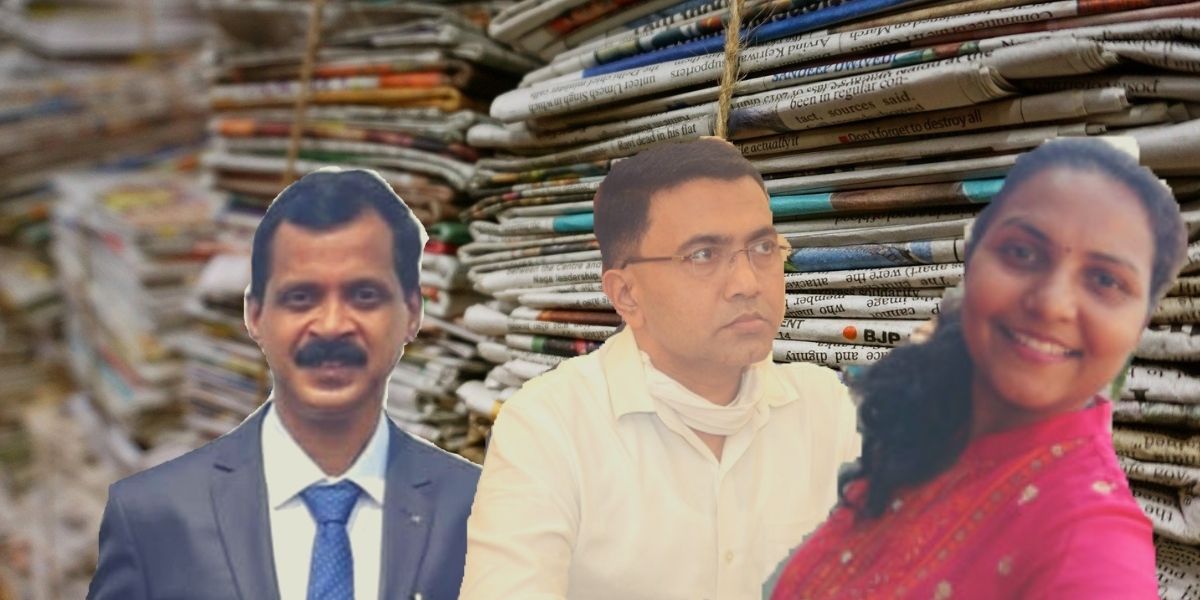 New Delhi: Even as Goa is caught in the throes of election heat ahead of the assembly polls early next year, political parties are wrestling hard to control the media narrative. Against this backdrop, close links between a prominent media house owned by one of the biggest industrial companies, the Fomento group, and the ruling Bharatiya Janata Party (BJP) have come to light.

Observers who wished to remain anonymous pointed out to The Wire that at least three episodes point towards the proximity between the Fomento Media – which owns the state’s English daily the Goan Everyday, news channels Prudent and Sindhudurg Live, Marathi dailies Goan Vartha and Bhaangarbhuin – and the BJP.

First, Sonia Kuncalienker, who was one of the directors of Prudent Media from 2007-2018, is married to former BJP legislator Sidharth Kuncalienker. The BJP leader first won from Panjim seat in 2015 when the then chief minister and BJP stalwart Manohar Parrikar joined the Narendra Modi cabinet as the Union defence minister. In the 2017 assembly polls, he defeated the influential Atanasio ‘Babush’ Monserrate to retain his seat, but only to vacate it for Parrikar again he was sent by the party to helm the Goan government again.

After the Panjim seat fell vacant in 2019 after Parrikar’s death, Kuncalienker contested as the BJP candidate against Monserrate, but lost. Kuncalienker is considered one of the trusted leaders of the BJP. He was a trusted ally of Parrikar and served as his officer-on-special duty for many of his electoral campaigns. Precisely because of these reasons, observers say, he was preferred over Parrikar’s son Utpal, who was also one of the contenders for the seat. 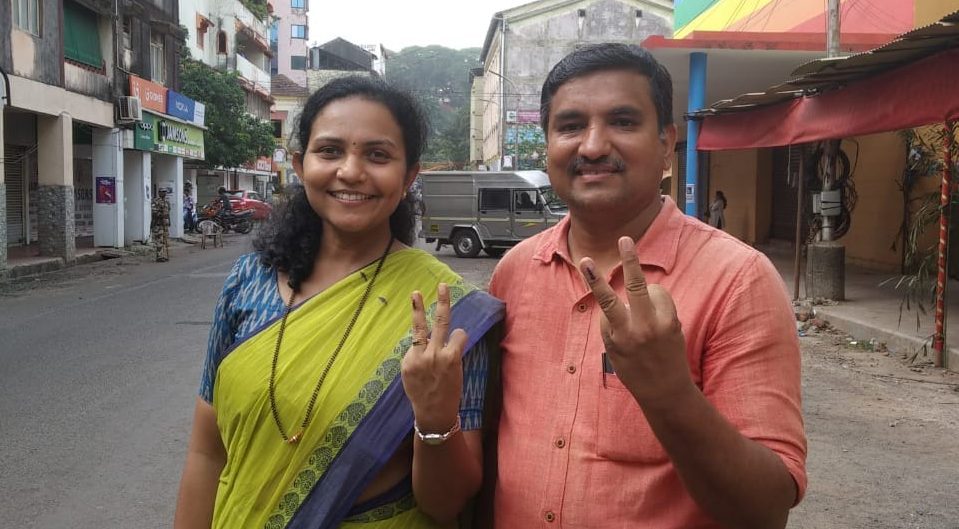 Secondly, early this year, the Pramod Sawant-led BJP government appointed Sanjay Dhavalikar as the state information commissioner. Dhavalikar was also one of the directors of Prudent Media and the editor-in-chief of Goan Vartha. His appointment as the information commissioner raised concerns about a conflict of interest as he was appointed only a day after he resigned from Prudent Media on February 4, 2021.

Thirdly, Prudent TV, widely considered to be the most-watched television news channel in the state, has been regularly inviting BJP leaders as chief guests to its various events. In 2019, the BJP Mahila Morcha (Women’s Front) state president and chief minister Sawant’s wife Sulakshana Sawant was called by Prudent Media to launch the ‘Diwali Ank’, the Diwali edition of the Goan Vartha and Sindhudurg Live’s magazine.

Similarly, Sawant himself has attended multiple Prudent TV events. Although it is not an exception for a chief minister to accept invitations from media houses, Sawant has been seen at Prudent TV’s most significant events, right from the beginning of his term. For instance, in November 2020, he inaugurated a new TV studio for the channel.

At the event, he said, “Prudent Media can partner with the government of Goa in our journey towards making an Atmanirbhar Bharat and a Swayampurna Goa by reaching out to every Goan in the state.” 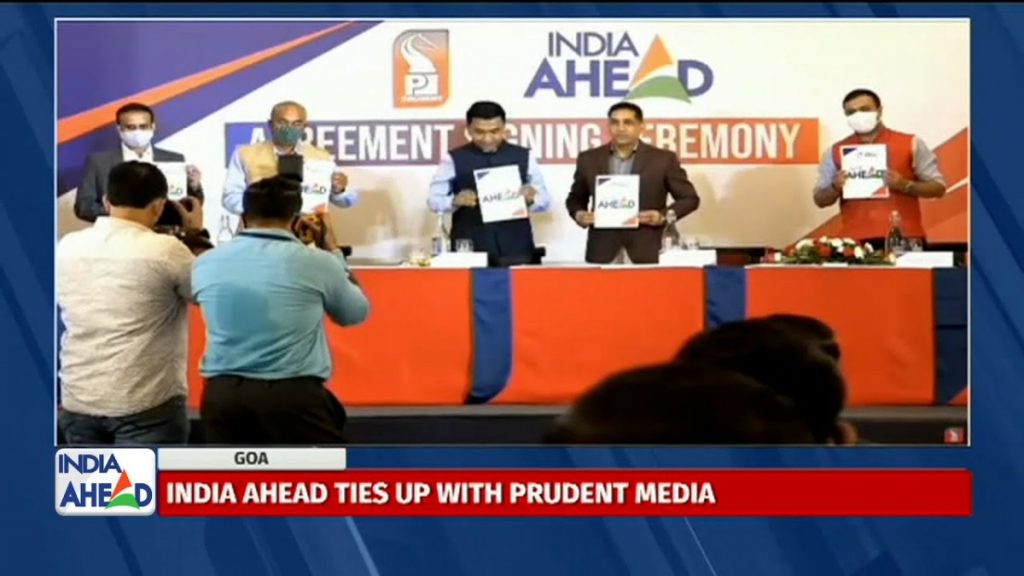 Sources say that the Fomento group has been using its media enterprise to advance its commercial interests, one of which is restarting iron ore mining in Goa – banned by the Supreme Court after it found multiple illegalities. The Fomento group, owned by Auduth Timblo, is among the top three mining giants of the state.

“In a political context where the BJP’s successful electoral run depends heavily on controlling the information space, especially television news channels, the relationship between Prudent TV and BJP can easily be construed as one of conflict of interest,” a political observer, who wished not to be named, told The Wire.

The Fomento group operates its media houses primarily through two companies – Fomento Media and Prudent Media. For instance, the Goan Everyday is run by Fomento Media which is a division of Fomento Resources. Prudent Media, on the other hand, controls the Prudent Live television channel.

In such a complicated company structure, Prudent Media’s own financial filings with the Union Ministry of Corporate Affairs throws up a number of questions. According to its 2017-18 corporate filings, Prudent Media had declared long-term unsecured borrowings of about Rs 29 crore, all of which came from Sociedade De Fomento Industrial Pvt Ltd, a top shareholder in the company. 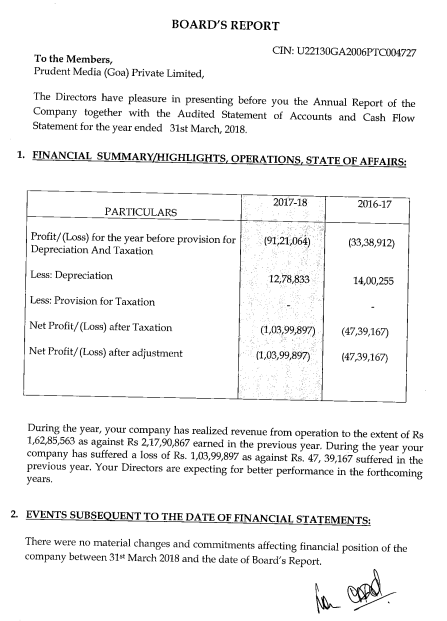 Page one of the company filings shows a loss of more than a crore.

The filings also said that Prudent Media incurred a cumulative loss of a little more than a crore and had liabilities worth around Rs 12.5 crore.

At the same time, Prudent Media also declared that it gave away short-term loans and unsecured loans of around Rs 10 crore to Fomento Resources Pvt Ltd, which is Fomento’s mining arm and also owns Fomento Media. 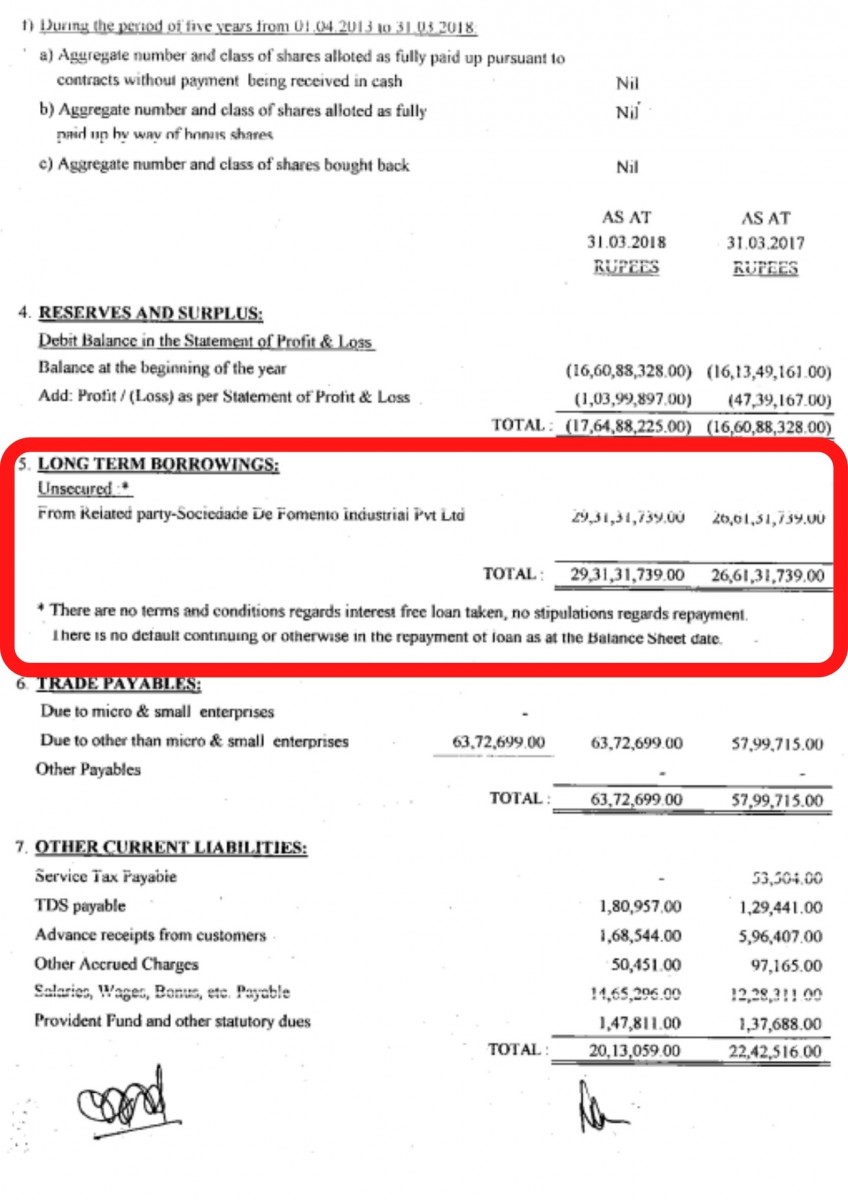 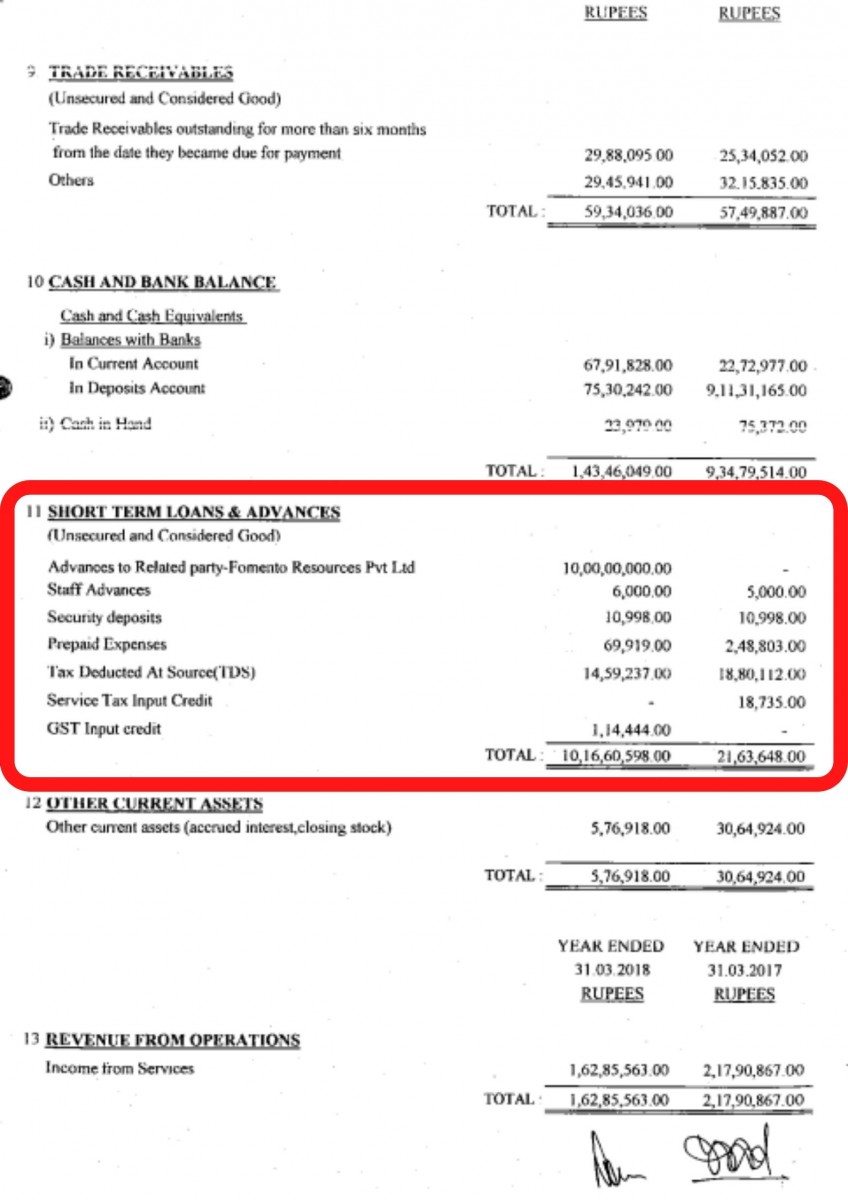 Now, one of the top 10 shareholders of Prudent Media is Dileep Verlekar, who along with Sonia Kuncalienkar was also a director of the company. Both resigned in 2018 but Verlekar remained a shareholder. Interestingly, Verlekar is an accounts manager, a post considered to be lower rung, in Fomento Resorts and Hotels Ltd.

In the past few months, the Goa state government has made multiple attempts to restore mining in the state but hasn’t spoken about implementing new regulations imposed by the Supreme Court in 2018. The Supreme Court has specifically said that mining leases will only be given through an auctioning process.

“It is believed that the six biggest mining companies, including Fomento, which almost controlled the majority of iron ore mining in the state before it was banned in 2012, have been lobbying hard with the state government to restore old regulations. In fact, despite the ban in 2012, the state government renewed all old leases in favour of these companies for a period of three years before the leases were cancelled by the Supreme Court again in 2018,” the political observer said.

In such a context, the association between the most-watched television channel in Goa Prudent and the BJP-led government may well be a contested topic.

The Wire has sought a response from Prudent Media about questions being raised about its association with the state government. The story will be updated if and when the response comes.

The turf war in Goa, meanwhile, has been growing intense by the day. The Aam Aadmi Party and the Trinamool Congress are indulging in an unforeseen poster war across the length and breadth of the state. The Congress is busy getting its house together by representing the most significant leaders from the state in its election committee – a move, many observers believe, aims to prevent further defections from the party. The ruling BJP appears to be focusing on dominating the media coverage.