Sudhir Chaudhary said he was "decoding" jihad for viewers and said everything from films, songs, land, media, history and education were being used as weapons to glorify Islam, promote Islamic culture and break up India. 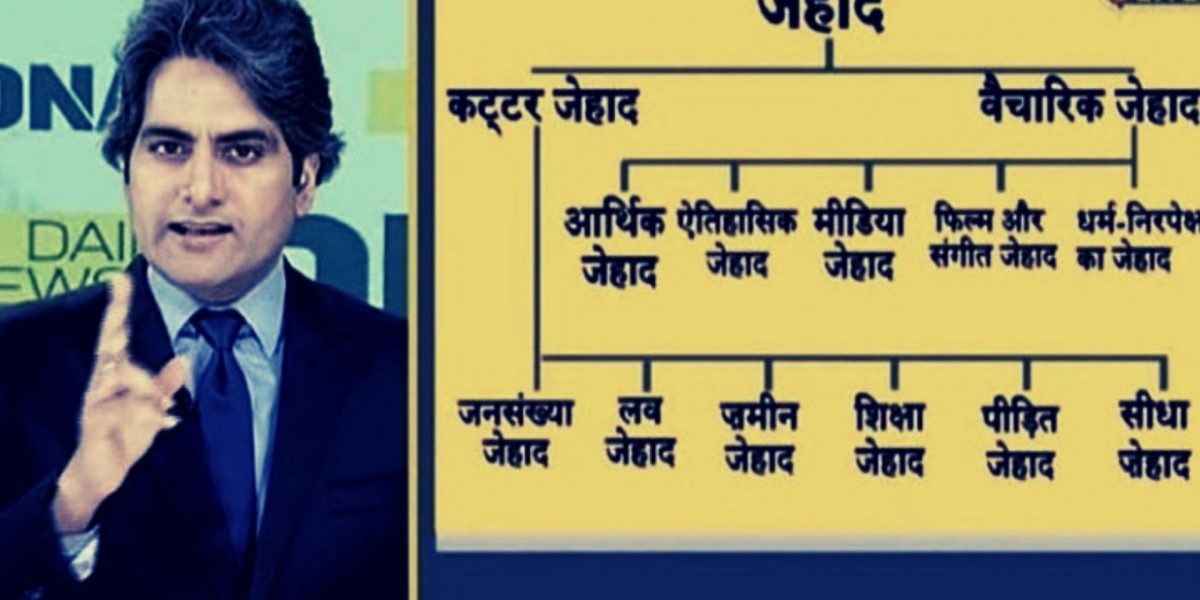 Kochi: A made-up chart on ‘jihad’ and his associated commentary on it have landed Zee News editor-in-chief Sudhir Chaudhary in trouble.

Although the inflammatory chart was lifted from a five-year old Facebook post, it is not for plagiarism that Chaudhary is in the dock. On Thursday, the Kerala police registered an FIR against the television news anchor for insulting Islam. The case was registered following a complaint by advocate P. Gavas, state secretary of the All India Youth Federation, an organisation affiliated to the Communist Party of India.

The FIR invokes Section 295A of the Indian Penal Code against Chaudhary for his show, which aired on March 11, 2020. The IPC section refers to “deliberate and malicious acts, intended to outrage religious feelings or any class by insulting its religion or religious beliefs”.

The show titled ‘DNA’ was anchored by Chaudhary and the complainant has objected to the segment on “Zameen Jihad”, or “Land Jihad”, which featured a chart listing what the channel claimed were various types of ‘jihad’ aimed at destroying India, such as “love jihad”, etc..

The term ‘love jihad’ was invented by Hindutva groups to promote the idea that Muslim men are plotting to seduce Hindu girls as a means of spreading Islam. Ever since attempts by the RSS and its front organisations to promote the use of the term across India failed, new conspiracy theories about ‘jihad’ have been floated by the right wing to promote distrust between Hindus and Muslims. These ideas have then been pushed on social media and picked up by a section of the big media. The latest of these terms is ‘corona jihad’. Last month, Chaudhari used his Zee News show to speak about ‘corona jihad’, to suggest the virus was being spread as part of some sort of deliberate plot involving the Tablighi Jamaat.

Gavas’s complaint, filed with the state police chief on March 18, alleges that Chaudhary’s show targeted the Muslim community, with the intention of sowing communal hatred and hostility.

The complaint, a copy of which is with The Wire, says the show falls foul of the restrictions placed on free speech in Article 19(2) of the constitution  and is punishable under sections 153A, 153B, 295A, 502 and 503 of the IPC, as well as section 66A of the IT Act – a provision the Supreme Court struck down. The complainant also alleges that the programme violated rules under the Cable TV Regulation Act of 2018.

However, the FIR registered by the police invokes only one section of the IPC – 295A.

What was in the ‘jihad chart’?

In his show, Chaudhary never explained who had drawn up the “Jihad chart’ he showed on screen. While its origins lie in Hindutva propaganda aimed at scaring Hindus and making them feel under siege, Chaudhary’s commentary treated the chart and its different forms of ‘jihad’ as some sort of manual that ‘those with impure intentions’ were actually following.

The meanings he gave to these invented terms, according to the English version of the chart which Chaudhary plagiarised and paraphrased, are as follows:

Economic jihad – use “business and trade to spread polarisation”.

Media jihad – “use paid media to speak in favour of Islam”

Secularism jihad – take the support of leftists, communists and liberals.

Land jihad – encroach on land and make mosques, graveyards and madrasas on them.

He presented all of these supposed types of ‘jihad’ as mandatory tasks – using terms like “karna hoga” – but mandatory for whom was never clarified. At the end of the segment, however, Chaudhary hastened to add that ‘jihad’ was a word used by those who had “napaak iraadey”, or impure intentions. “Those people, whatever religion they may belong to, if their intentions are not impure, they should not think we are attacking them … If you want to keep your country united and not destroy it, then this is not for you. It is for those who want to break up India, no matter what their religion”.

Gavas, in his complaint, not only called for action against Chaudhary but also for suspension of Zee News.

“That show he hosted was against the rule of law and the constitutional values of this country. In the guise of journalism, he was spitting communal venom against the Muslim community. The flow chart he presented is nothing but propaganda material that contains baseless allegations,” Gavas told The Wire.

He said he is also planning to file a complaint to the Ministry of Information and Broadcasting against the channel.

Chaudhary, meanwhile, tweeted a copy of the FIR and described it as a “Pulitzer Prize” from the Kerala Police “for reporting the truth”.

“The award for exposing inconvenient facts. A clear message for media. If u don’t toe the decades old pseudo-secular line you’ll be behind bars” Chaudhary said in a tweet.

Here’s my Pulitzer Prize for reporting the truth.Sharing the citation— an FIR filed against me by the Kerala police under nonbailable sections.The award for exposing inconvenient facts.A clear msg for media.If u don’t toe the decades old pseudo-secular line you’ll be behind bars. pic.twitter.com/zV3GvNg2YR

“We have registered a case on the basis of the complaint, the investigation is on,” said inspector Binu Thomas. “We will add more sections if required, based on the investigation,” he said.