James Augustus Hicky saw himself as the scourge of tyrants, the defender of free speech and the protector of the people. 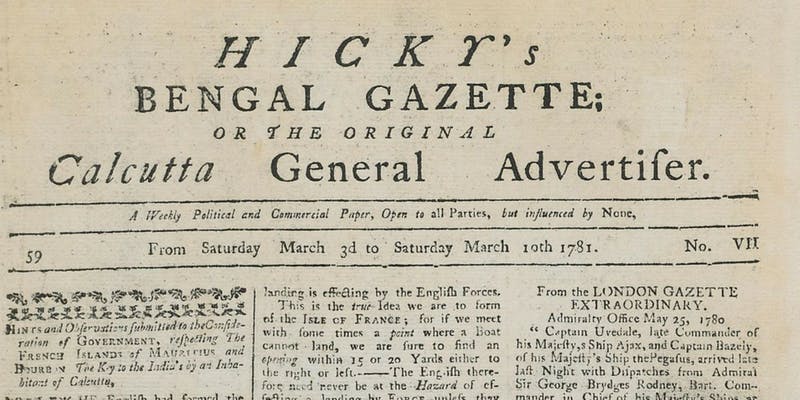 Mr Hicky asks no favours of the Great… he Laughs at their impotence, and promises the delinquents ample retaliation through the Channel of his Press.
– James Augustus Hicky, Hicky’s Bengal Gazette, April 14, 1781.

Hicky woke with a start, and stumbled over to his bedroom window. He peered into the blackness, bleary eyed and confused.

He heard yells and screams from below.

‘[What is] the cause of so much noise?’ he opened his window and yelled.

He saw figures running in the dark. Three men were trying to break into his house. Two were Europeans and had cut open the rope that held his back gate shut with curved knives.

He rushed downstairs. But the men had fled before he made it down.

He asked his servants who these people were.

They said one was Frederick Charles, the owner of a public house in the city, and Messink’s assistant at the theatre.

Hicky had bad blood with Charles. When he had practised medicine in his first years in Calcutta, Charles had once refused to pay for a surgery he performed. He had to sue Charles to get his money back.

Hicky pondered for a second. Why would these people break into his house deep in the night? Why would they wish to attack him?

Then, everything came together like pieces of a puzzle.

Behind Charles, he saw Messink. And behind Messink, he saw Hastings.

He was convinced it was an assassination attempt. Or, if not, at least a threat to silence him. He feared another attempt on his life, so he hired sepoys to guard his home and told his servants not to let anyone in without his express permission.

The warning might have scared some men, but it made him bold. If it was a warning to silence him, then he would do just the opposite. He was not intimidated. He would fight till every muscle in his body failed him rather than surrender his right to print. He became convinced he needed to wake the consciousness of the people and show them the tyranny they lived under. He saw himself as the scourge of tyrants, the defender of free speech, and the protector of the people. He saw himself as the only remaining hope against corruption and oppression. In a place where fundamental rights had been overturned and where the people lived in slavery, he believed that someone like him, someone with a free Press, might restore the people’s rights and redeem their freedoms.

Reflections in Consequence of the late attempt made to Assassinate the Printer of the Original Bengal Gazette.

Mr Hicky verily believes that fate decreed that he should come out to India to be a Scourge to Tyrannical Villains, and upstart Schemers … Mr Hicky is determined to go on and persevere … unawed by the frowns of arbitrary Tyrants in power (Men who wou’d sell their souls as well as the Country’s interest for Rupees) …

He is resolved to defend his Person in those attacks until every Muscle and Sinew in his Body fails him, and shou’d he be doom’d to fall a Victim to satiate the Malice of unprincipled Plunderers in power … Mr Hicky will fall contentedly, considering himself as a Martyr in Support of the property of his Countrymen, and in the support of the Liberty of the Press …

Mr Hicky considers the Liberty of the Press, to be essential to the very existence of an Englishman, and a free Government.

The Subject should have full Liberty to declare his principles, and opinions, and every act which tends to coerce that Liberty is Tyrannical and injurious to the Community. – The Press is the Medium through which opinions are disseminated amongst the People, (Vox Populi, Vox Dei) the voice of the People is the voice of God – It is the constitutional Censor and controller of Princes, the accuser of bad Ministers; and the most efficacious Machine to protect and shield the Subject from Tyranny and Despotism.

The Liberty of the Press is of such infinite consequence, that if the constitution was overturned, and the people involved in an abject State of Slavery, a Man of Spirit with a Free Press might soon restore the one, and redeem the other, and without it the bravest People on Earth, cannot long preserve their rights and Liberties.

Over the next few weeks Hicky’ writing grew hotter, just like the weather. He was no longer just going to point out despotism, he was going to call people to fight it. His next articles were his most extreme.

Two editions later, he published an article from someone written under the pseudonym, Cassius. Cassius told the Company’s troops that they should think twice before fighting for Hastings, claiming that Hastings ruled as if he were a king, and had no qualms about sacrificing their throats for his dreams of conquest. Cassius reminded the soldiers that their ultimate loyalty should be to the British people, not to this ‘Great Mogul’, and that if Hastings disobeyed the Company’s directors, then they should have no reason to obey Hastings. 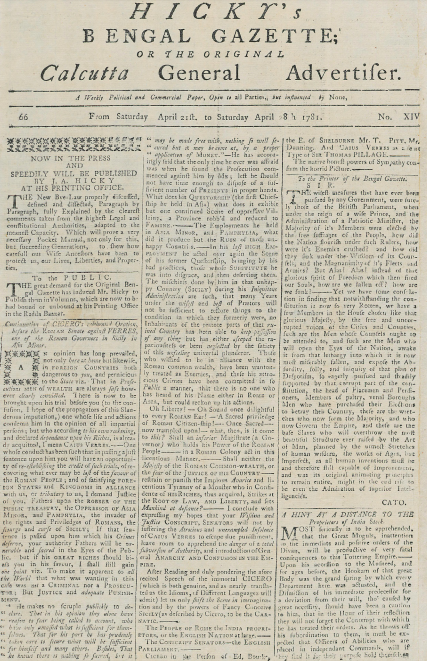 Even Cassius’ pseudonym was strategic. Cassius was the Roman senator who led a plot to kill Julius Caesar and restore the Roman Republic. The name itself was a warning: beware of those who wish to become Emperors. Cassius’s connection between Ancient Rome and Bengal was none too subtle. And his lesson was clear: rise up and overthrow Hastings before it was too late.

A hint at a distance to the Proprietors of India Stock.

Most seriously is to be apprehended, that the Great Mogul’s inattention to the immediate and positive orders of the Divan, will be productive of very fatal consequences to this Tottering Empire … As he throws off his subordination to [the Directors], it must be expected that Officers of Abilities who are placed in independent Commands, will if they find it for their purpose, hold themselves no longer answerable to a Government that he conducts as tho’ it was his by inheritance … Beware of a combination of the tendency of Lepidus, with Anthony, and Octavius, think of their proscription, and reflect that you have all of you Connections in this Country, that are more or less dear to you, whose throats are perhaps devoted to the wild Chimeras of a Madman.

The article brought Hicky to the edge of sedition. It suggested that the army mutiny and maybe even carry out a coup. It claimed that Hastings had forfeited the right to rule because he put soldiers’ lives at risk for dreams of conquest, sacrificing their throats to the ‘wild Chimeras of a Madman’.

Hicky had changed his role from being an advocate to a provocateur. His call for officers to question their loyalty was dangerous. The Company army had not always been not the most loyal institution. It had a history of mutiny, such as in 1764 when a European mutiny sparked a second sepoy mutiny that was only shut down by blowing the ringleaders from cannons. Just months ago, the sepoys at Visakhapatnam rioted rather than get on boats to join the war at Madras.

Hicky added another spark to the mix. His newspaper was a sounding board for the army’s subalterns, letting them and their comrades express their opinions. Emboldened by ideals of life, liberty, and equality, subalterns could use his newspaper to sound out a coup. A coup could end Hastings’ career, and possibly his life, in a single stroke. These were the risks Hastings faced if Hicky continued printing.

In article after article, Hicky’s contributors took on tones reminiscent of revolution. They proposed that the people should stand up for their rights, especially the right to free speech. ‘There’s nothing more sacred … than the liberty of the Press, I am persuaded that Millions would become as Martyrs at its Altars, the defence of it is a Cause of Glory,’ one wrote. ‘The meanest Subject of England … is as much Protected in his Life, Liberty and property, as the greatest,’ another wrote.458 ‘Priviledges are not to be invaded nor [the people’s] Liberties torn from them, without a noble Struggle and patriotic Opposition,’ a third wrote.

Yet, these articles only talked about revolt as an abstract concept.

One of Hicky’s writers was about to propose actual revolution. His writer, pseudonymed Britannicus, claimed that if the Company taxed the people without their consent then not only did the people have the right to fight back, they should fight back. If they had no other options, then at least they had revolt.

And, they had only one answer: revolution.

To the Inhabitants of Bengal, Countrymen and Friends …

I will not wrong either your Understandings or your feelings, by supposing you ignorant of, or insensible to, the oppression which now prevails; but I wish to inspire you with something more—to expose to you the weakness and inferiority of your oppressors. To lay before you your own comparative greatness, and to display to you your Power …

We have seen, and God forbid that it should be otherwise, that the People can and may assert and defend their liberties when directly invaded … The Spirit of the Constitution requires a full and fair representation of the People; on that, and that alone, depends the right of Taxation; if then the People are unfairly or imperfectly represented, or not represented at all, that Right falls to the Ground …

If the Spirit of Magna Charta is not quite Extinct [the people] will receive full Redress: but if Law and Justice are annihilated—If the British Constitution is destroyed from its Foundation—If Liberty is irrecoverably lost—Every Englishman should join in the Sentiment of Cato, Indifferent is my Choice to live or die.

‘Indifferent is my Choice to live or die,’—Hicky’s contributor reminded the public of the last words of Cato, the Roman senator who had fought for the Republic and fell on his sword rather than submitting to Caesar.461 The implication was clear: they, too, should fight for freedom. For if they did not, it would not matter whether they lived or died. All was the same under tyranny.

It was no longer about revolt against the idea of oppression in some distant place, it was about revolt here, now, at this very moment, against Hastings.

Excerpted with permission from Hicky’s Bengal Gazette: The Untold Story of India’s First Newspaper by Andrew Otis, published by Westland, May 2018.