What Chandrayaan 2 Taught Us About India's Media Landscape Today

Who knew there was suddenly a market for soft, civilised language and nuance in the age of brain-dead TV channels? 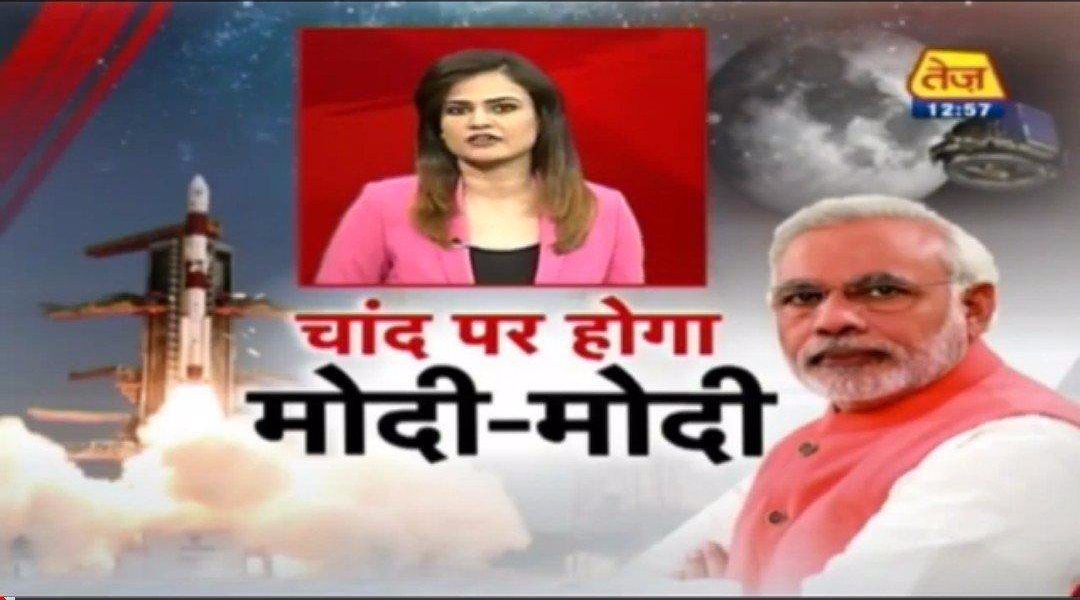 Not a single dawn sees its dusk in the social media age without the honourable members of the media inserting themselves into a story and putting up a cringeworthy sideshow, perfect for a future newspaper called The Daily Tamasha.

And so, in the year of the lord 2019, it is ISRO’s partially failed mission to the moon, Chandrayaan 2, which did not quite provide the desired opportunity for self-promotion for those who had flown down to its headquarters i.e. Prime Minister Narendra Modi.

As PMO speech writers tore up their chest-thumping drafts, and image managers had to quickly come up with a replacement photo-op (like the PM patting the ISRO chairman on the back 59 times), Aaj Tak‘s original hopes lay dashed. 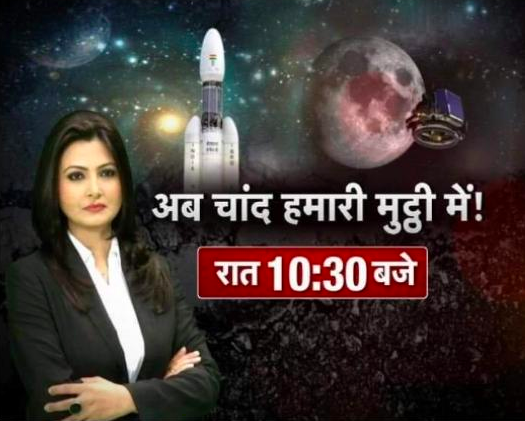 There is so much certitude in #NewIndia, so much certainty that the space programme began in 2014, that it seemed Rahul Kanwal of Aaj Tak hadn’t heard of the Challenger coming down.

Spoke to one of the senior most government officers yesterday. Had asked if PM was taking a risk by going to ISRO before Vikram lands. It’s more important for PM to be there in case things go wrong he said. Truer words couldn’t be spoken. PM did well to boost morale of ISRO team.

Hours before the Chandrayaan trouble, Deepak Chaurasia of News Nation was asking if India would be the first country to colonise moon….

…little realising the TV9 Telugu had already reached there and even lined up a panel discussion, which of course had to be cancelled due to technical reasons. 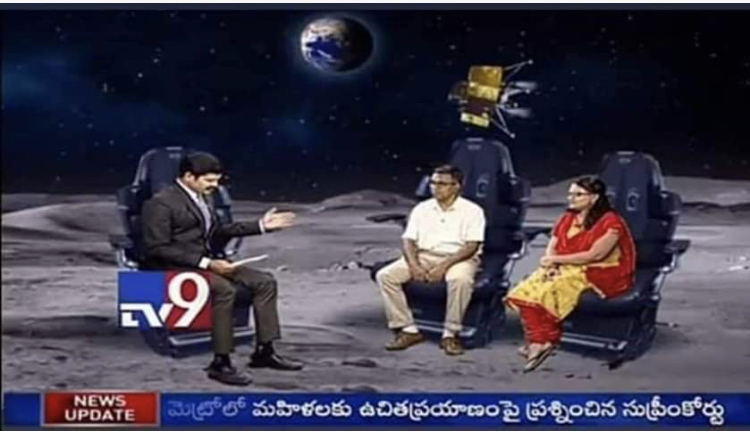 Unaware of fate’s unseen hand, Deepak Chaurasia had earlier in the night bravely revealed how he had prepared for the great day.

The Indian Express had to quick make changes to its front page, revealed its city editor Rahul Sabharwal. 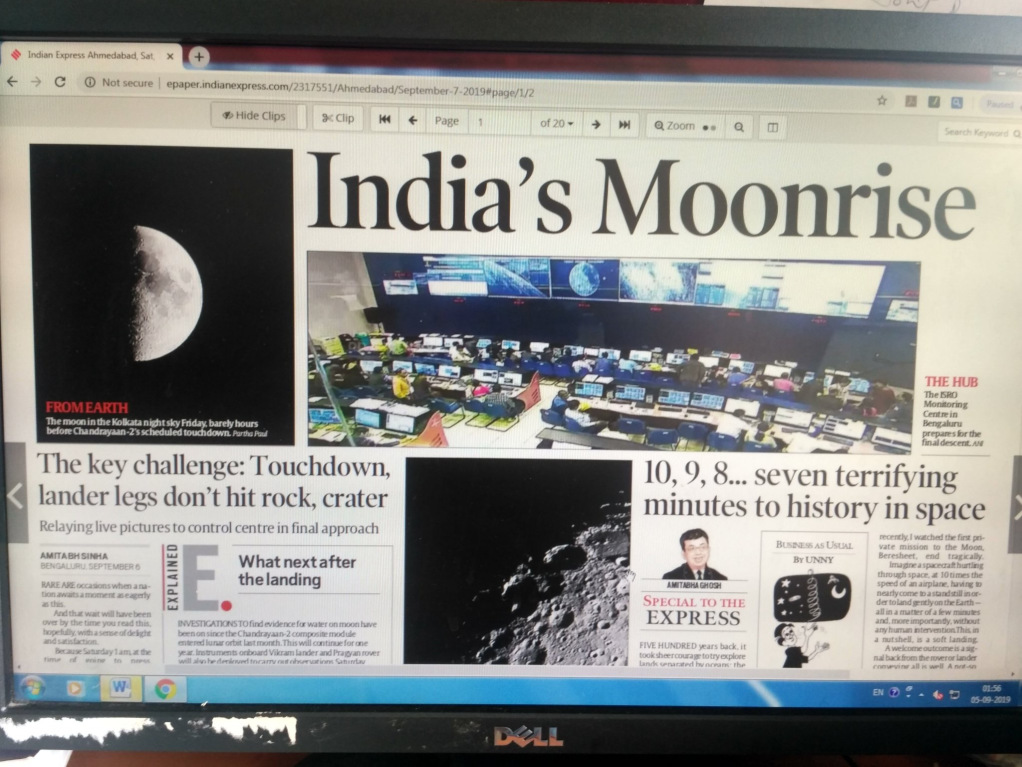 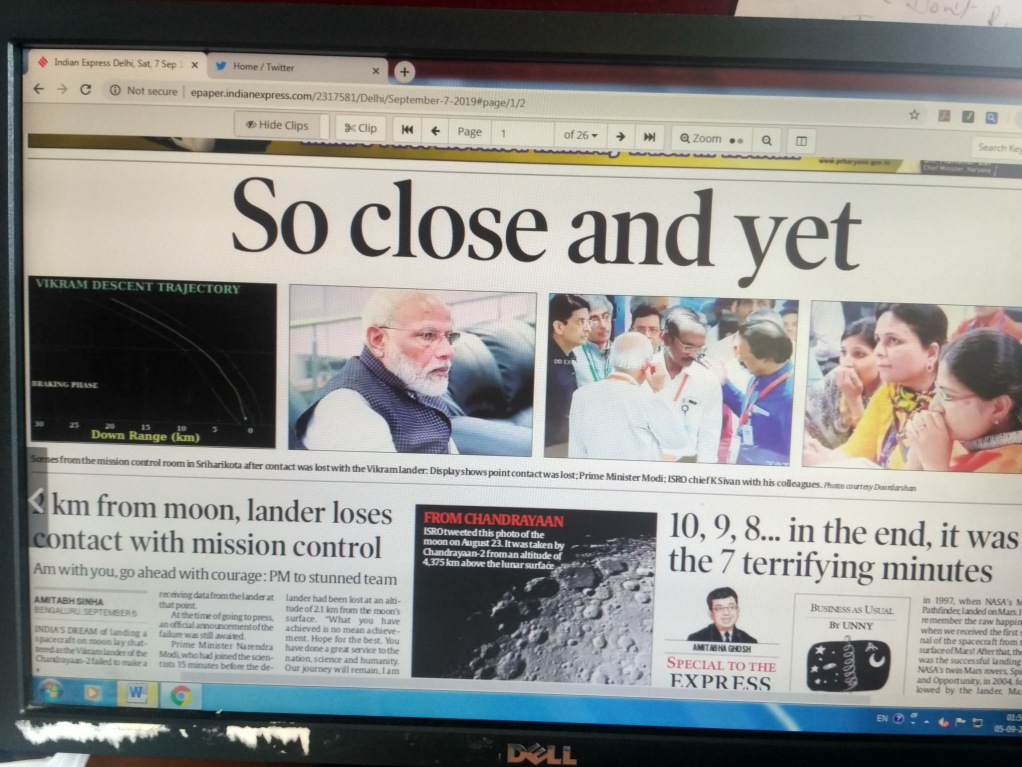 Which was certainly better than the Malayala Manorama two months ago, whose desk heads, so sure of black space just as they are of white, announced that Chandrayaan had taken off, locked their elaborately designed front page and gone home, only to realise that it was still on ground in Sriharikota and it was too late to shout “Stop, Press”.

But, of course, the day belonged to Pallava Bagla, the veteran science writer, who knows more about ISRO than most journalists put together.

Bagla did what political reporters have forgotten to do for the last 64 months: demand answers from the man at the top of the hill if things go wrong.

Thankfully, hours before the moon lander was to land, Bagla had taken his insurance certificate on Twitter, with a patriotic ‘cc’ to @PMOIndia.

This is where I am in spirit where Vikram & Pragyaan are heading. @isro @PMOIndia pic.twitter.com/n89IGio5Me

But at the press conference following the Chandrayaan disaster, Bagla did something that is not kosher in #NewIndia: ask a question and demand accountability.

It was loud, over the top, the tone a little too sharp, and perhaps the wrong moment, but only people who haven’t seen or heard Pallava Bagla would say that.

Then again, who knew there was suddenly a market for soft, civilised language and nuance in the age of brain-dead TV channels?

Also read: The Farther Away From Chandrayaan, the Pettier the Winds Blow

1/2 .. My sincere and heartfelt apologies to Mr D P Karnik, for having inadvertently raised my voice to ask a question in the media room last night. I have sought apologies from him personally and this is to let the larger community know I have tremendous respect for ISRO …2

2/2… I have tremendous respect for ISRO which I have often described as an ‘Island of Excellence’. Sorry, guys, my behaviour did not conform with my own standards or the organisation I work for. It wont happen again. Pardon me @isro

So did NDTV founder Prannoy Roy.

I agree. It’s absolutely sick. Yes, Pallava made a mistake, a terrible rude mistake and NDTV has said so. Pallava has apologised – sincerely. He has apologised to NDTV too. That’s it. Pallava has done more for ISRO & India’s science than all the ghastly trolls put together. https://t.co/gr1QkVtZxt

But that wasn’t enough for the burgeoning fauj of desk bhakts in the media, especially those whose covert and overt target is the battered and beleaguered NDTV.

Very sad @pallavabagla. You have such a grip of the subject but this “privileged” behaviour by journalists at pressers or otherwise is pathetic. https://t.co/eAoBiLpK4n

Next time keep media out of and away from @isro premises. You do not owe an explanation to media. Treat media boors as beneath contempt and unworthy of any attention. https://t.co/HvY3BQTFzL

The journalist in question is not chided for expecting to hear from the head of ISRO…..he is being criticised for the disrespectful manner & tone in which he spoke to the ISRO scientist. That was way out of line. https://t.co/nDUPb6NQrD

Not sure shouting in this manner was called for. Why? A heartbroken team of scientists, everyone saw what happened. It wasn’t some scam. Or corruption or public accountability moment. Pretty crass and insulting of ISRO in their moment of heart break IMHO

Agree absolutely with Barkha on this. Stunned that the reporter should be from NDTV. Sadly, the Arnab Goswami kind of jingoism seems to have become the norm and pervaded even sane channels. Shouting and insulting cannot be journalism or journalistic privilege https://t.co/MIwJbjIJqk

A few jumped in to support Bagla but in vain

Indeed, what @pallavabagla did was completely uncalled for. However, he has apologised. He is a very passionate man when it comes to science. At times a bit over the top. I am glad that he has apologised and realised the mistake he did. https://t.co/oojFMGFA5k

Lynch mob has got their target. कोई न कोई तो चाहिए daily outrage के लिये। This is an organised attack on @pallavabagla
He apologised, but that doesn’t seem to be enough.

This is a perfectly valid question. @pallavabagla is a journalist committed to science. To us former colleagues he is more of a scientist himself. The nation respects and salutes @isro but questioning is no offence. https://t.co/jhBwVuQreT

For one, it was time to rake up an old ghost.

2) Most of the journalists behaved obnoxiously. But Bagla was without a doubt the most obnoxious. It is said you can judge a person by how they treat less fortunate people. His behaviour towards the waiters at the different hotels we stayed was pathetic.

4) Whether it was at outdoor BBQs or at the buffets in hotels such as the Radisson, Bagla behaved like a complete lout. His appetite for meat and seafood was endless. It was as if he had never seen rich food. If his every wish wasn’t carried out, he would yell at the staff.

6) It’s been 18 years but I can’t forget the faces of those innocent waiters and Konkan Railway staff abused by Bagla. Media pontificates about human rights but after they put their pens down, they mistreat waiters, drivers, servants, peons on a daily basis. Hypocrites. (Ends)

But it is the response of journalists to Narendra Modi hugging the ISRO chief that got many teary-eyed.

I was going to write that PM shouldn’t have been there to watch the #Chandrayaan2Landing proceedings until I came across this adorable video. This video of a country’s PM comforting distraught chief scientist made his presence at ISRO so worthwhile. pic.twitter.com/1WqjjQb3wo

Failure is when you stop trying. Today is another morning which with itself brings hope and positivity. Success comes not to those who don’t fall but to those who get up after ever fall. @isro #ISRO #ISROMissions pic.twitter.com/JH6LugOtN5

It took a couple of them to point out the sheer irony of the hug and the humbug.

Reminder:
Communication was also lost with Kashmir a month ago.
Space is hard. Human Rights, not so much.

Since institutional memory in Indian journalism is not quite at its strongest, Rasheed Kidwai linked to a 1987 India Today story to show how Rajiv Gandhi, who too was at ISRO headquarters when the ASLV mission failed, reacted.

And Mrinal Pande, the former editor of Hindustan, pulled out a picture from the archives, on the ground with India’s first man in space: Rakesh Sharma. 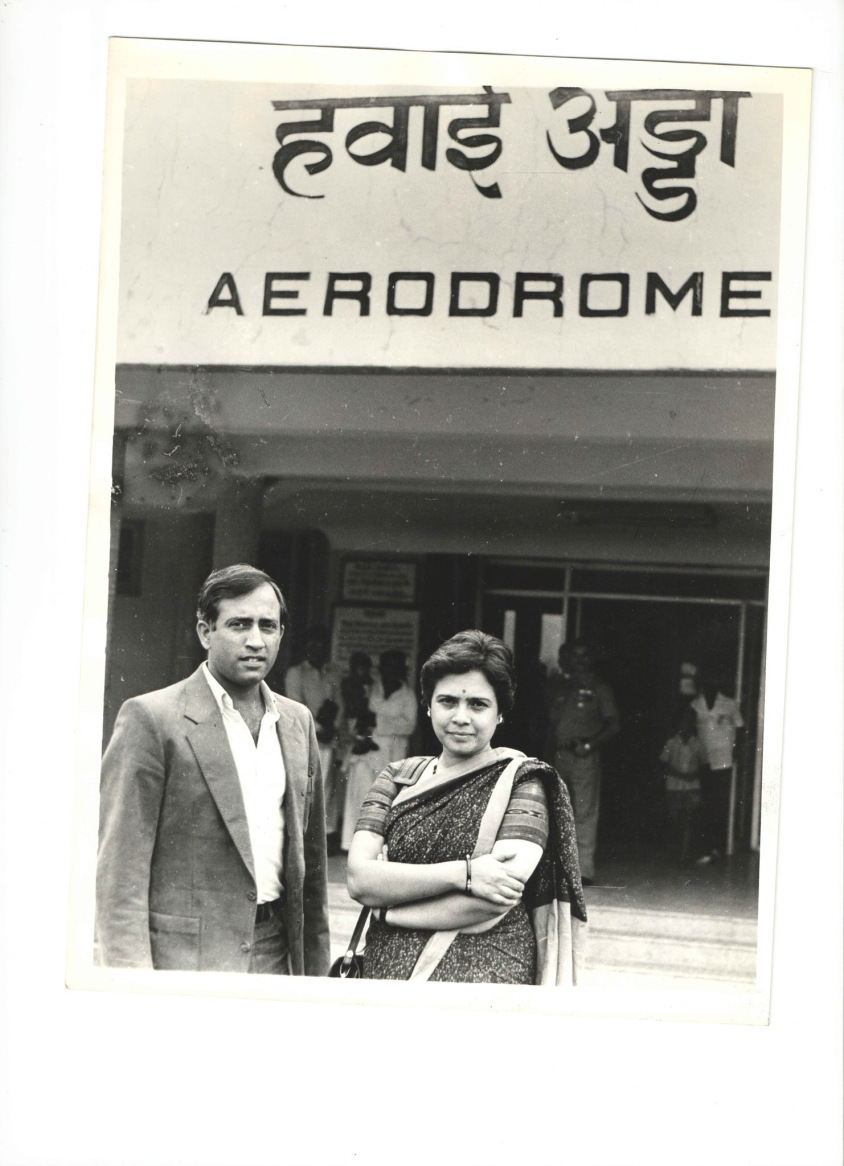 Also read: Why Chandrayaan 2 Was a Success Well Before ‘Vikram’ Got to the Moon

Indrani Bagchi of The Times of India wished the studio warriors of the commando comic channels god bless and god speed.

I hope all TV anchors have landed back safely from the lunar surface.

And back on earth, and back to earth, Aaj Tak had lunar advice for motorists driving in fear of the new traffic penalties. 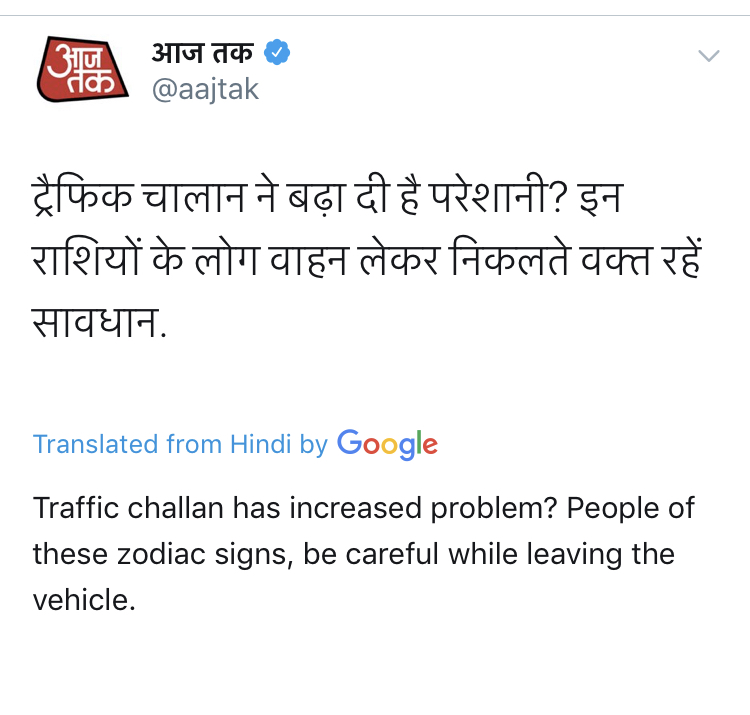 Note: This article was edited at 12:40 pm on July 21, 2020, to replace the first image, republished as-is from the original but which was later flagged to The Wire as being doctored.

This article was originally published on the Indian Journalism Review.