In Funding Hatred, India's Corporates Have Compromised With Evil

Public pressure and the boycott should extend also to those members of India Inc. who continue to support these channels with advertisements. 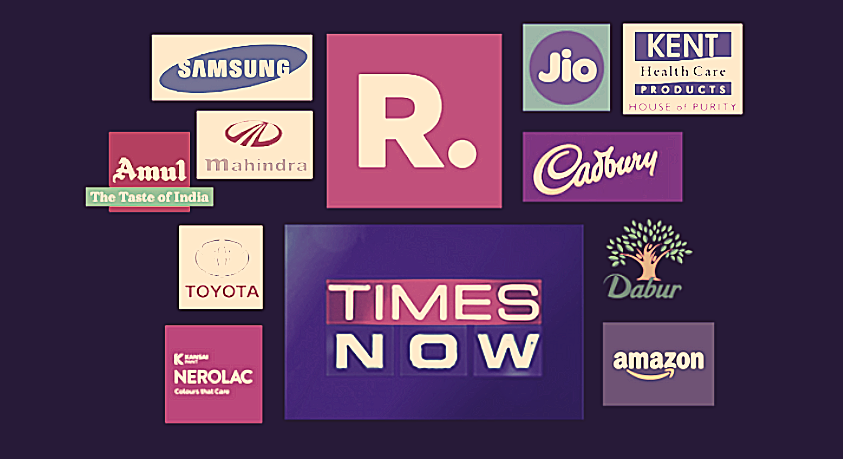 The logos of two news channels and some of the brands that sponsor them. Illustration: The Wire

Even for a country which is perpetually in outrage mode, the brouhaha over the TRP scandal “takes the cake, if not the bakery,” as a colleague of mine who knows a thing or two about hot spots would put it.

Experts – lawyers, advertising gurus, doyens of journalism, film stars, celebrities – have been vocal about condemning something they all knew about (and did nothing about) for decades. And as usual with TV experts, they have got it all wrong.

The likes of Arnab Goswami, Rahul Shivshankar and Navika Kumar will now stew in their own juice for some time, and one hopes the steaming will result in at least some of the toxins in them being flushed out. But they are not the only villains in the current TV eco-system of fake news, communalism and bigotry which masquerades as news in India today and which drives the TRP system.

They are like brainless, amoral viruses which know only one thing – how to replicate and amplify their hate. The real villains are the hosts who provide shelter and sustenance to these viruses, but nobody is talking about them.

I speak, of course, about their corporate sponsors, the companies which give them millions of rupees of advertising revenue, thereby enabling them to continue injecting their deadly poison into the social fabric of the nation. Hatred and bigotry gets TRPs, which in turn gets advertising revenue, which keeps this vicious cycle going. Without this money the cycle could not sustain itself.

These last couple of weeks I’ve been indulging in a bit of masochism, watching Republic TV and Times Now, something which makes me sick.

But I’ve been watching, not their programmes, but their ad breaks. The idea was to find out who their advertisers and sponsors are.

As expected, it’s a who’s who of Indian industry, a veritable rogues’ gallery of honchos who put money above conscience, perversely justifying something I’ve always noted, that in a sewer line it’s the muck that floats at the top. Here’s an illustrative list, compiled after hours of self inflicted torture:

These are the corporates (and others like them) which fund the toxicity, the hatred and bigotry, which our news channels spew out 24×7 and which has led to the TRP race. The total TV advertising spend is about Rs 70,000 crores every year, of which roughly 2% goes to the news channels.

TRP determines which channel will get how much of this Rs 1,400 crore pie and according to current ratings, most of it goes to Republic, Times Now and India Today, all three of whom are these days waging an incestuous family battle to apportion blame, reminding me of a sight I witnessed in Masai Mara many years ago – a pack of hyenas turning upon each other.

But this battle is throwing up enough of a dust cloud to conceal the culpability of our corporates.

Why do these companies continue to fund these renegade channels? Surely they cannot be unaware of the toxic and divisive content which is the mainstay of these channels? A corporate entity has the same legal rights as an individual, surely it should then have the same moral and social duties as an individual – to condemn immoral ideology, to abjure hate and communalism, to not incite one community against another, to distinguish between the truth and falsehood?

And yet our corporates are blind to these responsibilities, just so long as they can get maximum eyeballs and continue to get a healthy return on investment. They are not bothered about the real return on their investment – a society and country being torn apart by the channels they fund.

Our corporates aspire to be global entities but fail to espouse global values. In the developed world, companies are increasingly taking positions on tech and media platforms that spread fake news and incite hatred or violence.

Facebook has been boycotted by the likes of Adidas, Diageo, Ford, Honda, HP, Hershey’s and Coca Cola. Inexplicably, however, in India these same companies continue to do business with sections of our electronic media which are even more toxic and strident than Facebook. What is missing here is perhaps the pressure of a more active civil society.

All responsible companies should boycott these venomous channels and civil society should mount pressure on them to do so, or face a boycott of their own products. A stirring of their conscience appears to have begun – just last week Bajaj and Parle announced that they will no longer advertise in some of these channels or networks because, as Rajiv Bajaj stated, “I do not want my children to inherit an India built on hate.”

Brave words, but then he is not known for mincing his words. The French car maker Renault has also been boycotting Republic TV and its Hindi mutant since May this year. But it did not do so out of any pricking of its conscience, but because of a campaign launched in France by Indian Alliance (a group of diasporic Indians) with the hashtag  #RenaultFundsHate. The crusade was joined by Stop Funding Hate, another activist group in London, and by the French chapter of Sleeping Giants, a US based group which has been responsible for as many as 4,000 companies withdrawing from Breitbart, a channel which is Donald Trump’s preferred purveyor of hate and racism.

Unfortunately, the good work of these corporates has been somewhat undone by the Tatas and Tanishq this week by their withdrawal of an ad promoting inter faith marriage.

Also read: Protests Against Tanishq Are Not About the Ad, but Something Much More Sinister

This mighty conglomerate did not have the spine to stand up to the communal trolling for even one day! This supine surrender will only encourage the religious maniacs to further intimidate anyone who stands up for religious harmony.

Notwithstanding his tall claims to philanthropy, Ratan Tata always knows which side of his bread to butter, and this is usually the winning side. His action in not standing up for his convictions, along with the fact that his group continues to fund these toxic channels, has demolished all the principles that his predecessors stood for.

But I’m still hopeful that not all of Indian industry belongs to the invertebrate genus and that more will follow the example of Bajaj, Parle and Renault.

The lesson which emerges from the TRP implosion, therefore, should be that it is not only that channels like Republic and Times Now should be boycotted, but that the pressure and the boycott should extend also to those members of India Inc. who continue to support them with advertisements.

For corporates, too, are citizens of this country and should be judged as such. It’s bad enough for them to cosy up to the government, but must they also jump into bed with bigots, mercenaries and fanatics? Surely, there are better ways of making money than by pandering to the mob on prime time TV.

Our captains of industry may do well to harken to the words of John Ruskin: “You may either win your peace or buy it; win it by resisting evil, buy it by compromising with evil.”