During the protest, AOJ Chairman Subal Kumar Dey said that two teams of senior scribes recently toured different parts of the state and found that professional rights of journalists in the districts are violated. 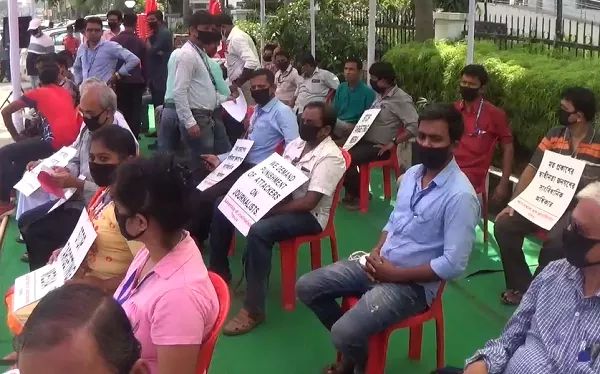 Media persons under the banner of the Assembly of journalists (AOJ) gathered in front of the Rabindra Bhavan here and held a sit-in.

“We will continue our movement until he (Deb) withdraws his comment, which is unbecoming of a chief minister,” AOJ Convener Sekhar Datta said.

Deb, while laying the foundation stone for a special economic zone at Sabroom in South Tripura district on September 11, 2020, had said that some newspapers are trying to confuse the people of the state about its COVID-19 situation and he will “not forgive” them.

This was construed as a threat to them by journalists who demanded that the CM withdraw it. Deb did not retract his comment but said he did not mean to threaten anyone in his speech.

During the protest, AOJ Chairman Subal Kumar Dey said that two teams of senior scribes recently toured different parts of the state and found that professional rights of journalists in the districts are violated.

“Journalists working in the district and sub-divisional towns are working under severe pressure. No government official wants to speak to them due to a gag order issued by the government and mafias are dictating how news reports should be published,” Dey claimed.

The AOJ had written to Prime Minister Narendra Modi, Union Home Minister Amit Shah and the Press Council of India, alleging that at least six journalists were assaulted since the CM’s September 11, 2020, statement, and despite complaints being filed, no progress in the investigation has been found in any of them.

Journalists had also met Governor R.K. Bais, seeking his intervention to end the alleged intimidation of journalists and held protest by wearing black badges on the Gandhi Jayanti.

Dey alleged that at least 25 journalists were attacked in the state since the BJP-IPFT government came to power in March 2018.