How Times Now, Republic TV Saw Muslim 'Appeasement' When There Was None

Apart from fuelling prejudices, the false reporting of the Congress manifestos by these channels has the potential to significantly shape public opinion in the run-up to voting day in Telangana.

According to the report, the Congress party has promised seven ‘Muslim-only’ schemes to woo the minority community voter base ahead of the Telangana assembly elections. The report further stated:

“The schemes are – free electricity to mosques and churches, special opportunities in government contracts for the Muslim youth, Rs 20 lakh aid to poor Muslim students, residential schools for Muslims, hospitals for minorities, special Urdu DSC (District Selection Committee) for minorities, and punishment to firms for hiring on the basis of religion.”

.@Paul_Oommen takes us through the 7 ‘Muslim only’ schemes pledged by Congress in its Telangana manifesto #CongForMuslims pic.twitter.com/YWWxDuLF4H

Republic TV too reported on the same narrative that the manifesto of the Congress party has promised seven benefits exclusively for Muslims and other minority sections in Telangana. The headline of the report read, “Congress On Appeasement Overdrive In Telangana: ‘Muslim Only’ Schools & Hospitals, Free Power For Mosques Promised”.

Republic TV editor-in-chief Arnab Goswami also reiterated the claim reported in the article by the channel.

#MuslimOnlyCongress | If a community is socially and economically backward in the state, we can talk about their empowerment: Shakti Singh Yadav-Spokesperson, RJD pic.twitter.com/gXXcOUqQ2F

Claim 2: Honorarium to Imams only

The manifesto says, “Pujaris working in 643 temples will be given salaries on par with State Government staff. Pujaris and staff will also get accident insurance and health cards.”

Moreover, it also states, “Honorarium will be given to Pastors and Fathers on par with Pujarais of Temple and Imams/Maozan of mosques.”

Goswami’s claim was based on point stated under the minorities section which says, “All Imams and Maouzans of mosques will be given a monthly honorarium of Rs 6,000.”

Republic TV and Times Now in their news reports, as well as Arnab Goswami in his debate have referred to the promise of Rs 20 lakh aid which will be given to the poor ‘Muslim’ (minority) student for ‘overseas education’. The coverage sought to represent this as a ‘Muslim only’ scheme whereas the manifesto states otherwise, with provisions for minorities, SC, ST, EBC and OBC students as well.

Republic TV’s news report states, “the minority youth will be given special consideration in the government contracts.”

However, the report has glossed over the promises made to the youth who participated in the Telangana movement, as also the pledge for 5% reservation in government contracts for SC, ST and other disadvantaged communities.

In his debate, Goswami also claimed that Congress has promised ‘Muslim hospitals’ in Telangana and the report published by the news channel stated, “Hospitals exclusively for Muslims will be established”.

The manifesto says, “Government Hospitals will be established in minority concentrated areas.”

Nowhere, it says these hospitals are only for Muslims as claimed by several news media outlets. The news reports are inconsiderate of the several other schemes which refer to hospitals pledged to be constructed in each Mandal and assembly segment.

The manifesto states, “Special Residential Schools will be established for girls belonging to minority community” but there are a slew of residential schools promised to other groups in the manifesto which have been overlooked, including provisions for visually challenged people and tribal communities.

According to the manifesto, “All kinds of discrimination on religious grounds in giving jobs in both public and private sectors will be stopped.” This provision of the manifesto has been painted as Muslim appeasement by Republic TV and Times Now, despite the fact that the language of the provision in the manifesto does not refer only to Muslims. “Strict action will be taken against those who refuse jobs in private sector to anyone on the basis of his/her religion”, the sentence itself mention no religion in specific but this was equated as Islam/Muslims because it was mentioned under the minorities section. Times Now reporter, Paul Oommen on air misconstrued the point by saying, “They will have to give employment on the basis of religion.”

Claim 8: Rs 5 lakh will be given to Muslims alone for construction of houses

The manifesto states, “Eligible minorities will be given Rs. 5 lakh financial assistance for construction of own house.”

Moreover, it also stated, “For SC, ST families, Rs. 6 Lakh will be given for the construction of their own house.” The party has also pledged assistance of Rs 5 lakh to eligible people for construction of house on their own land. There are 22 lakh individuals eligible to get a housing unit as per the Intensive Household survey.

Other media organisations and social media Moreover, the claims have also been echoed on social media. ‘Bharat Positive‘, a Facebook page with a huge follower base sourced the claims from Times Now. 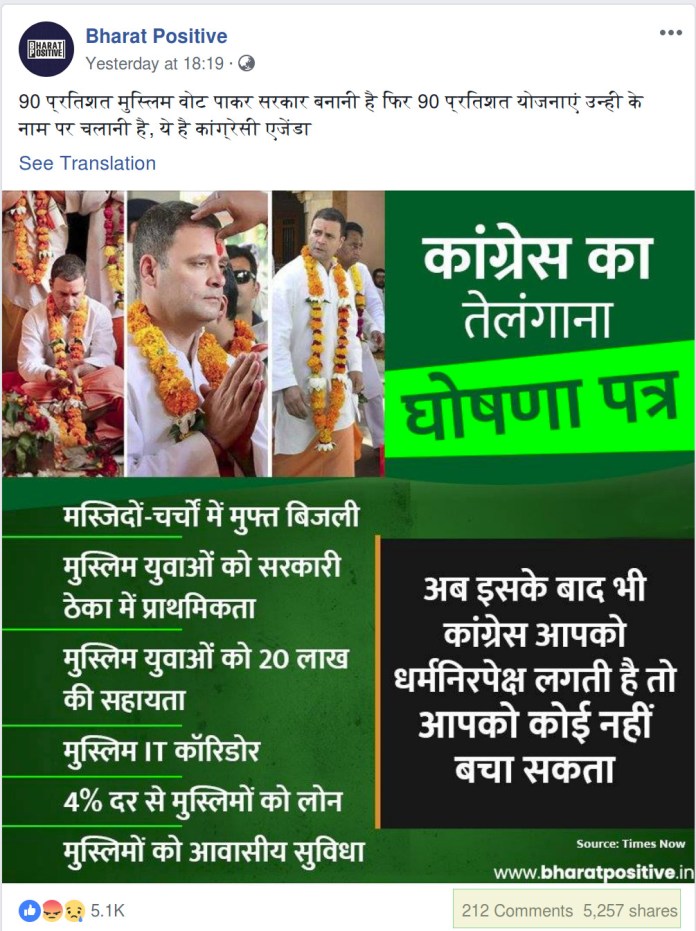 Rishi Bagree, who is followed by Prime Minister Narendra Modi on Twitter had also tweeted a video of the Times Now debate with an identical narrative.

Congress manifesto is awesome in Telengana

Telangana votes on December 7. With barely a few days left, the kind of reporting presented by Times Now and Republic TV has the potential to significantly shape public opinion in the run-up to voting day, apart from furthering inter-faith prejudice.

This article was first published on AltNews. Read the original here.