The Wire was recognised as "a leader in India’s digital news revolution and an unflinching defender of independent, high-quality journalism". 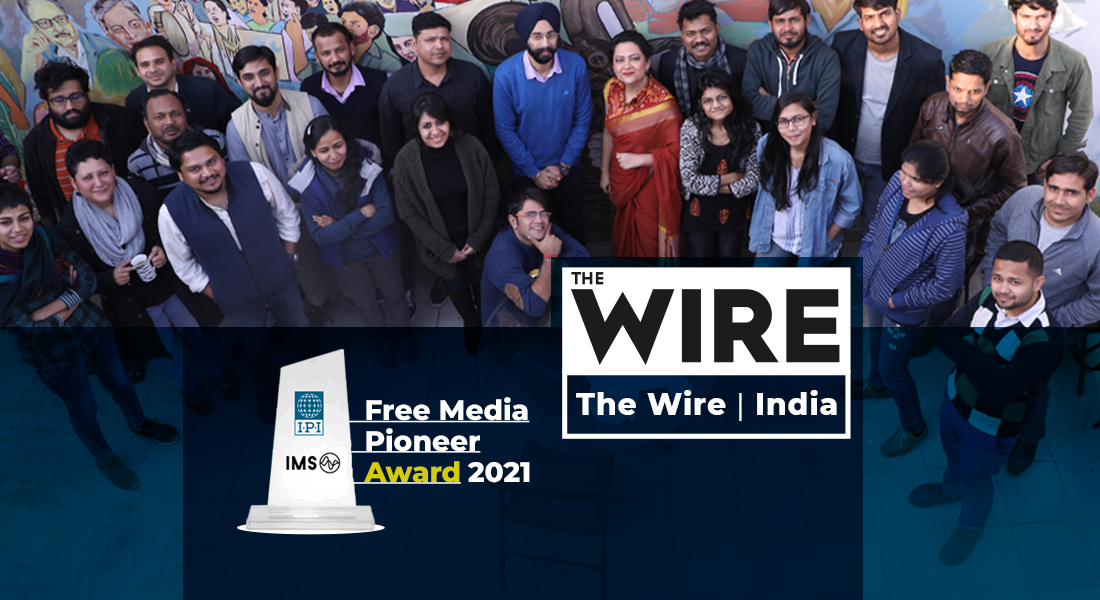 New Delhi: The International Press Institute (IPI) announced on Wednesday that The Wire has won the 2021 Free Media Pioneer Award, as “a leader in India’s digital news revolution and an unflinching defender of independent, high-quality journalism”.

“We are extremely proud to recognise The Wire as this year’s IPI-IMS Free Media Pioneer. The Wire is a leading force in India’s digital news transformation and its commitment to quality, independent journalism is an inspiration to IPI members around the world. We congratulate all of The Wire’s staff for their tremendous work in the service of critical reporting and press freedom, and stand with them in the face of increasing political pressure,” IPI’s executive director Barbara Trionfi said.

Founded as a digital news venture in 2015, The Wire built its success on reader support and independent, watchdog reporting.

Today, The Wire’s journalists continue their work amid growing political pressure on media in India. The IPI network stands with them.

The award will be presented on September 16 in Vienna, Austria, as part of IPI’s annual World Congress.

The IPI is a global network of media executives, editors and journalists, which aims to defend the free press globally. The annual Free Media Pioneer award was established in 1996 “to recognise media organisations that are innovating for better journalism and news access, or working to ensure freer and more independent media in their country or region”.

In the announcement about The Wire’s win, IPI talked about the threat and intimidation editors and journalists at The Wire have faced – including criminal cases, surveillance and more:

“Amid India’s press freedom downslide, The Wire’s commitment to public-interest news has also made it a growing target of government harassment. This year alone, three cases have been filed against the outlet and its reporters, including for their coverage of India’s farmers’ protests. In 2020, The Wire and Varadarajan were charged with “spreading panic” for reporting on violations of COVID-19 rules by religious leaders. The site previously faced 14 defamation cases by figures close to the ruling party requesting $1.3 billion in damages.

The pressure on The Wire and its journalists took an even darker turn this summer with the Pegasus Project revelations. The phones of Varadarajan and Venu were shown to have been infected with the Israeli-made spyware, presumably at the behest of the Indian government, while The Wire’s diplomatic editor was also on the leaked list of probable targets. The Wire was part of the collaborative global investigation, coordinated by Forbidden Stories, that uncovered the extent of government surveillance of journalists and human rights defenders using Pegasus.

The Wire has also been at the forefront of the battle against India’s new regulations for digital platforms, which grant the authorities increased powers to censor digital content. The Wire’s publisher, the Foundation for Independent Journalism, has sued to stop the rules, which, it says, represent an unconstitutional attempt by the state to tell the media what can and can’t be published.”

The Wire‘s founding editor Siddharth Varadarajan said about the award, “The Wire is thrilled to receive the IPI/IMS Free Media Pioneer Award. We have strived to deliver on our mission of providing high quality journalism to the people of India, free from the political and corporate pressures that beset most of the media in the country. We’ve paid a price for our independence, of course – defamation cases and now criminal charges for doing journalism, and of course difficulties in raising finances. But there is nothing like recognition from our peers in India and around the world to make this journey totally worth it.”