The Miracle of Radio 'Bultoo'

"It took me some time to figure out that the children were exchanging audio and video files employing Bluetooth available on their mobiles." 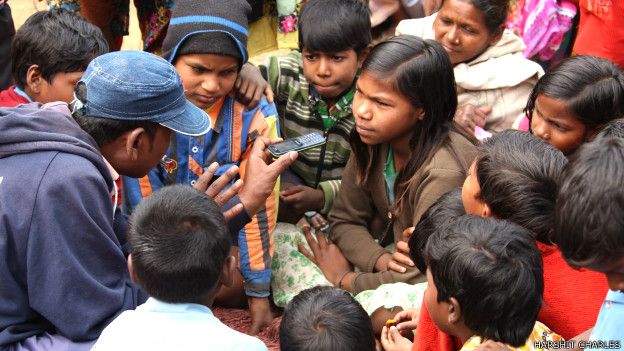 One winter’s morning, I found Adivasi kids of a village in Badwani district of Madhya Pradesh basking in the sunshine as they fiddled with their mobile phones.

The purpose of my visit was to train local people in citizen journalism. So engrossed were the children in their pursuit that they failed to notice me.

When I enquired about their activity, they replied that they were carrying out ‘Bultoo’.

It took me some time to figure out that the children were exchanging audio and video files employing Bluetooth available on their mobiles.

Though I had heard about Bluetooth, like most urban people, I had always depended on the easily-available Wi-Fi, and never had to resort to Bluetooth for transferring files.

Later, in class, I learned that in this Adivasi region, underdeveloped as it may be, about 80% of the residents not only have Bluetooth technology-enabled phones, but also routinely utilise it to transfer songs and films.

Just as city-dwellers are unaware of the importance of shortwave radio, most of them also underrate the value of Bluetooth. This technology can be a game-changer.

Optical fibre cable is gradually spreading to the gram panchayat level of some of the country’s districts. Balrampur, a Naxal-affected district lying on the border of Jharkhand and Chhattisgarh states, is one such, where by now, some 80% gram panchayats have access to broadband Internet.

But what use is broadband to people who can find little in their own language on it! For Balrampur district has a dominant population of ‘Oraon’ adivasis, who speak the ‘Kuduk’ language. Launched in collaboration with the Chhattisgarh government, the ‘Bultoo’ radio enables the rural public to use their ordinary mobile handsets to make their point in their own language, and to record their songs, on the internet. These are converted to Internet-based radio programmes and transmitted to all gram panchayats that have broadband facilities.

Every morning, one representative of each village visits their gram panchayat office to download those radio programmes onto their Bluetooth-enabled mobile handsets, and carries them back to their village for sharing them through Bluetooth, free of charge, with other villagers.

All messages and songs recorded in the district over the day, in languages such as Kuduk, reach every villager in this manner, free of charge.

Amardeep, a resident of Jhalpi village located 15 km from the district headquarters of Balrampur district, says “Although we have been using Bluetooth for a long time, we had no idea that it could be utilised to listen to messages and songs, in our own language, from community members residing in this district and its vicinity.”

Although Bluetooth Radio is still an experiment, Alex Paul Menon, the district collector of Balrampur believes that if people record their thoughts in their own languages and bring them to the notice of officers like himself through the Internet, then administrative work can definitely be improved.

This article was originally published on BBC Hindi. The translation by Anuradha Arjunwadkar first appeared in Vikalp Sangam.