The media is being called ‘lügenpresse’ by the right-wing, who accuse it of colluding with the government and sympathising with refugees. 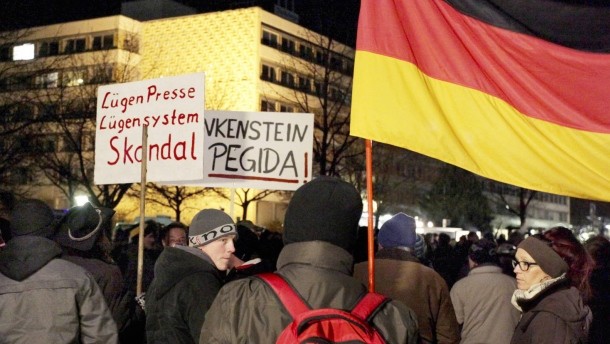 PEGIDA has been holding anti-refugee protests that are also critical of the media. Credit: Faz.net

Hamburg: Johanna Schmidt, 33, is a primary school teacher in a quiet, suburban neighbourhood of Hamburg. In the past year, the neighbourhood, like most parts of the city has undergone a momentous change. A refugee camp has come up not far from Schmidt’s home, and children from families of asylum seekers have been admitted to her school. They are, she finds, especially hardworking, more than children from other immigrant families. Schmidt embodies the much-touted German ideal of Willkommenskultur (welcoming culture) towards refugees. Her political opinions are liberal and nuanced, and are reflected in her choice of reading — the weekly magazine Der Spiegel and the Die Zeit newspaper. She is a regular viewer of the daily newscast, Tagesschau, by the largest public broadcaster in Germany, ARD. Schmidt trusts what she reads and what she watches, and does not believe that the press is lying to her; but in her circle of friends and family, there are a growing number of people who do. Schmidt represents one side of the debate that has sharply divided the country. The other side, smaller in number, but louder — on the streets and on social media — is convinced that mainstream media is lying to them.

“Lügenpresse” or lying press is a Nazi-era term that was used in Germany to criticise the free press during the first world war. It was revived in 2014 with the formation of Patriotic Europeans Against the Islamisation of the West, or PEGIDA, (a far right movement in Germany with roots in the eastern town of Dresden) and the rise of the anti-immigrant political party Alternative for Germany, AfD. Shouting “liar press” (which eerily echoes Minister of State of External Affairs V.K. Singh’s formulation for the press in India – “presstitutes”) at the media, accusing it of colluding with the government and sympathising with refugees, the neo-nationalists countered any criticism directed at them. But, they were on the fringe and easy to ignore. It was only in 2015, as the fear of terrorism spread through Europe and the steady trickle of refugees turned into a deluge, that the divisiveness in German society became more pronounced, along with a growing anxiety about the number of migrants and the troubling question of integration. The fear and loathing yielded huge electoral gains for AfD in the regional elections last month, finally waking up mainstream political parties to the threat presented by the far right.

“The idea of Lügenpresse has been coming from the right wing borders of our society, people who are against the way German politics dealt with refugees and the way that media engaged with this discourse, by saying it’s the duty of our civil society to help them become a part of our society. And a lot of newspapers and television stations took that stand,” says Carsten Brosda, state councillor for culture, media and digitisation for Hamburg, who works closely with the mayor in the senate. From the right wing, he concedes, the movement has been “growing more and more towards the middle of our society, with people saying (to the media) you’re not delivering objective news, you are trying to influence us in a way that is not right.”

The charge of the lying press really began to stick with the events on New Year’s Eve in Cologne and other cities like Hamburg, Frankfurt and Stuttgart. It was the turning point, a single night that changed Germany. When the story of mass sexual assaults first started emerging, the news spread like wildfire through social media, while mainstream media took time to pick up the story, particularly to report on the ethnic background of the suspects. The cautionary stance — explained later by the media on the grounds that the Cologne police took time to confirm the identity of the perpetrators — ended up playing right into the hands of those who had been ratcheting up noise about the press suppressing negative news about migrants on the orders of the government.

As the public sentiment turned against the policy of “Wir schaffen das!” (“We can do it!”, Chancellor Angela Merkel’s optimistic mantra for handling the influx of refugees), the debate it triggered led the media to a bout of serious self-reflection. In February, Der Spiegel, the most venerable media outlet in Germany, ran a story titled ‘Lying Press? Germans Lose Faith in the Fourth Estate’.  It quoted a survey by the Allensbach Institute, a polling firm, which found that only a quarter of Germans believe that the media paint a correct picture of the level of education, and share of women and children among incoming refugees. The piece drew a line between those who shout out “Lügenpresse” for political dividend and those who are genuinely critical or suspicious of the media, and how the distinction between the two is starting to blur. It revealed that German journalists have been verbally and in some cases even physically abused for reporting on the refugee crisis.

A free and fair media is one of the pillars on which a democratic society was constructed in Germany after the second world war. For the country to debate if the public is losing faith in the fourth estate is indicative of how deep the rift in society has become. A walk on the streets through Hamburg demonstrates the charged environment. Most graffiti in the city is largely positive and welcoming of refugees, “Kein mensch ist illegal” (“No one is illegal”, a campaign that spread from Germany to other countries) is found in large lettering in different areas of the city. But sometimes at stations, scrawled hurriedly, are racist or xenophobic comments against refugees and Islam.

To say that the press is under siege is not overstating the case. An editor at Der Spiegel divulges that the morale of the media is at an all time low. The Panama Papers leak (pulled off by the Munich-based Süddeutsche Zeitung), she says, presented a brief glimmer of hope by proving that good journalism can make an impact. But the recent case of television presenter Jan Böhmermann, likely to be prosecuted for his satiric poem on Turkish President Recep Tayyip Erdoğan, has become a flashpoint for German media and its right to free expression. At stake here, apart from Erdogan’s supersized ego, is the refugee pact with Turkey, which many suspect is the reason for Merkel kowtowing to Erdogan’s irrational demands. The incident illustrates in an extreme way how media influences politics and the course of events.

Journalists working on the ground confirm that their job has become tougher than ever. Jannika Schulz, a television reporter with RTL Nord says, “It is quite natural that every report is not fully objective. You always have so many options how to tell a story. I observed myself to be shy to write in my report, that the accused persons of the New Year’s Eve incidents in Hamburg were described as Arab-looking. I did not want it be a true fact, that refugees could be bad people. I was quite astonished to find that in myself. Then I realised my bias and wrote down what the fact was.”

On the other hand, there is also the fear of inadvertently supporting the cause of the extremists. Schulz confirms, “I always try to bring in all the different voices. But when I report on refugees I am extra careful about what I write, as I do not want to support right extremist thinking, and extra precise in my research.” The steady onslaught on the media has affected the way journalists go about their work. Brosda says, “This kind of criticism seems to have become a little more relevant than it used to be and really seems to attack the self-consciousness of journalists in this country in a way that forces them to re-evaluate what they’re doing, to try to find a new way of dealing with their responsibility towards society.”

Not surprisingly, the tenor of coverage on the refugee crisis has changed in the last few months. “The discourse before New Year’s Eve was influenced by Germany’s welcoming culture, the ‘Willkommenskultur’. After the events of Cologne, the media focussed for a period of several weeks more on the cultural differences between the refugees and the German population,” points out Steffen Burkhardt, professor of media and culture theory at the Hamburg University of Applied Sciences. According to some, it’s a self-correction that was overdue. The coverage has become less emotional and more fact-orientated, no longer shying away from talking about the problems and difficulties brought on by the refugee crisis.

In Germany these days, you are never too far away from a conversation on the refugee crisis and the role of the media. Every social interaction eventually leads up to this discussion. Stephan Samtleben runs a bookstore at Literaturhaus, a cultural institution in Hamburg and a pitstop for literary heavyweights like Jonathan Franzen and Salman Rushdie. A gentle and smiling man in the manner of most bookshop proprietors, he shakes his head when quizzed about the Lügenpresse debate. “I don’t share the political position behind this term,” he says. “I am not naive to think that there is manipulation by the press. I have to use information in an intelligent way for which I am responsible.” In a prosperous and progressive city like Hamburg, it is quite common to find people point fingers at East German cities from where the climate of hate has originated. Like the Nazi-era vilification of the press, this is yet another ghost from Germany’s past that has risen with the crisis, the polarisation of the East and the West.

The mistrust of the German public towards the media — visually depicted by the image of Pinocchio — is mostly limited to the reporting on the refugee crisis. Some of this at least, stems from the fact that German media, generally quite diverse in its opinion, universally embraced the refugees when they started coming in large numbers last year. Editorially, it has not been not possible to distinguish between say the centre-left newspaper Süddeutsche Zeitung or the centre-right Frankfurter Allgemeine Zeitung in their stance on the refugee crisis. Even the unabashed nationalist right-wing tabloid Bild Zeitung surprised its critics by campaigning for the refugees, points out Hans-Hermann Klare, editor on the foreign desk at the weekly news magazine Stern.

“Generally speaking I do not believe that German media is politically correct, or suppressing facts and figures that do not fit one’s idea of good policies or developments,” says Klare. “Our foremost task is to inform. The better we succeed the greater the chances that an informed public can have a real debate about the pros and cons of open borders and of the consequences of millions arriving.”

Despite the bleak times, the media cannot abdicate its role any time soon. It played a big part in the welcoming phase, by mobilising large parts of the population as volunteers and connecting them with refugees. In the days that lie ahead, there is more to be done, say the experts. “With the integration of so many refugees in Germany, not only is society responsible for a transformation, but media is an inseparable part of it,” says Susanne Marschall, professor of media studies at the University of Tubingen. “We must develop new TV programmes, new journals and magazines for the multi-cultural society in Germany. We need more journalists with migration background to understand the diversified nature of conflicts that face us.”

Sunaina Kumar is a Delhi-based writer and Medienbotschafter Fellow 2016