Tele-jingoism and the Tyranny of Hashtags

If television debates resemble gladiatorial contests, it is not an accident. Informed deliberation and debates cannot be settled in 60 minutes, and are thus not conducive to the mode of hector and holler on primetime television. 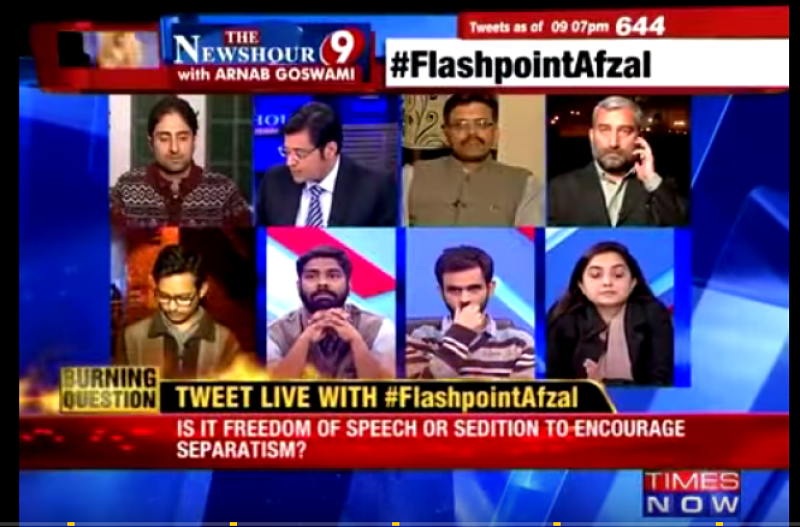 A screen shot of the Newshour debate on Times Now.

Freedom would be not to choose between black and white but to abjure such prescribed choices. ― Theodor W. Adorno

Recently, an investigative website revealed in an exposé that a former prime minister, senior BJP leaders and leaders from other parties were responsible for instigating the Ranvir Sena in Bihar. This should have been breaking news for television channels considering that the Sena, a private militia of upper caste feudal landlords, was involved in the massacres of Dalits, including at Laxmanpur Bathe and Bathani Tola. But this did not interest the news channels. One particular channel, in fact, did eight-nine programs on the Sheena Bora murder case at the same time as the exposé. Is it then ironic that the same channel, along with the others, were in the forefront of conducting a witch-hunt of the accused in the JNU sedition case?

Before the JNU events unfolded, anchors at the helm of these news channels had been subject to ridicule, but only on the fringes. After all, these channels have been dominating the television market and mocking them would not dent their popularity but only add to it. However, what the anti-nationalism/sedition debate has proved is that the time to laugh off the antics of these anchors is over. Instead, it is now time to consider the real dangerous effects they can have. No democratic or civilised society can function on the basis of news channels acting as lynch mobs.

‘The era of simulation’

It is significant that at last there is a concerted effort by many journalists to name and shame the networks and fellow media persons who have committed the worst forms of journalistic skulduggery. But this does not solve the problem, for the fundamental issue remains obscure: the deterioration of television is part of the larger degeneration of democracy. The crux of the matter is, privately-owned television — completely governed by the quest of profits — seeks to represent public interest, an irreconcilable paradox. Thus errant channels and anchors are only a reflection of the post-liberalisation privatised and corporatised mediascape of India, of why Sheena Boras are important but not Bathani Tolas.

We live in what the philosopher Jean Baudrillard called “the era of simulation,” in which screens and images play a crucial role. What television does is to reverse the relation between representation and reality. It does not merely reflect reality but constitutes a new reality, which Baudrillard terms as hyperreality – “The reality has been driven out of reality.”

Doctored videos, images and facts, or the primetime debate format itself are meant to constitute a reality of their own. Fox News in the US has been the number one ranked television news network for the past 14 years. An independent fact-checking website found that 60% of the facts reported by Fox in a four-month period until January 27, 2016, were untrue. That this does not seem to affect the popularity of the channel speaks of the dangerous crisis of our times. In a terrifying instance of the extent to which this hyperreality can be stretched, Fox claimed that there are Muslim only “no-go” zones in major European countries that are governed by the Shariah law, although the channel later apologised for the remarks. This whipping up of Islamophobia happened in the already tense atmosphere immediately after the Charlie Hebdo attacks in Paris by Islamist terrorists. The witch-hunt of JNU’s Umar Khalid by news channels even before the court’s verdict in the sedition case is exactly in the same domain.

The mask of neutrality

What television does in the age of hyperreality is to promote thoughtlessness; thinking is the greatest enemy of authoritarianism. If television debates resemble gladiatorial contests, it is not an accident. Informed deliberation and debates are not something that can be settled in 60 minutes, and are thus not conducive to the mode of hector and holler on primetime television. Every human problem is complex and beyond the straitjackets imposed by television sensationalism. Hashtags come in where democracy ends.

Thoughtlessness was fully evident in the recent “debates” on nationalism and dissent. Television channels see students as either misguided “children” or as criminals. Between these extremes, what is missed is that students are critically-thinking human beings. It is odious that instead of interrogating powerful narratives like that of the state, the media discourse mirrors it (the police had attributed students’ shouting azadi slogans to “youthful error”).

The attempts to control thought are usually associated with authoritarian regimes. But that would make the forms of thought control that exist in “free” and “democratic” societies opaque. A media that is steeped in capitalist ethos is in fact perfectly in sync with authoritarian values. As the cultural theorist Henry Giroux argues, “Totalitarianism, once visible in its manifest evil, now hides in the shadow of a market logic that insists that each individual deserves his or her fate, regardless of the larger structural forces that shape it.” Capitalism requires disciplined and regimented individuals pursuing the goal of profit at the expense of every other value.

Politics and the idea of the public good are the greatest hindrances to an efficient market society. In the recent media discourse, JNU students are not just “anti-national,” but are also political (a crime, for students who are only supposed to study), wasteful (a drain on public resources) and unproductive (do not contribute to society like students in professional courses like medicine and engineering). Ironically, the media, which is located in the private sector, believes that it is a neutral arbiter when it castigates a public university.

The perfidy behind this smokescreen of neutrality becomes evident once we examine the issues television concentrates on. Does television ever focus on corporate corruption? The head of the channels that was at the forefront of the media witch-hunt of the accused JNU students stated that the media has to adopt a “nationalistic approach” that “benefits the people of India.”

Why then do we not see television debates on the staggering amounts of money owed by the top private corporations to the public banks? The gross non-performing assets of these banks is around 3 lakh crore rupees, which is over four times the 72,394 crore rupees allocated to education in this year’s budget! Even when such stories are covered, it is on the easily targetable, lower-rung tycoons who are in focus. More importantly, the limited coverage reduces corporate corruption to a few “bad” capitalists and bizarrely blames the public sector for lending money to them. The nature or structure of corporate capitalism or the fact that the Indian state is capitalist is conveniently ignored.

Nationalism in the era of capitalism

Jingoistic nationalism goes perfectly in hand with capitalism; as Henry Giroux put it, nationalism is capitalism’s “apocalyptic underbelly.” Violence and militarism are glorified in this culture. Verbal violence in television studios is its mere reflection. Unsurprisingly, in the anti-nationalism/sedition debate the soldier is the mythical and the ideal figure that nobody can question; we are constantly asked to light candles for our soldiers. A commentator pointed out that if the death rate in the most dangerous occupation of cleaning sewers were to be applied to the armed forces, there would be 40,000 dead soldiers every year. But the “nationalistic” media does not ever ask for candles to be lit for manual scavengers from society’s lowest castes who perform jobs that nobody else can.

One television anchor recently blackened his screen to make us think about the dangerous realities manufactured by the media. While well-intentioned, this does not confront the nature of the beast, the structure of an increasingly corporatised television that monopolises airwaves, which are public property, and is inimical to everything that democracy stands for. A capitalist society does not allow the flourishing of an independent, non-profit media dedicated to the public cause. At the altar of TRPs, television sacrifices journalistic ethics with impunity.

A weak self-regulatory mechanism for television broadcasters means that there is not an iota of concern for the deadly consequences of the most dubious form of journalism, which can destroy lives. As Khalid’s father asks, “After the kind of profiling my son was subjected to, his image circled and him being projected as the most dangerous person in the country, can Umar have a normal life even if the court clears him?” The irony is that even when the most corrupt politicians have to face the ire of the public in elections, witch-hunting television anchors are not accountable in any way – the reason for their impunity.

Theodor Adorno had said, “If fear and destructiveness are the major emotional sources of fascism, eros belongs mainly to democracy.” Both jingoistic nationalism and capitalism thrive on paranoia and insecurity. A privatised media amplifies both. In the late 1980s, the telecast of Ramayana on state television led to the imagining of a new Hinduised Indian identity. Now, private television adds to this the logic of a carnivorous capitalism. It is time for the masks to fall off: the debating cauldron of a corporate-owned television studio cannot masquerade as the parliament of the people.

Nissim Mannathukkaren is Chair, Department of International Development Studies, Dalhousie University, Canada. He can be contacted at nmannathukkaren@dal.ca.