Sushma Swaraj won peoples' hearts with her open access policy on Twitter. Which is why her brittle response to an op-ed criticising her performance as foreign minister has surprised so many. Sushma Swaraj's Twitter diplomacy has earned her many accolades.

New Delhi: Ever since her appointment as India’s external affairs minister in 2014, Sushma Swaraj has used Twitter extensively to expand the scope of her ministry. Unlike her contemporaries, who only tweet about political engagements, achievements of the Bharatiya Janta Party and retweet Prime Minister Narendra Modi, Swaraj’s timeline is interactive, friendly and sometimes sassy.

Last year, the “supermom of the state” also earned herself a spot on Foreign Policy magazine’s list of leading global thinkers “for fashioning a novel brand of Twitter diplomacy.” When not busy rescuing stranded Indians at home and abroad, Swaraj is often seen indulging in friendly banter with her followers.

Brother I cannot help you in matters of a Refrigerator. I am very busy with human beings in distress. https://t.co/cpC5cWBPcz

Even if you are stuck on the Mars, Indian Embassy there will help you. https://t.co/Smg1oXKZXD

However, like all Twitter warriors, Swaraj, too, say critics, has a chink in her armour — an inability to take criticism in her stride.

On January 13, the Times of India carried an op-ed by policy wonk Sadanand Dhume criticising Swaraj. Comparing her to Atal Bihari Vajpayee’s foreign minister Jaswant Singh, Dhume claimed that despite being one of the most likeable figures in the ruling BJP, Swaraj’s tenure as a minister has been largely forgettable.

“In an increasingly complex world, India needs to stop treating the foreign ministry as a parking lot for veteran politicians with no obvious aptitude for the job,” wrote Dhume. Swaraj was quick to respond.

While Swaraj’s reaction to the critical op-ed wasn’t a surprise, the fusillade that followed was certainly not what most people expect from  one of the most powerful politicians in the country. 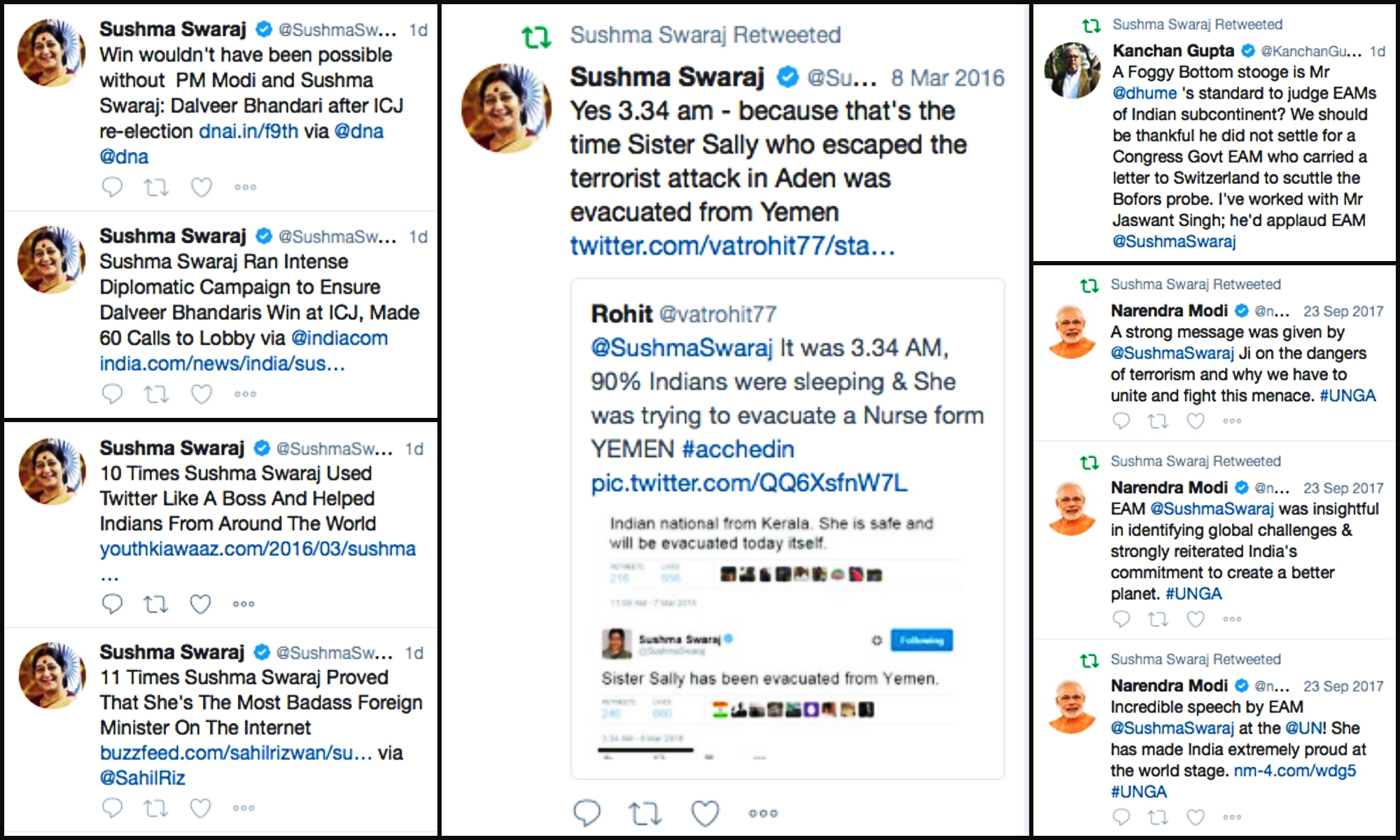 The foreign minister spammed her timeline by retweeting several old tweets of people applauding or thanking her. Apart from sharing a piece published by a right-wing propaganda website notorious for publishing fake news, Swaraj also shared old pieces calling her ‘most badass foreign minister’ and a ‘boss’.

The net effect was counter-productive:

.@SushmaSwaraj is so rattled by this @dhume piece terming her “mediocre” : https://t.co/dcCC1ZRM87 that she has gone on a relentless spree sharing and retweeting articles which are cloyingly sycophantic in nature. Shej has shared an article from fake news rag @OpIndia_com as well

Ironically, one of the positive pieces shared by Swaraj ends with – “We hope Dhume takes the criticism from social media users as well [as] the minister took criticism from him.”

The Streisand effect: Dhume’s editorial, which was only shared by a handful of people before Swaraj’s tweet, is now amongst ‘most read’ and ‘most discussed’ pieces on the Times of India website.

If you can’t stop them, block them?

Swaraj faced a lot of flak in 2017 for arbitrarily blocking accounts of people who criticised her on Twitter.

After 3 years in office, why isn’t she able to set up a system that works without the need of her intervention in every case? She appears to be more accessible to Pakistsnis than their own govt ??‍♀️

Achievement unlocked: Sushma ji blocked me thanks to people tagging her in replies perhaps ? https://t.co/eUdebMeBK7

Is this the way to run external affairs ministry?
Does it behove the office of Sushma Swaraj ji to block a Member of Parliament for asking tough questions on 39 Indians missing in Iraq? pic.twitter.com/CvYl8aLREF

The confrontation between the two leaders began in July when Swaraj gave a statement in the Lok Sabha that the 39 Indians who have been missing is Iraq since 2014 were lodged in a jail in Badush town of Iraq, reported Indian Express.

Twitter’s ‘Block’ feature helps users control how they interact with other accounts on the website. If Sushma Swaraj blocks a person, this means they can’t follow her or view her tweets, tag her in their tweets, search for her tweets while being logged in on Twitter, or see who is following her and who she is following.

So if a person blocked by Swaraj is in trouble abroad and needs the kind of consular help she excels in providing, they will have to rely on other means of communication. While there’s no law prohibiting Swaraj from blocking her critics, the drastic move does seem unfair as the minister uses her handle to help out people in distress and all Indian citizens (including those who don’t support her) deserve assistance.