Supreme Court's 'Intolerant Side': Newspapers Side With Prashant Bhushan in Contempt Case

Editorials in the English print media reflected a commitment to freedom of speech. 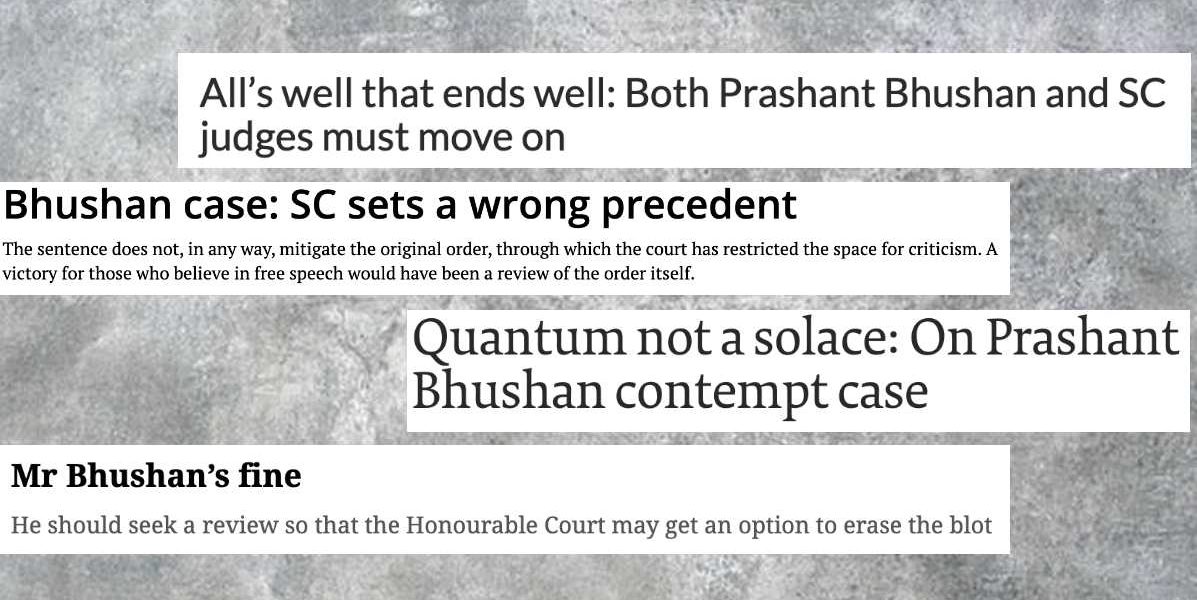 New Delhi: The English print media overwhelmingly has backed Prashant Bhushan, lawyer and activist, who the Supreme Court held guilty of contempt of court. On Monday, the bench of Justices Arun Mishra, B.R. Gavai and Krishna Murari imposed a fine of Re 1 as penalty, and if Bhushan does not pay by September 15, he will be jailed for three months and debarred from practicing law for three years.

At least four newspapers – The Hindu, The Times of India, Hindustan Times and The Indian Express – supported Bhushan’s refusal to apologise for his tweets after he was pronounced guilty by the Supreme Court. Their editorials reflected their commitment to freedom of expression, even as The Hindu and the Indian Express criticised the Supreme Court for unduly dragging Bhushan to court for what he opined in his tweets.

Bhushan was punished for criticising the conduct of the apex court in some recent cases while pointing out an alleged complicit role of the last four Chief Justices of India (CJIs) in two of his tweets. This became a rallying point for advocacy of freedom of expression among civil society, people’s movements and concerned citizens.

The anti-corruption crusader garnered even greater support when he refused twice to tender an apology for his tweets, forcing the Supreme Court bench to back down and sentence him to a token punishment. Bhushan said immediately after his sentencing that he will “cheerfully submit” to the penalty given to him by the Supreme Court, just as he would have “submitted to any other lawful punishment”.

“My tweets were not intended in any way to disrespect the Supreme Court or the judiciary as a whole, but were merely meant to express my anguish, at what I felt, was a deviation from its sterling past record,” he said, while arguing for a “strong and independent judiciary”. Bhushan also reserved his right to appeal against his conviction in the future.

“The penalty may be mild, but its import is quite grave,” The Hindu’s editorial said, while arguing that the response of the top court to some critical tweets exposed its “dark, intolerant” side. It also said that the response to the tweets which criticised the current CJI and some of his predecessors, “diminishes the Court’s stature much more than the upstanding lawyer’s tweets that contained insinuations and opinions that the judiciary found unpalatable”.

The national daily said while the Supreme Court bench “painted itself into a corner”, Bhushan emerged as a torchbearer of conscience through the whole episode, leaving the top court with only a “face-saving” option to impose a token fine on the lawyer.

“It is unfortunate that the Court did not heed the Attorney General’s wise counsel that it should display magnanimity by not imposing any sentence, and by considering the tweets as bona fide expression of criticism aimed at improving the institution’s stature,” the editorial said.

As far as the judgement goes, The Hindu said that although the court said that it wasn’t fighting for the reputation of the individual judges but “the standing of the institution in the eyes of the public”, its conduct by taking up the matter suo motu and its subsequent hearings “was fated to shine a light on the Court’s conduct rather than on the actions of the contemnor”.

At the end the newspaper says the Supreme Court’s decision comes across as an “unfair” verdict that doesn’t purge Bhushan of any contempt but is a punishment for Bhushan’s refusal to apologise or express regret.

The Indian Express argued that when Bhushan stood his ground despite persistent warnings, the Supreme Court by punishing him for violation of a “vague and colonial” law missed an opportunity to assert its “customary wisdom and institutional grace”.

“It is not just that the court fails once again to persuade that it is acting, not just to protect itself, but, as it claims, to preserve the people’s trust in the administration of justice. It is also that the punishment seems indefensibly disproportionate. If Bhushan does not pay Rupee 1 by September 15, he would be jailed for three months and debarred for three years — having tried and failed to extract an apology, the court has attached to its token fine an unbecoming or-else,” the editorial said. Now that Bhushan has submitted to the punishment, the daily said that the Supreme Court has yet another chance to reconsider its verdict.

The Express editorial goes on to point at the alleged failings of the Supreme Court to address multiple concerns of Indian society and polity. “In recent months, it has invited questions about its lack of alacrity on cases that involve the liberties of the citizen and encroachment by the state. On matters ranging from habeas corpus to electoral bonds, it has attracted criticism for giving the benefit of doubt, and delay, to a powerful executive.”

“In such times,” the daily said, “it is even more necessary for the court to acknowledge that its prestige as the custodian of constitutional values and individual rights is best protected not by rushing to use its punitive powers against those who would criticise it, but by living up to its most capacious institutional self. And by showing its ability to self-correct.”

The newspaper recommended that Bhushan give another chance to the Supreme Court to strike down the conviction by appealing against the Monday judgement.

The Hindustan Times noted that the mild punishment appears to be the court’s acknowledgement that Bhushan’s offence did not merit any strict punishment. However, that the judgement qualifies Bhushan’s conduct as “reckless allegations” to shake “the edifice of judicial administration” points towards a contradiction between the court’s action and its understanding.

While doing so, the editorial said, “it has limited the boundaries of free speech, saying that criticism of the judiciary must be “measured, strictly rational, sober and proceed from the highest motives without being coloured by partisan spirit or pressure tactics or intimidatory attitude”. These are all subjective terms which can be interpreted in ways to quell criticism.”

“The judiciary must be open to feedback from citizens, even as citizens accept its supremacy. The Bhushan case represented an opportunity to set right the contempt jurisdiction. Unfortunately, the court had ended up setting a wrong precedent,” HT said.

Although TOI didn’t take a clear stance, it did point out that the Supreme Court should always come out from controversy by asserting its magnanimous nature.

“The incongruity of judges becoming judges in their own cause was also flagged in recent weeks. Supreme Court must welcome bonafide criticism against it and ignore the opinionated barbs that are certain to keep landing off and on,” its editorial said.

The national daily hinted at the possibility of the executive’s influence in the sentencing when it said. “Even the Attorney General of India KK Venugopal was opposed to punishment for Bhushan, a factor that may have weighed on the judges while pronouncing the token punishment.”

Wanting the controversy to end with the sentencing, the daily said, “After a robust debate over the futility of Supreme Court penalising its critics through the Contempt of Court Act, both the advocate and the judges must let the matter rest here.”